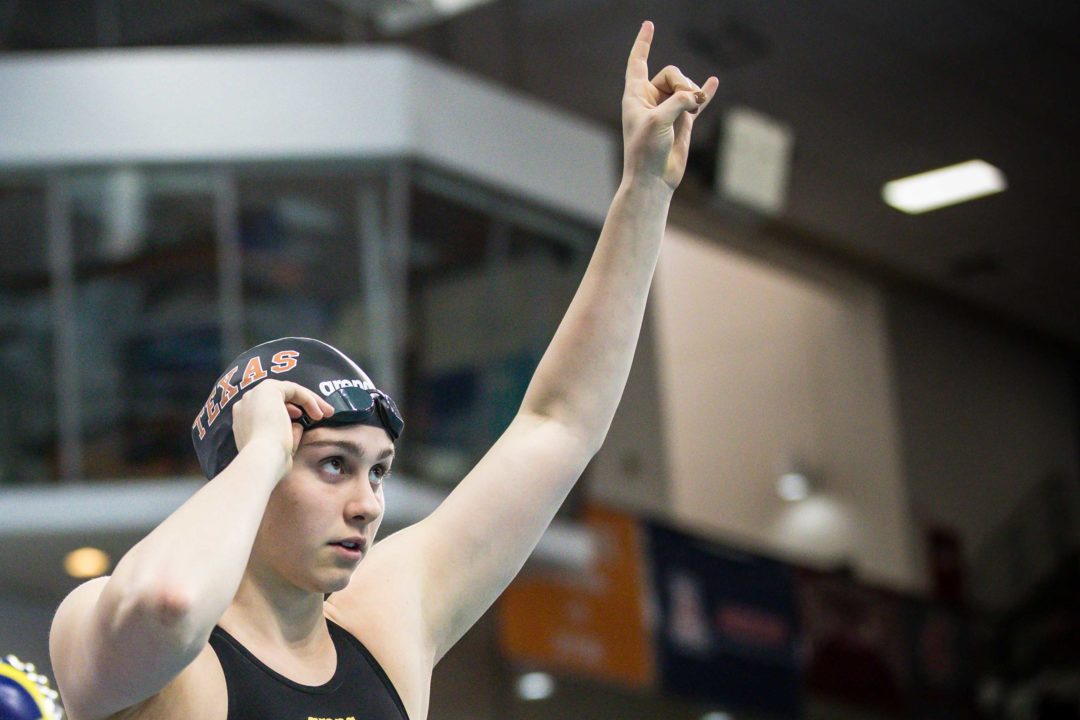 Ariola has been dealing with undisclosed health issues for the past several years. She shed some light on the conditions she’s been battling in her IG post, saying she got a viral illness her freshman year that took months to recover from. “Turns out, I never really did,” Ariola wrote about the illness in her post. She goes on to explain that she later developed chronic fatigue syndrome and POTS (postural orthostatic tachycardia syndrome), a condition that affects the volume of blood flow, and leads to rapid heartbeat, lightheadedness, and even fainting.

It’s due to these conditions that Ariola says she’s medically retiring from competition, saying “I’ve fought it for so long, put my everything into trying to get back. I’ve realized that’s not what my body needs anymore.”

Ariola was a member of the 2018-2019 USA Swimming National Team, and 3x National Junior Team member. At the 2017 World Junior Championships in Indianapolis, Ariola was named one of Team USA’s captains. She went on to win Bronze in the 50 back at those World Juniors, plus 3 relay Silver medals. Ariola also was a member of the Gold medal winning women’s 4×100 free relay at the 2016 Junior Pan Pacs.

In her freshman year with Texas, Ariola tied the school record in the 50 free with a 21.73. She was also a 2x All-American and a 2x Honorable Mention All-American that season, helping the Texas 200 free and 400 free relays to A finals appearances at NCAAs. Ariola was also the 2019 Big 12 Champion in the 50 free, and a member of 4 Big 12 title-winning relays that year. For her efforts, Ariola was named both the Big 12 Conference Newcomer of the Year, and the 2019 Newcomer of the Meet at the Big 12 Championships.

Ariola is originally from Illinois, where she grew up as a member of the Waves Bloomington/Normal  Y swim team. She still currently holds 21 individual Illinois Swimming records.

Grace was and will always be one of my favorite people to have shared a pool deck with. To put it simply.

For so many reasons outside of the numbers on a clock- she leaves the sport better than she found it. All the love in the world to you, Grace.

Grace- I have “watched” from the sidelines and through family as your incredible ascension through this sport grew and grew. We were proud of your accomplishments in the pool, but more so in the person you became, and are today. Such a humble, selfless, classy and inspirational young woman you have become. I know swimming was your focus and driver for most of your life, and thus so important to you. I am here to tell you that this important chapter in your life helped shape you, but it does not define you! Great things lie ahead of you….the world needs you and your inextinguishable passion to brighten those around you. Embrace with fondness for all you have accomplished in… Read more »

Thank you, Grace, for your leadership in and out of the pool. I know you’ll continue to be a very important part of the Longhorns! #HookEm

I cannot imagine what she went through, I hope she will find happiness in whatever she decide to do.

POTS is no joke and is absolutely life changing. Proud of Grace for doing what’s best for her and excited to see what comes next.

Agreed. One of my kids developed Autonomic Dysfunction (POTS is a type of this dysfunction) after a prolonged bout of mono… took 6 months to test negative for mono and her autonomic nervous system was not right after. It took 4 doctors and months to finally get a diagnosis and find medications to help. She never gave up training, just got lucky that her coach believed in her grit and tenacity as much as she did and was willing to work with her to keep her in the water. She’s still not back to where she was a few years ago, but she is in the water and truly thankful she has a chance to swim and compete.

I was diagnosed with POTS two years ago after years (and an entire HS and college career) of pain, unexplained symptoms and a complete decrease in athletic performance across the board after catching a virus in middle school. It’s absolutely heartbreaking seeing so many people struggle with this condition because I know how hard they’re working and want to be at their best but their bodies just shut down – and it’s so unpredictable. You can be on top of the world in practice and swimming great times and at a meet your body might just give out on you and you have to scratch. I agree 100% with what Grace said about medical retirement… it is truly an act… Read more »

Congrats on a great career! Best of luck moving forward

Yet another female sufferer of POTS, CFS (see Ella Eastin and Simone Emmanuel). As a matter of urgency, the US has got to look at how it is training its young female swimmers. Waking up at 4AM for your first practice of the day when you are 13 causes havoc to your body down the road. If USA swimming coaches read “Why We Sleep” they would end early AM practices stat. Good luck to Grace. She is something special.

0
-9
Reply
OldSwimmer
Reply to  No Diva

POTS is the result of contracting a virus, NOT overtraining, as is her Chronic Fatigue Syndrome. Grace’s issues are not remotely related to the Overtraining Syndrome experienced by Simone Manuel.

Schools are full of germs. It’s helpful that the kids in college these days are wearing masks most of the time, but it seems with any new group of student/athletes together, the sickness soon follows. Best of luck to Grace!

Had the pleasure of working with Grace in the past. What a tremendous and bright young lady. Best of luck to her in the future.