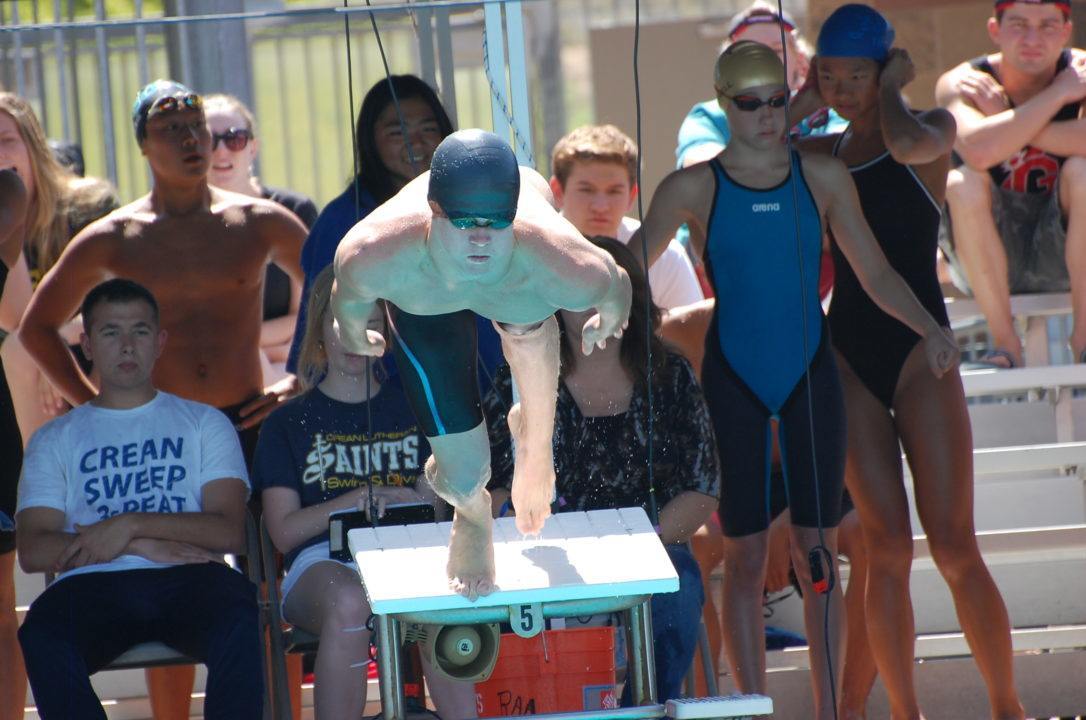 What should have been an easy road to the girls’ title for Glendora High School got a little more complicated with the strong morning performances from Crean Lutheran on Friday at CIF-Southern Section Division II prelims on Friday. Crean, who had won the Division III Championships two years in a row –and set nearly all the division records for girls– moved up to Division II last year and promptly won the team title. This year, with Ella Eastin now at Stanford, Crean wasn’t necessarily a shoe-in for the girls’ title, but apparently no one told the Saints. Crean outperformed in six events to net 29 points over their psych sheet seedings.

On the boys’ side, Damien had been expected to lead the field by a large margin; while they were a tad under expectation based on the psych sheets, they remain unchallenged at the top. The battle is on for the runner-up trophy, though, as Mission Viejo, Los Osos, Laguna Beach, Redlands EV, and Murrieta Valley all sit within 9 points of each other.

Glendora junior Alexis Margett wasted no time breaking the section record in the 100 fly. After finishing third in 54.73 behind Emily Eastin of Crean and Glendora’s Catherine Sanchez last year, Margett shot out with a 52.59 to lead the qualifiers in prelims this year. She erased a 2009 record set by Yumi So of Crescenta Valley and, later, USC. Sanchez was second in the 100 prelims, while Eastin was fifth. Margett was also the top qualifier in the 200 IM in 2:00.74, a full 1.7 seconds faster than sophomore Mikki Thompson of Ayala.

As goes the 500 so goes the meet, maybe. Every point will count in finals tomorrow, as Crean and Glendora will be jockeying for position, and the 500 could be a deciding event. Senior Brittany Kampfer of Crean posted the morning’s fastest time (4:52.02) but not by much; Glendora sophomore Katie Sulkevich (4:52.19) and King sophomore Lauren Vitort (4:52.78) are threats for the title.

Eastin was the fastest 100 backstroker in the field by all of 2/100; she put up a 54.96 in prelims, while Los Osos freshman Emily Trieu was second with 54.96. Mira Costa freshman Alexandra Crisera dropped nearly 2 seconds to qualify third in 55.23. Diamond Bar sophomore Kelsey Lloyd was the top qualifier in breaststroke with 1:03.49, ahead of Glendora’s Jackie Basham (1:03.79) and Crean junior Jimena Martinez (1:04.08).

Glendale junior Trenton Julian led the field in both the 200 free and 100 fly, the latter of which he is the defending champion. Julian’s 200 free of 1:39.55 was just off his qualifying time, and about 4/10 ahead of that of Chino Hills senior Michael Tenney (1:39.96). Tenney dropped just over 2 seconds to qualify in the number 2 spot. In the fly, Julian posted a 49.08, .6 faster than Arroyo Grande junior Trent Schachter and San Marino junior Kyle Day (49.83).