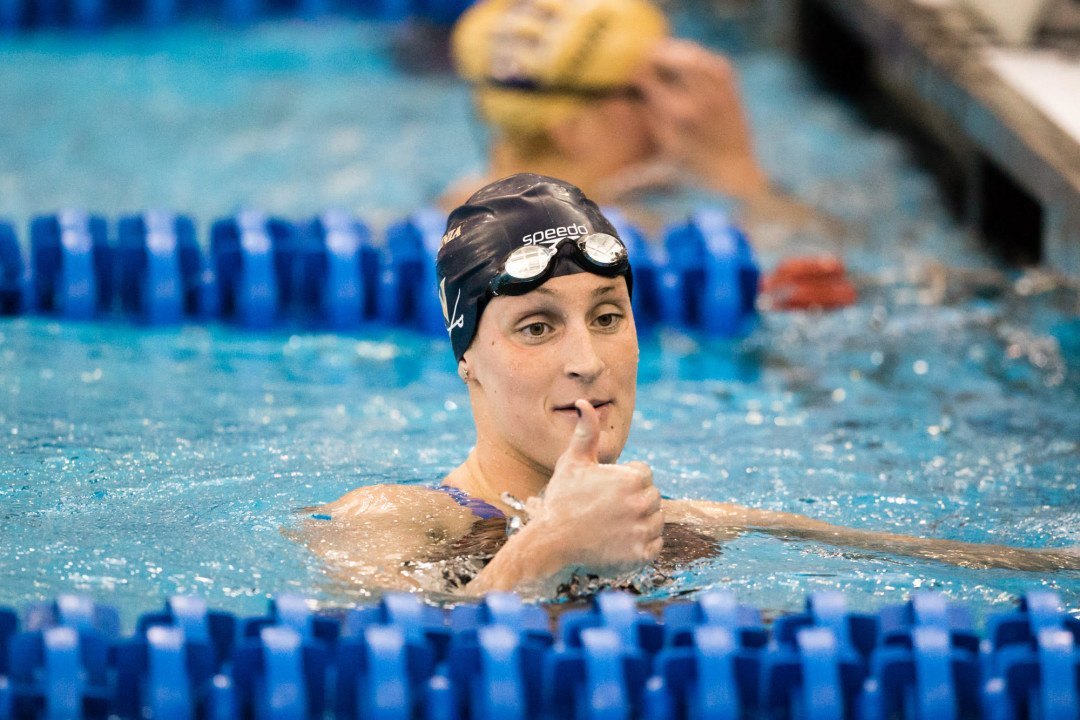 The 2016 ACC Women’s Championship had their first preliminary swimming session this morning. The story of the session was NC State, last year’s 5th place team. The Wolfpack put six swimmers in the top eight for tonight’s finals, including the top qualifier in the 200 IM. While that is two fewer than defending champion Virginia, NC State is threatening to upset the in-state balance of power that still favored UNC last year.

Photos are all from this morning’s prelims, courtesy of Tim Binning.

Leah Smith broke her own ACC Meet Record in the 500 free in prelims on Thursday. (Courtesy: Tim Binning/TheSwimPictures.com)

Leah Smith has never lost this event at the ACC Championships, and it doesn’t look like that will change tonight. This morning she had a much faster preliminary swim than she needed, swimming nearly six seconds ahead of her next closest competitor, and came out as an ACC Championship Record. The old mark of 4:34.35 was hers from last season – she also holds the overall NCAA and ACC Records from last year’s NCAA Championship meet, implying that she should have more to drop still for finals.

This is traditionally a good event for the Cavaliers- last year they had four in the top eight. This year, it was only three. Louisville and NC State made it two apiece, with UNC rounding out the final. Both NC State swimmers, Hannah Moore (4:38.02) and Rachel Muller (4:39.61), improved more than ten seconds off of seed to make the A-Final. Muller was a B-finalist last year, while sophomore Moore was competing for Michigan a year ago.

Alexia Zevnik of NC State, last year’s 5th place finisher, now finds herself in the top position heading into tonight’s finals. However sitting right behind her is the top returner in this event, Virginia’s Kaitlyn Jones. Notably Zevnik’s backstroke split was nearly identical to UVA’s Courtney Bartholomew, who slotted in at 4th.

This will also be a good scoring event for Louisville, who got two in the top eight. The two Louisville swimmers had the fastest breaststroke splits of the entire field.

Kelsi Worrell of Louisville and Riki Bonnema of NC State didn’t have a particularly close race a year ago. Bonnema won easily after setting the ACC meet record in the preliminaries, and this was the only individual ACC race that Worrell didn’t win. Worrell, however, would go on to set the league record the next month at the NCAA Championships.

Worrell touched first this morning, the only swimmer under 22 seconds, followed by Bonnema. NC State will pile up the points in this race, they got nice boosts from Ashlyn Koletic and Natalie Labonge. Both were consolation finalists last year but found their way into the top eight this time around

As I said yesterday NC State clearly better program in men’s and women’s than UNC now. Wow. UNC will get better and with diving might still beat NC state at this meet but ncaas won’t even be close. UNC is fighting not to get 4th at this meet. Amazing the change in ACC over last 4 years.

Agree you with yes

Looking like NC State will battle for a title a bit, or at least with Louisville for second. NC State’s Rachel Mumma has a good chance at performing well again on 3m diving, so perhaps State stands a good shot against Louisville, who is strong but not quite as strong in diving as State is.