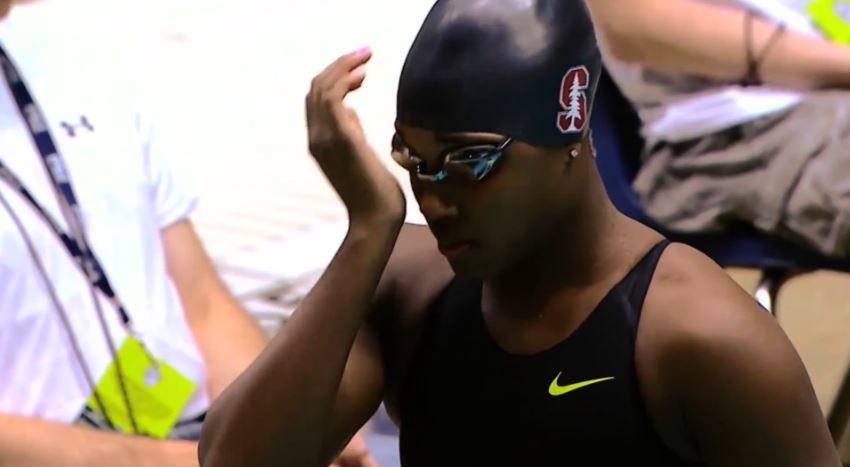 200 Freestyle Relay Kaylin Bing, California –  On winning the national title: “It was my first individual national title, so... Archive photo via Stanford Athletics

On winning the national title:

“It was my first individual national title, so it felt awesome. The team really stepped up, and it’s a phenomenal experience to have that.”

Team started out behind. What was it like to watch teammates come back?

“Being the first leg and making a couple of mistakes here and there… Having Missy and Farida behind me was such a confidence booster and I wouldn’t want to have anyone else behind me on a relay.”

“Yeah, it was similar to the race I had at the Georgia Invite. In the morning my coach just said I want you to have a strong race but be sure to bring it back fast. That morning, I thought I was going to touch 4:39 and I touched 4:32. Last year I didn’t make the A-final which I was very upset about so this year I went in there with a mindset of doing anything I can to have the best race possible.”

“People were telling me ‘Hey, you’re ahead by 5 seconds. It’s not going to be that hard.’ But I knew it was going to be difficult with the field of competitors. However, I did realize it wasn’t going to take another huge drop for me to win the race. So, just being realistic while trying to have a great race.”

On what the meet means to her

It means so much to me. If someone would’ve told me coming into college swimming that I would’ve won the 200 IM at NCAAs, I probably would’ve laughed. It’s just really cool thinking about all the training that I’ve done and being able to do an event kind of out of my specialty and be able to win it, especially with Liz (Pelton) getting second.

Georgia swam lights out this morning so I think that really got us motivated. I think we’ve had some really awesome swims tonight, but I think the most important thing is that we stay focused on us. We’re the only people that we can control and as a team we’re going to try keep lifting each other up and see what we can do to reach our own goals.

On being a national champion

I’m pretty excited. 50 free, first individual event at NCAAs, so I’m really excited for the rest of the week.

On what she was feeling before and after the race

I was a little nervous. I made a couple mistakes on my relay swim, so I just tried to focus on some of the things my coach was telling me. At the same time, you don’t want to think too much because you might mess up something else. So I really just tried to go out there and have as much fun as I could.

On winning a national championship

“It means  a lot.  A ton of hard work has been put into it and I’m really excited.”

On her preparation before the finals

“My coach tells me to just try and be calm, relax and do the dives that you’re capable of. I’ve done these dives so many times you just have to put them on autopilot  and go.”

“A little bit [of extra confidence] but tomorrow is a completely new day. What happened here, keep it here and regroup for tomorrow.”

“I think for starters, congrats to Virginia and to Cal because they had two great relays and it wasn’t easy to get a win there. It was a very impressive performance by both of those squads. Simone’s teammates put her in that position to do what she’s capable of. She’s capable of doing some pretty crazy things. To get her hand on the wall first was an amazing thing for our program and for our fans to celebrate that.”

“In the moment, the time doesn’t really matter. The split is awesome, but the win means more and that’s a testament to her teammates.”

On the 200 freestyle relay:

“We had three freshman on that relay and it’s usually hard to rely on freshman for their first NCAA time.”