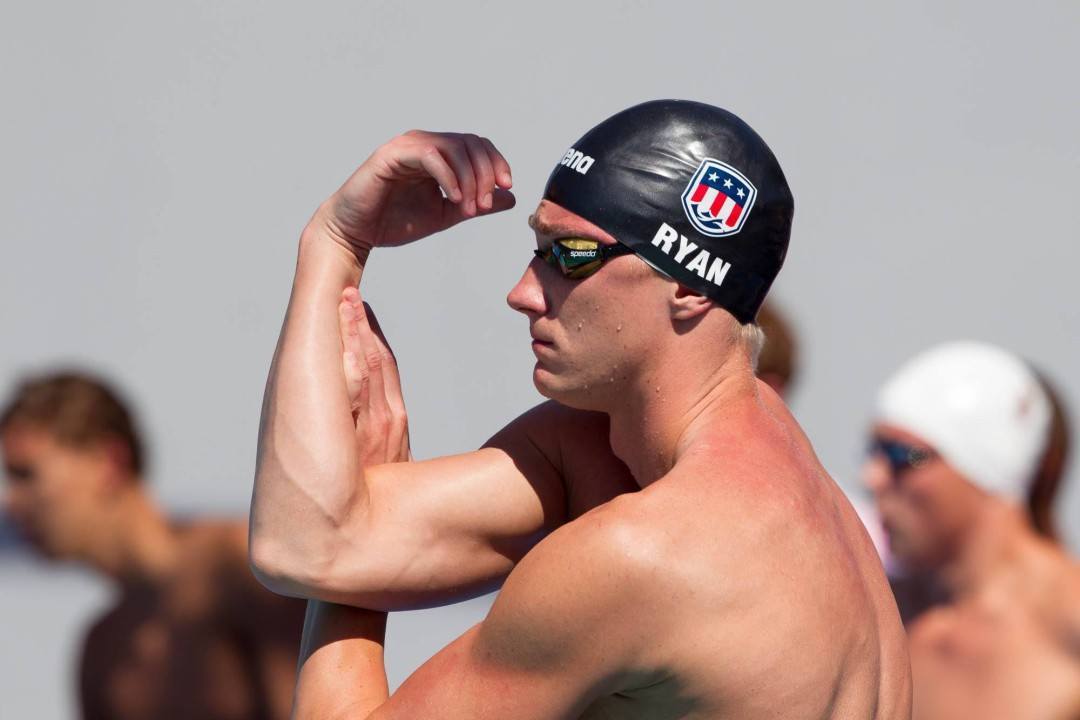 With Michigan in the lead by 70 points, it certainly helps the Wolverines’ cause having a monster number of swimmers coming back for tonight’s finals.  12 swimmers for the maize and blue will be in tonight’s A-Finals, including a quadruple threat in the men’s 100 fly consisting of Evan White, Jeremy Raisky, Pete Brumm and Aaron Whitaker.

Ohio State has the opportunity to capitalize on its successful prelims showing, with 9 swimmers up and 6 down for tonight’s races, including sprint star Josh Fleagle in the 200 freestyle and double-up dynamo Matt McHugh in both the 100 fly (top seed) and the 100y backstroke events.

Wisconsin may have its “moving day” of sorts, with their quality share of swimmers in the field tonight attempting to inch the team out of its 5th position in the point standings after yesterday’s Finals.  The Badgers went 9 up and 6 down on today, including 2 men in the 200 free A-Final with Nicholas Caldwell and Brett Pinfold, as well as seniors Nich Schafer and Drew Teduits in the 100 breaststroke and 100 backstroke top races, respectively.

There was some major heat thrown down during tonight’s 200 free relay with the top 2 teams earning NCAA automatic qualifying times.  As the only team coming in already with an “A” cut, the Michigan squad swam away with the B1G title and a new pool record, as the squad of Paul Powers, Vinny Tafuto, Jason Chen and Bruno Ortiz combined for an incredible time of 1:16.80.  Tonight’s achievement marks only the fifth time in history that Michigan has won the 200 free relay title. However, as fast as that was on this night, Alabama’s 200 free relay was slightly faster at last weekend’s SECs where they charged to the wall in a 1:16.13.  Below is a comparison of those splits:

The Hoosiers foursome of Anze Tavcar (19.83), Blake Pieroni (19.45), Yianni Thermos (19.33) and Ali Khalafalla (18.99) combined to earn a 1:17.60 for the runner-up position tonight.  Along with Ortiz, Khalafalla was the only other swimmer to dip under the 19.0-threshold. Also worth noting is that Anze is a sophomore, while Pieroni and Khalafalla are freshman, so the certainly bodes well for the future of this Hoosier relay.

Ohio State came in third in the race in a 1:18.09 with its fastest split coming from sophomore Matt McHugh (19.27) swimming in the first of his three events tonight.  McHugh will also be swimming the 100 fly and 100 backstroke events.

Your B1G 400 IM title winner is Michigan’s Dylan Bosch, who touched the wall almost a body length ahead of the rest of the field as he crushed a new pool record of 3:40.61.  Bosch was in charge from start to finish and especially started to pull away during the breaststroke leg; splits below (from live results).  The South African’s time tonight also clears the NCAA automatic-qualifying standard by just under two seconds.  Bosch was last year’s runner-up and he was actually just a tad faster in that 2014 race, with a time of 3:39.07.

There was a tenacious battle for second place between Indiana’s Steve Schmuhl and Minnesota’s Jakub Maly, with the two battling head-to-head on the freestyle portion all the way to the wall.  Schmuhl ended up on top for second place with a 3:41.88, the 3rd-fastest time in Indiana’s history.  For his part, Maly clocked a speed 3:42.54 for 3rd, lowering his Minnesota record even further….as a sophomore.

Buckeye Matt McHugh blasted through a sea of Wolverines to take the 100 fly title in an NCAA automatic qualifying time of 45.75, lowering his own pool record from this morning in the process.  McHugh commanded the lead from the get-go and held on through powerful underwaters off every turn to overpower all in his wake.

The Wolverines racked up 59 points even without the top spot, however, as they cleaned up a 2-4-5-6 finish.  Aaron Whitaker led the squad with a swift 46.37, knocking half a second off of his prelims swim.  Evan White (46.65), Pete Brumm (46.79) and Jeremy Raisky (46.94) finished in 4th, 5th and 6th, respectively.  Last year’s NCAA invite time landed right at the 46.56 mark, so the Wolverines still need to step things up a notch at any last chance meet they may attend to secure this kind of depth on the national level.

3rd place tonight went to Minnesota sophomore Daryl Turner who clocked new personal best of 46.52.  Jerzy Twarowski put some points up on the board for Iowa with his 7th place time of 47.16, while Cannon Clifton finished in 8th for the Wisconsin Badgers in a time of 47.59.

A wicked-fast 200 free final transpired at the Iowa Aquatic Center, resulting in the top 3 swimmers earning NCAA automatic qualifying times. Event winner and end-of-race-mega-flexer, Josh Fleagle from Ohio State, turned it on and left it burning throughout the entire 200, keeping all his splits under the 24.0-mark.  For his effort, Fleagle now sits at right around the 3rd-fastest mark in the NCAA, barring the other conference meet’s results.  As comparison, last year’s B1G’s saw one swimmer dip below 1:34 and even one more swimmer dip below 1:33 (Wynalda, 2014 200 free champion), so even tonight’s superb race was slightly off the 2014 edition.  See below for the break-down of Fleagle’s feat tonight (from live results):

Anders Nielsen from Michigan wasn’t too far behind for the runner-up spot, as he touched the wall in 1:33.49, a full second faster than his morning swim. This places Nielsen in the 5th-fastest ranked position in the country. He was closely followed by Indiana freshman Blake Pieroni who finished just 3/100 later in 1:33.52.  Pieroni’s Indiana teammate Jackson Miller wound up 5th in a time of 1:34.50.  Michigan’s second representative in the race, senior Justin Glanda dropped almost a half second from prelims to finals to earn himself the 4th spot in 1:34.30.

Michigan’s Bruno Ortiz earned the third individual B1G title of his impressive career, as he powered his way to the wall in a blistering 51.83 for the win.  Tonight’s time was just .06 slower than his pool-record-breaking 51.77 from prelims, but still quicker than the 52.15 that earned him 3rd place in last year’s race. Teammate Richard Funk clocked an NCAA automatic-qualifying time for his runner-up effort tonight, giving Ortiz a run for his money in the middle 50, but fading just a tad in the last 25 yards to close his race at 52.19.  Michigan’s third swimmer in the race was sophomore Chris Klein who found himself in a much better position than his B-Final appearance last year as a freshman.  This time around Klein captured the 6th spot in 52.93; a solid effort for Ortiz’ protege.

Ohio State’s DJ MacDonald lowered his own school record, finishing in 3rd tonight in a 52.43, which, although is still a stellar time in its own right is a skosh slower than last year’s NCAA invite time of 52.23.  Purdue senior Lyam Dias is in the same boat, where he finished 4th tonight in a time just under last year’s invite time; 52.72 was what Dias nabbed tonight in the race.

Yet another pool record was erased tonight, signifying the speed we were privileged to see in each and every event. The 100 backstroke was no exception, as Penn State’s Shane Ryan defended his B1G title splendidly, winning an NCAA automatic-qualifying time of 45.54.  Ryan led from start to finish, looking solid and in control off each wall and with each stroke.  A terrific performance for the junior whose time most likely will still fall within the NCAA’s top 5 after this weekend.  Ryan shared a handshake with teammate Nate Savoy, who swam by Ryan’s hip throughout the race, tackling each stroke with his own intensity.  46.10 was the time Savoy produced, just 5/100 slower than his morning effort.

Tonight’s 100 fly champion, Matt McHugh, from Ohio State came to play in this final, too, earning 3rd place in the exact same time as his morning swim, 46.37.  Last year’s NCAA invite time was 46.57, so he’ll most likely be right on the edge for 2015.  Steve Zimmerman, also from Ohio State, finished in 46.60 to capture the 5th position in tonight’s race.

The two Wolverines in the race wound up 6th and 8th, with Aaron Whitaker pounding out a 46.63 and Tristan Sanders slinking under the 47.0-mark with a time of 46.94.

Drew Teduits raked in 15 points for Wisconsin with his 4th place showing in 46.46, while Iowa’s Grant Betulius nabbed 7th in 46.67.

Team Scores after the 100 backstroke event:

Awesome split for Bruno Ortiz on the anchor. 18.61.

There were a few DQs today for swimmers going past 15 meters in backstroke and butterfly.