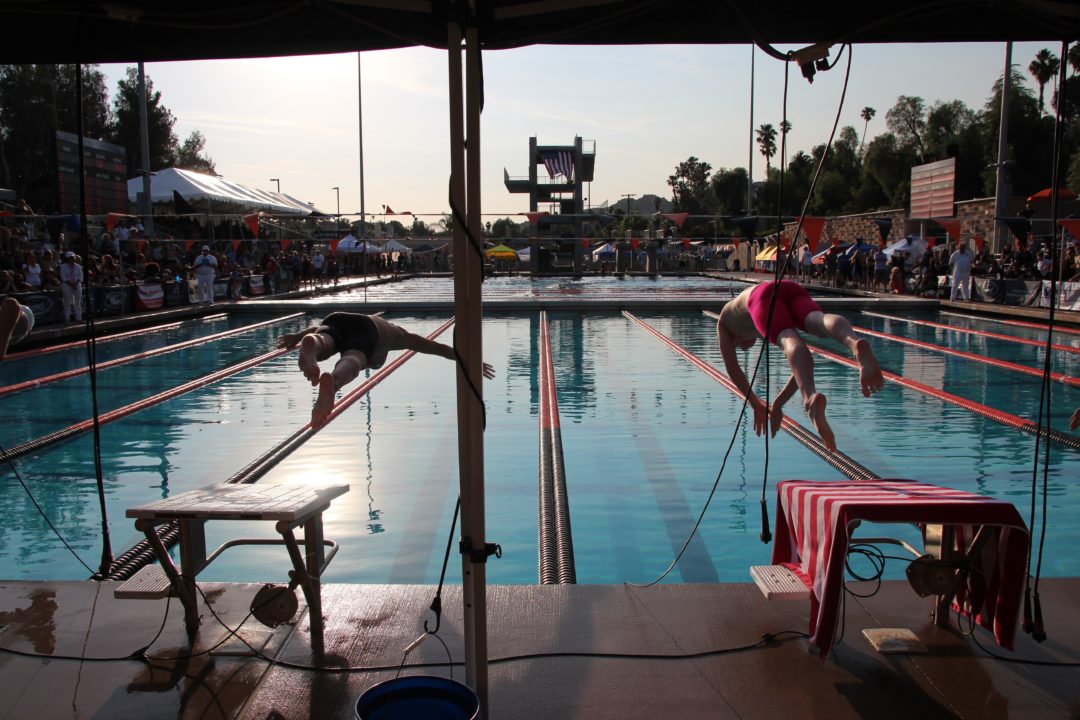 There were few surprises in the prelims of the D3 girls’ meet. Jasmine Margetts of North Torrance led the qualifiers for finals in the 200 free with 1:51.33, a tad better than her seed time and Teresa Lo (Walnut) was second. Casey Cunningham from Saddleback Valley Christian dropped 3.2 seconds from her seed time and qualified third. Walnut’s Lo earned the right to the middle lane in the 500, qualifying first in 5:00.77. Cunningham was second; Kimberly Linscott of Royal, third.

Deanne Umbay of Sierra Canyon went 2:05.05 to qualify first in the 200 IM. Janika Ho of Windward and Yida Wang of Mark Keppel each had huge drops to qualify second and third. Umbay was also the fastest out of prelims in the 100 back, going 56.48 and topping Margetts by .35. Heritage freshman Katelyn Thomas qualified third.

Beverly Hills’ Amy Okada went 54.25 in the 100 fly, inching closer to Ella Eastin’s D3 record (53.93). Qualifying second was Bianca Preciado of California HS, just ahead of Keppel’s Martin. Okada led the field in the 100 breast as well; she went 1:03.38, a half-second faster than her entry time. Cailey Renken of Camarillo qualified second, while Preciado was third.

North’s Javier Bernal put up a prelims-leading 1:53.64 in the 200 IM, followed by Benjamin Hardin of Calabasas and Daichi Kakazu of North Torrance.

Adrian Hui of The Webb Schools held onto his number one seeding with the fastest 50 free in prelims (21.49). Aaron Bauer of Pacifica/Garden Grove and Nathan Ketcheside of Riverside Poly will be on either side of him in finals. Ketcheside led the 100 free qualifiers with 47.44; Bauer went 47.45, and Santa Moncia’s Brandon Bertolino qualified third with 47.57, setting up a very competitive final.

Rodrigo Baca of Kennedy dropped 8/10 to lead a tight field of 100 butterfliers with 51.42. Also going sub-52 were Walnut’s Derek Wan, JP Mortenson of Windward, and Seth Villeda of Santa Fe.

In the 100 back, Jerry Chen of Walnut went 51.64 in prelims, dropping about 4/10 from his entry time to qualify first. Windward’s Mortenson and Calvin Giang of Gabrielino swam the second- and third-fastest times.

Moorpark junior Nicholas Masinsin led the field in the 100 breast with 57.50. Hardin of Calabasas, Jacob Christensen of Valencia/Placentia, and Bernal of North were also under 1:00.