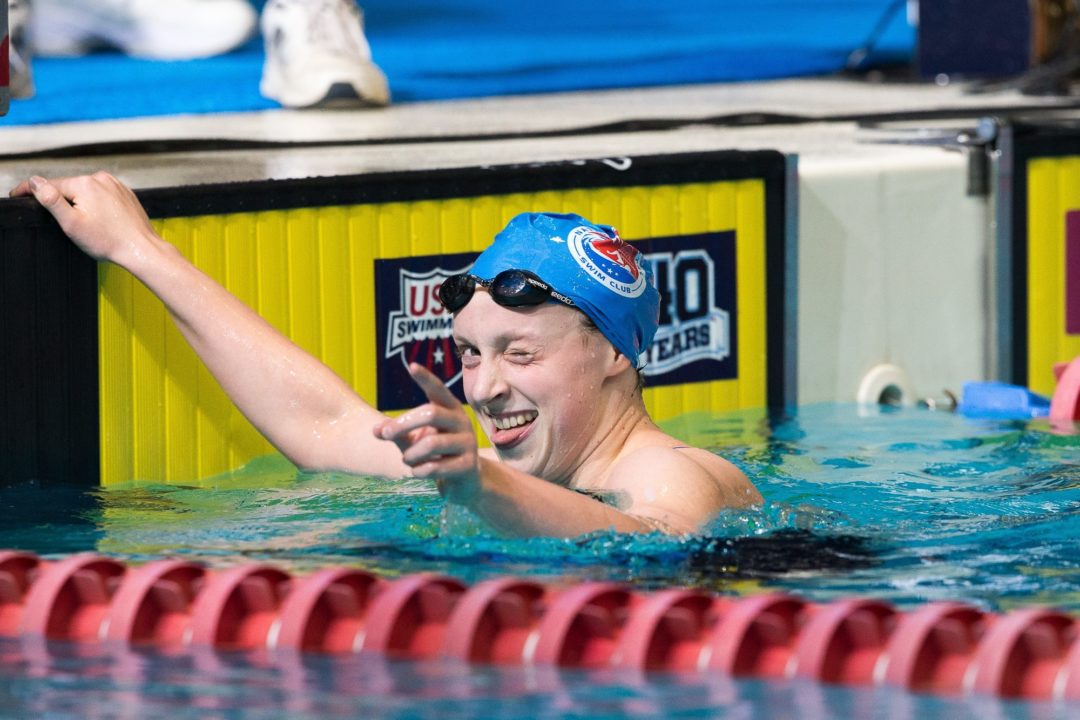 To see all of the 2014 Swammy Award winners, presented by TYR, click here. 2014 HONOREES: Top 14 Races of... Archive photo via Tim Binning/TheSwimPictures.com

With the many worldwide competitions this year (Commonwealth Games, European Champs, Youth Olympics, CAC Games, Pan Pacs, U.S. Nationals, SC Worlds, among several others), it was quite the challenge to narrow down “the top 14” races of the past year.  Keep that in mind if you do not see your favorite moment on the list; it was probably tied for 15th!

14.  12-yr-old Ethan Dang breaks 200y breaststroke NAG: In one of the most impressive age group swims of 2014, Dang raced to a 2:05.56 new 11-12 National Age Group (NAG) Record in the 200y breaststroke at the 2014 Husky Invitational.  Dang’s new time not only qualified the speedy youngster for 2014 Winter Junior Nationals, it made mincemeat of the 2:09.40 time clocked by another American age group breaststroke sensation, Reece Whitley, in 2012.

13.  Brazil’s Cesar Cielo overtakes Lochte in Men’s 4 x 100m Medley Relay at SC Worlds: Cielo proved once again why his freakishly-fast freestyle is always a threat, individually as well as part of a collaborative effort, as his anchor leg helped defeat the Americans by just .35 in the 4 x 100m medley relay in Doha.  Headed into that final leg, the Brazilians trailed the Americans by .85, when Cielo took to the pool to close-in on Ryan Lochte.  And, close-in he certainly did (and more!), with Cielo’s split of 44.67 beating Lochte by over a second, giving the Brazilian foursome (Guilherme Guido, Felipe Silva, Marcos Macedo, Cielo), the gold medal in the event.

12.  Abbey Weitzeil wipes out 100y freestyle American and U.S. Open records at U.S. Junior Nationals: An outstanding age group swimmer who has now made an impact on the national and international scene, Abbey Weitzeil sprinted her way to a trifecta of records, claiming the new 17-18 NAG record, new American and new U.S. Open record in the 100y freestyle at Winter Junior Nats in Washington earlier this month.  The lightning-fast 46.29 swim was performed as the lead-off on her Canyons Aquatic Club’s 4 x 100y freestyle relay, with Weitzeil’s new mark comfortably clearing the 46.62 from Simone Manuel from November.

11.  Chase Kalisz is crowned 400y IM king at 2014 NCAA Championships: In a completely dominating effort at the 2014 NCAA Championship meet this Spring, University of Georgia’s Chase Kalisz clocked a 3:34.50 in the men’s 400y IM event, to collect new American, U.S. Open, and NCAA records.  This was a massive feat in itself, but is extra eye-opening knowing the previous mark was held by Olympian Tyler Clary (University of Michigan).

10.  Markus Deibler and the “Mic Drop” swim: Germany’s Markus Deibler put the hammer down on the likes of Russia’s Vlad Morozov and America’s Ryan Lochte, en route to winning the men’s 100m IM in world-record-setting-time at the 2014 Short Course World Championships.  Deibler’s new world record mark of 50.66 sneaked past Lochte’s previous mark of 50.71 set in Istanbul in 2012 and seemed to set Deibler up nicely for continued progress in future international meets.  Deibler thought otherwise, however,as the 24-year-old, rather surprisingly by most accounts, announced his retirement from the sport of swimming, just one week after his 100m IM world record swim.

9.  Simone Manuel’s insane “this is not a typo” sub-46 split: In November, Simone Manuel threw down the fastest women’s 100y freestyle relay split in history at the Art Adamson Invitational.  As the anchor in Stanford’s 400y medley relay, Manuel lit the pool on fire with her unfathomable 45.81 split, handily laying waste to the previous fastest relay split of 46.07 by Megan Romano in 2012.  Manuel’s feat marks the first sub-46 100y free split by a woman and simply exemplifies why Manuel is a sprint force for the ages.

8.  Ledecky’s “under-the-radar” World Record: At a rather unlikely place for a world record to be broken – Shenandoah, TX – the swimmers, fans, and coaches attending the Woodlands Swim Team Senior Invitational Meet were treated to such a monumental event. At the CISD Natatorium this past June, Katie Ledecky launched herself off the block and into the history books yet again, swimming to a then-new world record mark in the women’s 1500m freestyle in a time of 15:34.23.  Ledecky’s phenomenally fast swim was unexpected by most, as breaking the world record and her own personal best by over two seconds mid-year was just not on anyone’s radar.

7.  Spain’s Mireia Belmonte becomes first woman under 2-minutes in 200m butterfly: The first of many short course world records to fall at the SC Worlds in Doha belonged to the dynamically talented Mireia Belmonte (Spain), as she became the first woman to dip under the 2-minute threshold in the women’s 200m butterfly. Belmonte raced to a new world record time of 1:59.61, taking more than a full second chunk off of the previous full-bodied-suit mark from 2009 by China’s Liu Zige (2:00.78).  As an extra reward as a result of this race, Belmonte beat out her fierce competitor, the Iron Lady, Katinka Hosszu, on her way to clearing the new mark.  See the entire battle here.

6.  Ledecky breaks 400m free World Record on American Soil: In another jaw-dropping effort, Katie Ledecky simply did her thing and raced her way to a new women’s 400m freestyle world record at the 2014 U.S. National Championships in Irvine, CA.  Her 3:58.86 in finals not only earned Ledecky her second-straight U.S. National Title, it surpassed Federica Pellegrini’s (Italy) previous shiny-suit world record of 3:59.15 from the 2009 World Championships.

4.  Florent Manaudou takes down 50m freestyle world record – The French sprint monster that is Florent Manaudou managed to just slink past Roland Schoeman’s old mark of 20.30 on his way to clocking a new world record of 20.26 in the men’s 50m freestyle at SC Worlds.  Schoeman’s previous record was set in 2009 (the full-suit era), which makes this feat extra remarkable for Manaudou and certainly highlights the Frenchman as the one to beat in the sprint freestyle events on the international stage.  Here is video of Manaudou‘s record.

3.  Alia Atkinson’s inspirational 100m breaststroke: Jamaican history was made on Day 4 of the 2014 SC World Championships, as Alia Atkinson sprinted to a first-place finish of 1:02.36 in the women’s 100y breaststroke to tie the world record mark.  The 1:02.36 record is held by the almost-untouchable Ruta Meilutyte (Lithuania), whom Atkinson actually out-touched in this version of the race in Doha, giving Atkinson the meet record, world record (tie) and Jamaica its first short course world title.  Watch the thrilling race here.

2.  Sjostrom. 50m butterfly. Enough said: You have heard the command “do not blink” when watching freestyle splash and dash races, but this phrase now applies to the butterfly 50m sprint as well; as long as Sweden’s Sarah Sjostrom is in the field, that is.  At the Swedish National Championships in July, the 20-year-old threw down a time of 24.43, just demolishing the previous mark of 25.07 from 2009, as well as crushing Sjostrom’s personal best of 25.52.  To put it in perspective, the game-changing performance would have given Sjostrom a FINA B cut FOR MEN….and she produced this magnificent result with ZERO breaths!

1.  Ledecky re-breaks 1500m freestyle record at Pan Pacs: Just when Katie Ledecky blew our minds….she did it AGAIN!  This time, her world-record-setting swim in the women’s 1500m freestyle came at the 2014 Pan Pac Championships on the Gold Coast Australia.  Ledecky’s winning time of 15:28.36 cleared the old mark of 15:34.23 she swam at The Woodlands meet over the Summer (see #8 on this list).  She swam her signature killer back-half, actually negative-splitting this race by 800s: 8:16.90/8:14.11 (with 100 meters of overlap).  This “race” (aka display of superhuman powers) capped of the past 13 months of Ledecky lowering the 1500m freestyle world record by a total of 14 seconds.

Excellent recap for the best swims of the year !
My N°1 : Ledecky 400 free WR . One shiny suit record gone by an amazing young talent .
N°2 : The women’s 400 free WR by The Aussies ; amazing quartet , only Usa can come very close with Weitzeil and Manuel in the team in the months ahead .
N°3 : Sjostrom 50 fly is breath taking ; perfect no breathing & rythm flow all the way of that 50 .
N°4 : Hagino 200 free at the Asian games .
N°5 : Weitzeil 100 free Y not so long ago + her relay split in Doha to anchor that Us relay . Amazinggggggg speed & turn .

I don’t agree that manuel’s split of 45.8 ranks ahead of Weitzeil’s 46.2 FLAT START. Both of these girls are in a class all their own but I would be willing to bet that Weitzeil would be able to relay split at least a 45.8 if not better with the same effort given in the above video. Weitzeil deserves a lot more credit than she gets for how fast she is. In the coming years she will probably become one of the fastest American female sprinters to ever grace the pool.

She already split 45.8 at juniors

She is already is one of the fastest American female sprinters to ever grace the pool.

Are you blaming the journalist or the swimmers?

Katie Ledecky is the swimmer of the year (male OR female).

24.43… dropped 0.6 seconds from the super-suit world record. Proportionally, that would be like Katie Ledecky dropping her WR to a 15:12 out of nowhere.

That 50 fly completely re-defined what is possible for sprint butterfliers. Sjostrom hit a speed where an open turn is SLOWER THAN straight swimming fly head-down. Even Sjostrom’s SCM 50 fly was slower than her LCM 50 fly. Her 24.43 would have been the fastest American 50… freestyle.

Like the evolution of straight-arm (aka shoulder-driven) freestyle, Sjostrom’s 24.43 50 butterfly marked a new paradigm of what is possible for a stroke.

I do think that the old 50 fly WR was a bit soft because Inky never really swam it tapered. Given her 50 FR-100 FR-100 FLY excellence, I think that Bruijn could have done something quite impressive in the event if it had been more popular when she was at her peak.

But will she be able to repeat, or even come close to it?