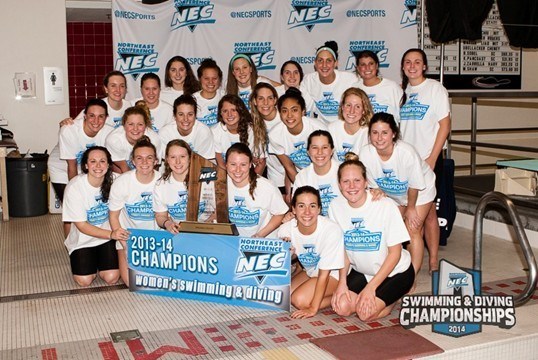 Having held the lead every day coming into the final session of the NEC Championship meet, Wagner remained on top of the leaderboard and went home with its first ever NEC title.

Wagner didn’t waste time putting points up on the board. Grace Baird started things for the Seahawks with a win in the mile in 16:53.17. Mary Margaret Folz from Saint Francis University took second, and Erin Daly of Bryant was third.

Anu Nihipali of Wagner dropped another 1.7 seconds off her prelims time, for a total of 5.6 in the meet, en route to winning the 200 back. The only swimmer to crack 2:00, she finished in 1:59.38 and established a new NEC record in the process. The next three medalists touched almost exactly together: Sara Dieterich of SFU was second (2:02.60), and Elisabeth Schauer of Bryant just edged out Kara Lacoste of Wagner for third, 2:02.73 to 2:02.74. It doesn’t get much more exciting than that.

Central Connecticut State’s Christine Rasile won the 100 free in 50.86 ahead of Sarah Menendez and Meredith Ketchmark of Wagner.

Saint Francis University’s Elise Lofgren set a new NEC record with her 2:16.32 victory in the 200 breast. She finished a half-second ahead of Central Connecticut’s Kristina Gulia. There was an exciting battle for third, too; Kelsey Thomas of Wagner and Catherine Rogers of Saint Francis University turned together at the 150 wall. Thomas outsplit Rogers by .17 in the final 50 to get the bronze.

Erin Regan of Mount Saint Mary’s won an exciting 200 fly in which she came back from a full-second deficit at the 150 to claim the victory, 2:01.45 to 2:01.76 over Amanda Lucia of Wagner. Libby Francis of SFU took third.