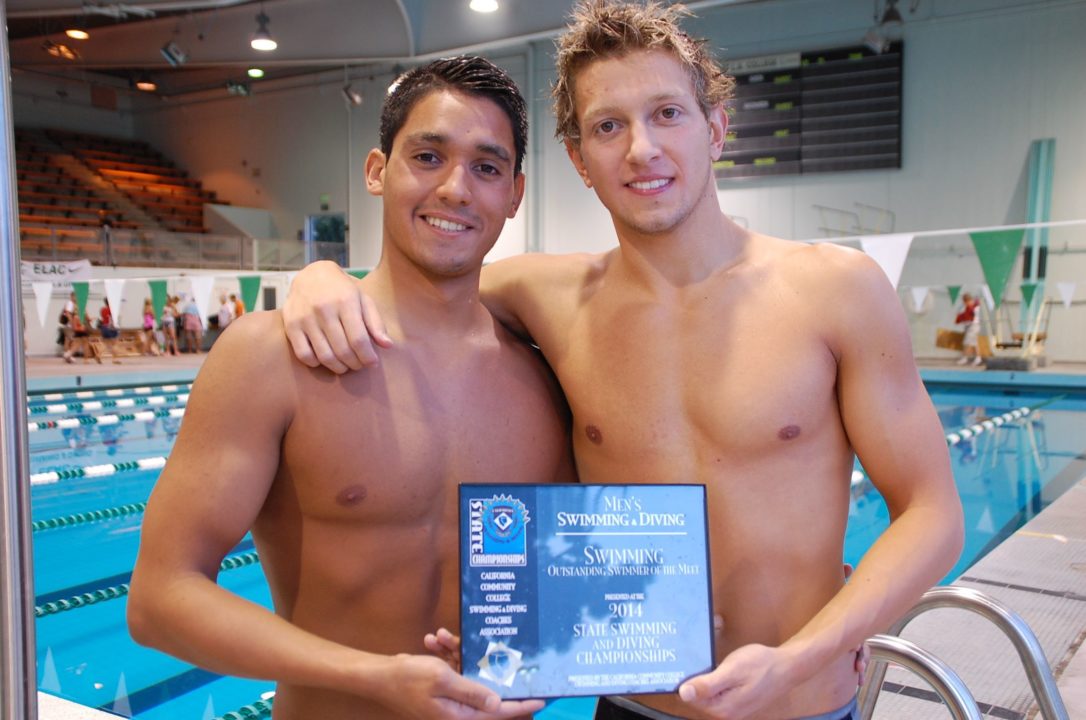 Erlenbach comes to the Mount with Division I and Club experience, with his most recent college coaching experience coming at the University of North Carolina.

Looking back at the California Community College Athletics Association championship meet, which ended Saturday, it seems clear that you can’t call a national junior college champion until the west has finished its season. The California junior colleges aren’t part of the National Junior College Athletic Association (NJCAA) so they do not participate in NJCAA nationals. In addition, it’s a spring sport in California so their championship meet takes place three months later.

The 2014 California state meet showcased three days of fast swimming. (See pre-meet analysis and recaps of Day One and Day Two here.) Held at East Los Angeles College, it gathered 36 women’s teams and 34 men’s from all over the state. In the end the meet record book was rewritten thirteen times; some of those will never again be broken as it was the final time the women’s sprint events (50 back, 50 breast, 50 fly, and 100 IM) would be contested.

Diablo Valley College won a tightly-contested women’s meet with strong performances all around, especially from co-swimmers of the meet Kelsey Leonard and Allison Gargalikis who won three events each. Gargalikis set three state records over the course of the meet. Top-seeded Golden West College won the men’s meet as expected, getting great swims out of all their team members including co-swimmers of the meet Davit Sikharulidze and Gabriel Hernandez.

Shannon Cheung, who had brought Pasadena City College its first-ever women’s state crown when she won the 200 IM, led wire-to-wire in the mile and ended up winning by nearly a 50. LA Valley’s Mor Flaisman took 27 seconds off her seed time to finish behind Cheung. Third place went to Mt SAC’s Kayleigh Davidson. The men’s race had a bit more drama: Evan Augst, the top seed out of Diablo Valley, swam more or less alone through most of the race until Riverside’s James Reyes started closing in on him toward the end. Reyes ran out of pool and finished second, with 16:17.75 to Augst’s 16:16.76. Reyes’s teammate Nathan Diaz was third.

Lauren Vosseler of Golden West, who had won the 50 free, added the 100 crown to her collection with a 51.06 finish. Kellie Thorsness of Orange Coast and Racheal Gruetzmacher of Cuesta were second and third, with 52.15 and 52.17, respectively.

You knew the 100 breast would be fast when Brigitta Games of Golden West broke the meet record in prelims clocking a 1:02.47. In finals, though, it was Diablo Valley’s Gargalikis, with her third meet victory and third meet record, whose name went into the record book. Her 1:00.71 also broke the pool record, and would break the NJCAA national record, too, if the California schools were members. Games finished second in 1:01.75, also under the previous meet record; her teammate Melissa Bergesen took third.