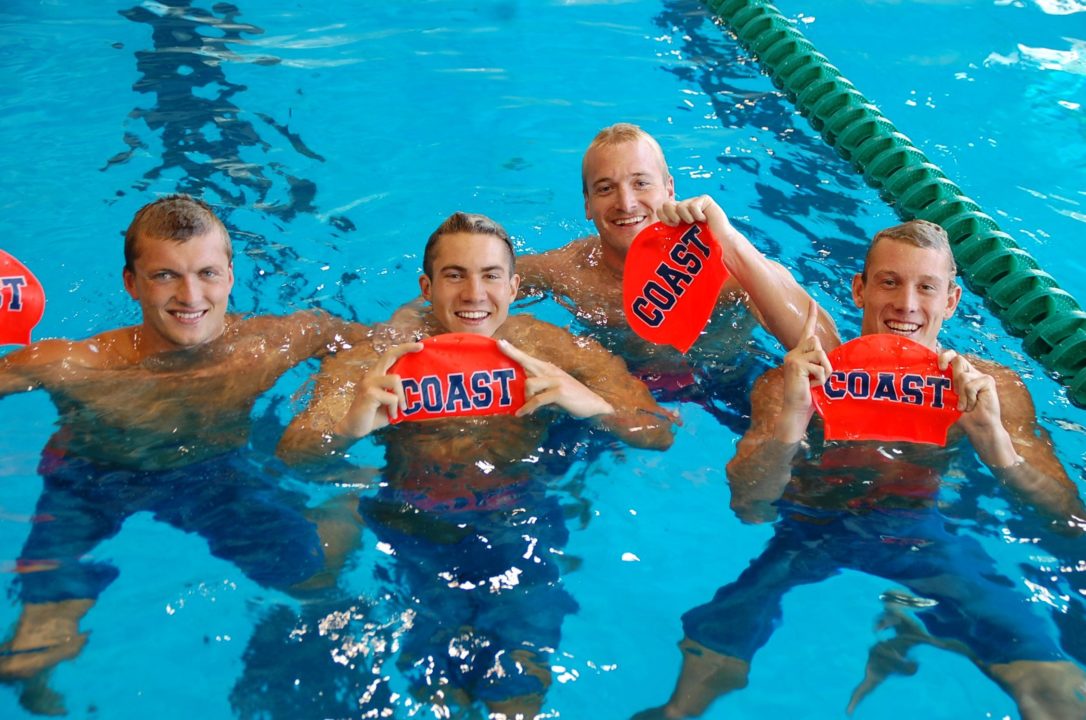 We predicted a very tight women’s meet at the 2014 California Community College championships and from the way Day One played out we are not going to be disappointed. A handful of teams came up ahead of pre-meet expectations thanks to strong swims in prelims, and a few of them also outscored their prelims placings in finals. Meet hosts East Los Angeles College, in particular, had a solid first day showing. Defending champions Golden West picked up enough points to rattle the cage of the three front-runners, and Mt SAC got off to a strong start, nipping at Pasadena City College’s heels and tightening the battle for sixth.

Despite a relay DQ in prelims of the very first event, the Golden West men still dominated Day One of competition. West Valley had a hugely successful day, outscoring both their psych sheet seedings and their prelims placings. Grossmont jumped in the standings based on strong swims from their 200 free and 400 medley relays. Las Positas and Mt SAC also got off to great starts on Thursday.

In the women’s race, Golden West had a stunning come-from-behind win over Orange Coast, to come within 0.19 of the state record. Brigitta Games (24.00), Melissa Bergesen (24.45), Lia Jorgensen (24.35), and Lauren Vosseler (22.69) combined for 1:35.49, a mere .39 ahead of Orange Coast’s Claire Aguilar, Kellie Thorsness, Kaitlyn Finney, and Kessy Hickey. Sierra College was a second back in third.

With Golden West out of the way in the men’s race, having been disqualified in prelims, Orange Coast had no one to pace them. But that didn’t stop them from breaking the state record with their 1:21.75 rout. Sean Richards led off in 20.58; he was followed by Collin Latham (20.37), Travis Hone (20.56), and Kasey Foley (20.24). Second through fifth finished more or less together: West Valley, Ventura, Cuesta, and Diablo Valley.

Diablo Valley’s Kelsey Leonard was the runaway favorite from the outset; the only one with a sub-5:00 seed time, she also turned in the fastest prelim swim. Second-seeded Shannon Cheung of Pasadena City College was in lane 5, the only other swimmer under 5:10 in prelims. The two went out together, trading stroke for stroke for 200 yards. Leonard began descending from that point and Cheung fell off. Meanwhile in lane 3, Mor Flaisman of LA Valley was steadily moving up on Cheung. She pulled even at the 400 and outsplit her by a second in the final 100 to finish second. Leonard won in 4:57.76; Flaisman dropped 5.5 seconds and touched at 5:07.72; Cheung ended third with 5:08.82.

After a thrilling consolation final finish in which Luke Miller of Mt SAC and Chris Dominguez of Golden West battled for an entire 450 and then both hit the wall at 4:38.48, the crowd was primed for a great final race. And it was exciting. Davit Sikharulidze of Golden West turned first at the 100, just a few hundredths ahead of Bakersfield’s Andrew Hargis. Jonathan Diaz of El Camino took over at the 200. By then the top three had established a comfortable distance from the rest of the field. Diaz was up by 1.5 seconds at the 300, and it looked like there might be an upset. While Diaz swam a well-controlled race from wire-to-wire, Hargis had begun to descend by the 250 and Sikharulidze had started even earlier. Sikharulidze pulled even at the 400 and came home in 52.7 for a winning time of 4:30.14 – a 13-second drop from his seed time. Hargis had a 53.0 final 100, touching second in 4:31.35 (-3.3 seconds). Diaz got third with 4:32.35 (-6 seconds).

Golden West’s Bergesen went the exact same time (58.90) as she did finishing third in 2013 but this year it was good enough for the win. Yingfei Zhang of ELAC took second in 1:00.70, three seconds faster than her seed time; Santa Rosa’s Ashley Boyle was third in 1:00.86. The men’s race was hotly contested in the middle four lanes; in the end it was a reversal of their prelims placings, as Gabriel Hernandez of Golden West took first in 1:49.82, with Zach Selfridge from West Valley, Edward Sanchez of Mt SAC, and Santa Rosa’s Andrew Hayes touching second through fourth.

Vosseler of Golden West just missed the state record by .14 but emerged victorious nonetheless as she came in at 23.38. She was followed by Thorsness of Orange Coast (23.77) and Hannah Jarvis of Sierra. John Bing of Santa Rosa got the win on the men’s side with 20.82. Orange Coast’s Foley and Justin Stafford of Las Positas were five-hundredths back, tying for second with 20.87.

In a preview of Saturday’s 100 back contest, Santa Rosa’s Miranda Howell and Pasadena’s Ting Peng put their respective relays way out front after the first exchange. Golden West, and especially Diablo Valley, made up ground with their breaststrokers. In the end, Diablo Valley (Alexa Tchekmarev 1:00.37, Allison Gargalikis 1:01.37, Leonard 55.43, Laura Woods 51.28) wound up first, nearly four seconds under the meet record, with 3:48.45. Second-place Golden West was also the previous meet record in 3:51.06. Santa Rosa finished third in 3:58.56.

Diana Lee of De Anza won the women’s 1-meter diving with a vastly improved score of 215.85. She just edged out Makayla Scott of Shasta (214.55) and Aimee Bruns of Riverside.

Brandon Cox of Sierra had an outstanding day on the 3-meter board, scoring 369.55 for first place and a new meet record. Thomas Dillon of San Diego Mesa took second (257.55); Travis Russo of San Mateo finished third. Saddleback’s Jacob Swansen failed one of his dives but was still able to finish fourth.