2013 Winter Juniors Time Standards Overall Get Faster, But Not By Much 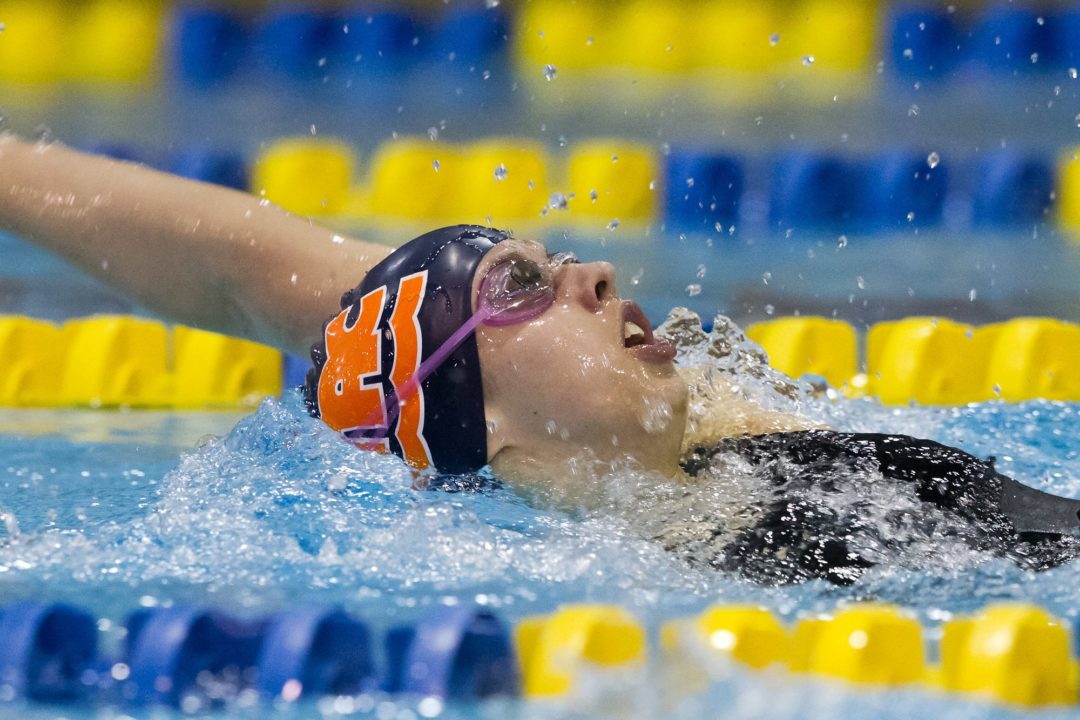 Defending Winter Junior Nationals 200 backstroker Kathleen Baker doesn't have to worry about qualifying for the 2013 meet, but she may be facing fewer competitors after the women's backstroke qualifying standards stiffened significantly. (Photo: Tim BInning/TheSwimPictures.com)

USA Swimming has released, and revised, the time standards for the 2013 Winter Junior National Championships, and while the times got faster (a predictable outcome after the ridiculous speed we’ve seen from the 18 & under ranks in the last 24 months), it wasn’t by much. In fact, there were several times that got slower, and if you ignore the boys’ 1500/1650 freestyle, the times were pretty neutral, on average.

The Winter Junior National Championships will be held in Greensboro, North Carolina, and are swum in yards (though qualification is allowed either in yards or long course meters).

The biggest qualifying time changes came in the men’s 1500 (meter) or 1650 (yard) freestyle. The required qualifying standard over 1500 meters dropped by a full 4 seconds from the 2012 edition of the meet. Improvement in the quality of distance swimmers doesn’t really explain that drop in the standard; in 2012, the 100th ranked 18 & under male 1500 freestyler was only about a second better than the same placement in 2011.

There’s a chance that the huge time drop is simply to shorten the amount of time it takes to run through heats of the longest race on the pool schedule: cutting four seconds off of the 1500 qualifying time knocks off about 15 eligible qualifiers. The same change in the 1650 rankings would cut out about 7 or 8, or a heat’s worth of qualifiers. In reality though, there were only 50 entries in the race at last year’s meet, which is not a ton of heats when swum mid-day.

On average, the qualifying times dropped by about three-tenths of a second; excluding the men’s distance outliers, is getting faster by just under a tenth.

Two other races that saw big changes were the women’s backstrokes. The 100 long course qualifying time got four-tenths faster, and the 200 got half-a-second faster. Those drops were badly needed. Anecdotally, the junior ranks of the women’s backstroke races are getting deeper-and-deeper. It’s no longer that unusual to see 14 year olds going 56’s in their 100 yard backstroke. Looking at numbers, there were 161 girls entries in the 100 back and 143 entries in the 200 back at the 2012 meet. That’s compared to events like the 200 breaststroke, where the qualifying times got slower rather than faster, where last year there were only 78 entries.

The standards for bonus swims seems to have not changed at all, though, so changing the qualifying times won’t have a huge impact on the number of swimmers attending the meet.

Swimmers who qualify for the meet in at least one individual event can swim up to two bonus swims, presuming the rules stay the same as they were for the 2012 meet.