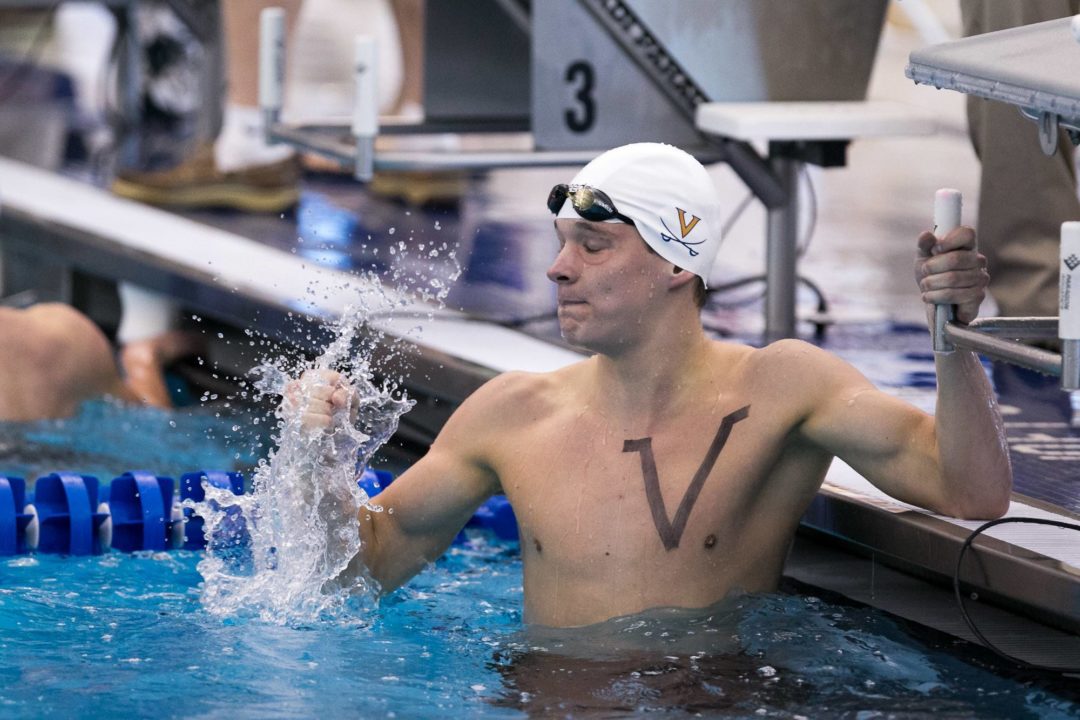 After one of the most eventful and exciting opening nights in the meet’s history on Wednesday (complete with meet records,...

The Bears were hot off the blocks, winning five of the first six races, propelling UNC to a big lead early and they never looked back.

After one of the most eventful and exciting opening nights in the meet’s history on Wednesday (complete with meet records, conference records, and a very unexpected DQ following NC State’s upset of Virginia in the 800 free relay), night two of the Men’s ACC Swimming and Diving Championships had a lot to live up to.  Thursday evening lived up to the challenge.  What we saw tonight was an overall improving level of competition.  This is a surprisingly deep field across the board, and there are more complete/competitive teams than the ACC has seen in a long time.  We’ve seen fast swimming and strong team efforts across the boards, especially from Virginia, Florida State, Virginia Tech, NC State, and North Carolina.

After putting 8 swimmers into A-Finals this morning (including 4 in the 500 free), Virginia looked to separate themselves from the field in the team race tonight.  But the Wahoos weren’t the only ones lighting up the Greensboro Aquatic Center; there were plenty of fast individual performances, highlighted by a trio of Florida State Seminoles.  Let’s recap the events from the evening…

Back in action after redshirting last year to focus on his Olympic aspirations, Duke junior Nick McCrory showed he’s the class of the ACC, and that he’ll be challenging for the top of the podium at NCAA’s.  The Olympic bronze medalist in 10m synchronized diving bettered the field with a score of 433.95.  Virginia Tech senior Logan Shinholser, the defending ACC champion in this event, was close behind, scoring 413.50.  Tom Neubacher from Florida State (388.50) was third.  Overall, Virginia Tech scored big points in this event, putting three in the top 8, propelling them to an early lead in the team standings.

Coming into this meet, Florida State was a big favorite to win this event; all four members of last year’s relay that set an ACC conference record were returning, and they were the top seed coming into tonight by almost 3 full seconds.  The Seminoles came out on top in a time of 1:17.42—thanks to great bookend legs from sprint studs Paul Murray and Mark Weber—but not without a big challenge from NC State (who finished in 1:17.50).

Murray got the ‘Noles clean water right off the bat with an excellent 19.34 leadoff leg (6th fastest in the individual 50 this year), but NC State closed the gap to 0.06 with a blazing 18.95 2nd leg from junior Jonathan Boffa.  The Seminoles and the Wolfpack had essentially identical 3rd and 4th legs (19.63-18.99 from David Sanders and Mark Weber for FSU, 19.59-19.05 from Matthew Thomas and David Williams for NCSU), with Weber getting to the wall first.  Both teams were under the NCAA ‘A’ standard of 1:18.36.

Virginia Tech, with virtually identical splits from its 2-4 swimmers, also snuck under the ‘A’ cut for 3rd with a time of 1:18.06.  Georgia Tech, with a quick 19.19 anchor leg from Nico van Duijn, was 4th.  Notably, UNC and Virginia finished 5th and 6th, respectively.

In what has become common practice for Virginia’s teams at ACCs over the years, the Wahoos scored 79 points in one of their signature events to jump into the lead in the overall team standings.

In arguably the race of the night, a variety of contrasting race strategies led to several lead changes, with every swimmer in the heat pacing, charging, and fading at different points of the race.  The outside lanes went out fast, led by North Carolina junior/Mecklenburg Aquatic Club product JT Stilley in lane 2 and Virginia Tech’s Michael Szuba in lane 8.  Szuba had a great 3rd 100 to take the lead, only to watch Bradley Phillips of UVA shoot out of a cannon over the next 100 yards.  Phillips split back-to-back 50.2’s over the final two 100’s to build a lead and held off a late charge from teammate (and top seed) Jon Daniec for the win.

Phillips finished in 4:17.61, good for T-20th best in the country this year (including Big 12’s and Big 10’s), with Daniec just behind in 4:17.76 (22nd in the country).  Until today, anything under 4:18 would be an all-but-guarantee to make NCAA’s (especially given the new qualification procedures).  However, with two new Big 12 swimmers and seven Big Ten swimmers jumping under 4:18 tonight, Daniec and Phillips can’t breathe easy just yet.  They will have to await results from PAC-12’s, Ivies, and a few other small conferences/last chance meets before they’ll know for sure.

Although Greg Mahon of Virginia Tech led at the halfway point of this race, first year Florida State swimmer Pavel Sankovich closed with a great final two legs to win convincingly in 1:43.22, an NCAA ‘A’ qualifying time.  The two-time Olympian from Belarus kept the race close in the front half, and then posted the back half in the field (30.20-24.91) to pull away.  His time tonight is the 5th fastest in the country this year.

Seasoned veteran Tom Luchsinger finished with a sub-25 second freestyle leg to touch ahead of Mahon in 1:45.08 (Mahon’s time was 1:45.66).  Expect the UNC senior to be a player in both IM events and the 200 fly in a couple weeks; Luchsinger had a lights-out summer season, knocking seconds off his best time in multiple events.

Notably, freshman Luke Papendick of UVA won the B-Final in a lifetime best time of 1:46.37.

Florida State finished off the night on a high note, with Mark Weber (19.44) and Paul Murray (19.59) going 1-2 in the splash-and-dash to move the Seminoles back into the title battle.  Murray, who was a bit faster in prelims (19.34, the same time as his relay lead off from tonight), holds the 6th fastest time in the country this year, while Weber is 8th.

Huge points in the 500 free and 200 IM pushed UVA to the top of the leaderboard, but there are three teams below them within striking distance should the Wahoos lose momentum.  It’ll be an uphill battle for these squads, however; Virginia came to play this week, moving up big time from their seeds this morning, and looking poised to claim their 5th straight ACC title.