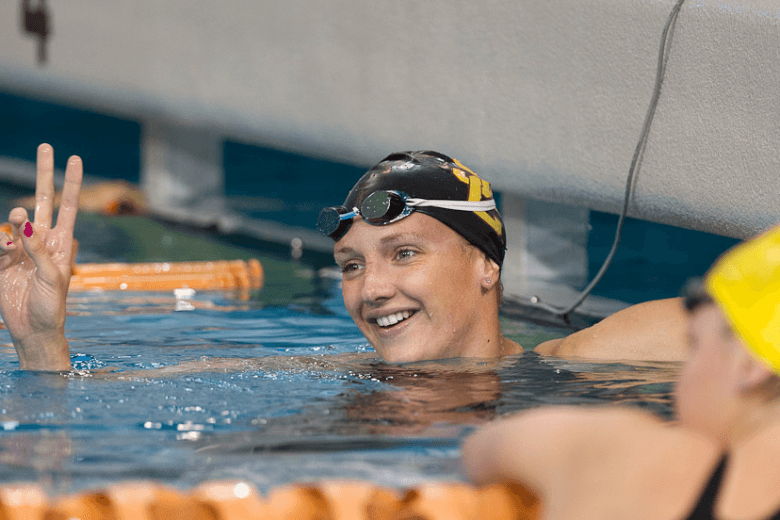 It's time to check out the favorites for day 2 at NCAA's, including the "race of the century" in the women's 400 IM.

Rolling into day 2 of the NCAA Championships, and the highlight race is the women’s 400 IM, with a head-to-head-to-head (to head-to-head) battle unlike we’ve ever seen before at a college meet.

There’s also a very good shot that at least one NCAA record will go down – in the women’s 100 breaststroke. Both Cal and Georgia have races on this day where they could pull big point swings, so call this the rubber-day of the meet.

This is going to be an exhilarating relay. There are about 7 different squads with a legitimate chance at the title – including some more surprising teams like SMU. Cal’s already made the scratches they needed to in order to pop Caitlin Leverenz onto this relay. Texas A&M should have the lead headed into the final freestyle leg, assuming Breeja Larson can hold off Leverenz in a 50 (probably). Erica Dittmer is good enough on the 50 for a decent anchor, but Liv Jensen(Cal) and Anna Vanderpool-Wallace (Auburn) are two of the best ever. You might not pick it out for the names, but Tennessee has been awesome this year, especially with transfer Caroline Simmons providing a stronger-than-expected closing kick. Arizona has three great speedsters (Denninghoff, Peacock, and Geer), and the right breaststroker in sprinter Ellyn Baumgardner. This relay is going to be back-and-forth, so keep your eyes glued until the final touch. Drama guaranteed.

Arizona State knows they have three great legs to start off. Shannon Landgrebe, their junior anchor, is a great swimmer – but is great in the 200 moreso than the 50. If she can roll into a 22-low (it’s within reach) the Sun Devils are contenders for medals too.

Coming into this season, only two women in history (at any level) had been under four minutes, and one of them was Katinka Hosszu. Already this season, two others (Leverenz and Beisel) have done it, and there are two that are within reach (Allysa Vavra and Maya DiRado). Beisel is the defending World Champion. Hosszu took that title before her in 2009. Leverenz is breaking out on the international scene. DiRado is the youngest (she’s a sophomore, but is only freshman-in-age). Vavra has improved the most this year (already dropped three seconds). They all have a reason to win. We’ll break this race down more in-depth over the weekend, but suffice it to say, it’s going to be awesome. Short answer – Hosszu gets the nod on experience.

With so many of the top swimmers returning, it’s hard to pick a good darkhorse. Stanford’s Andie Taylor, however, has a great front-half and a decent breaststroke. Last year, her taper was gone and she struggled to finish the race. The Stanford women this year, however, seem to be timing things better – Taylor should be better than 4:05, though that doesn’t mean as much this year as it usually does.

There’s lots of open spots to be had thanks to the top four swimmers from last year all graduating, however it’s going to take a much faster time to score big points this season than it did last. The trick there is that swimmers who drop points often do very well – a huge majority of finalists in this race last season added.  Jenny Connolly fancies herself a backstroker at the international level, but it will be hard for her to give up going after this race full-bore as the top-seed, because she will be wiped by the time she gets to her third swim of the session in the 100 back.

Two teams have a chance at multiple swimmers in this top 5 – Auburn (V-W and Olivia Scott), and Tennessee (Connolly and Kelsey Floyd). Megan Lafferty has been right about her best time already this year, but I think that has more to do with having ramped-up her confidence as both a returning-scorer in this race and as one of the leaders in the Terrapins’ bid to save their program.

Yumi So out of USC fits squarely into that mold of “swimmers who drop time” in this race. She’s been all over the place event-wise in her two years at USC, but she really is coming into her own as a 100 fly/100 back duettist.  She was able to make a significant drop at NCAA’s last year. With such slim margins from 1st to 16th, she’s got some mustard in this race.

If Georgia wants to make a push for the National Championship (as they well should), this race is where they need to make their stand. Getting two swimmers in the top three is a must, and they certainly can’t let either of their top swimmers Romano or Vreedland be taken over by the Cal Bears seeded 4th and 5th. The Bulldogs should score three, Cal could score as many as four (with three seeming likely). if Georgia wants to win the team battle, they need to outscore Cal in this race. I really like Karlee Bispo, but Shannon Vreeland has too much upside to be held off from a Bulldog 1-2 finish.

There’s a lot of huge names in this race; Larson, Carlson, and Wanland are the big studs. Spencer is great, but her best chances are really in the 200. Emily Fogle has torn up the Purdue record books, and Emily McClellan is this year’s Ashley Danner with the 4th-seed on a huge 59.25. Ashley Danner is still around too, and as a senior seems better-positioned than ever to make a move in this race. In a great sign of parity, not a single team has more than 1 swimmer seeded in the top 20. Larson broke the NCAA record without shaving at Big 12’s. Woof, that’s scary. She’ll be chasing the American mark in this race.

I really like Arizona State’s Rebecca Ejdervik as well, but I’m worried that she’ll be focused more on Olympic qualifying for her native Sweden. Letting it ride on Northwestern’s Jenny Wilson. In my mid-season awards, I pegged her to have a breakout second half, and she didn’t disappoint. Now she’ll have to prove that she can do it again.

Cal wins backstroke titles. It’s what they do best, and why they are so successful at recruiting backstrokers. Cindy Tran and her amazing underwaters have to be the favorite to repeat here. This race is where Cal will take a big shot  as a result of last year’s runner-up Deborah Roth not even making the meet. That means Tran is the only swimmer out of last year’s top 5 to return in this race. One top-5 swimmer, however, returns after a redshirt season: Arizona’s Lauren Smart (formerly of Virginia). Remember that smart wasn’t there in Austin, so she’s an instant upgrade for the Wildcats. There’s a couple of swimmers (Megan Romano and Jenny Connolly) who are going to be swimming this race on (at least) triple-swim sessions, so we’ll learn a lot about mental fortitude here. Last year, Connolly handled it better, but arguably both women are entirely different swimmers this season.

Given that Tran’s two biggest contenders are going to be swimming 2nd-or-3rd races, hard to see either challenging her as she dips down to 50-low. With freshmen taking top two spots at last year’s meet, it was easy to overlook A&M’s Paige Miller, who was also an A-finalist (on her 3rd swim of the session). If the coaches let her scratch the 100 fly (which I think they should), she could have a very special swim as well. Like, top-three special.

Georgia and Cal will both be counting on youth in this relay. It should be a much tighter battle than last year’s Georgia three-second victory, especially with Liv Jensen having found a true 200, but Georgia again seems too deep to be caught in this race. Arizona didn’t swim this race at their mid-season taper, but still managed to take the 7th seed in this race. They’re a well-built quartet – but without a big hammer to keep seed with the top two.

Indiana’s stocked with 200 freestylers, and Florida replaced their one loss (Shara Stafford) with a solid freshman in Natasha Fung. Texas returns three of four swimmers on this relay from their 4th-place finish last year (they only lost the slowest leg) and can cut about 2 seconds off of that time on a better Bispo performance alone. one of the running themes of this meet is how well the Texas women bounce back from Big 12’s. If they do, they’re 4th. If they don’t….