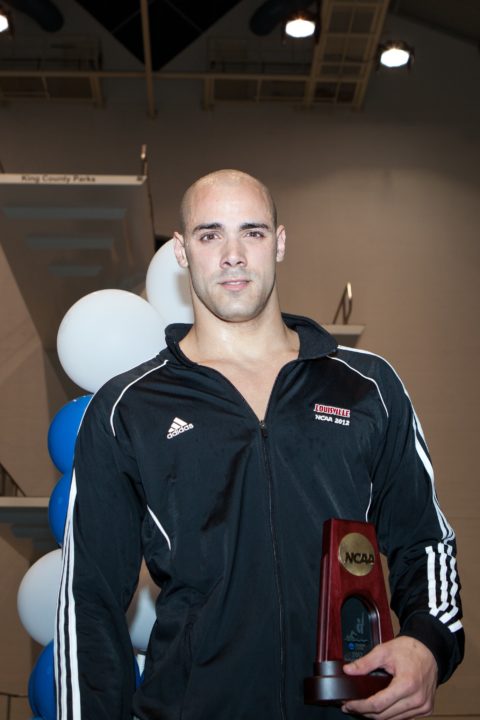 Joao de Lucca, with an Olympic experience under his belt, will be looking to improve upon his 3rd-place finish from last season in the 200 free. (Photo Courtesy: ©Tim Binning/TheSwimPictures.com)

Coming off of a hugely successful season that earned them the title of Break-Out Program of the Year, the Louisville Men have a lot of momentum going into this season. Three of their swimmers competed in London: Carlos Almeida and Pedro Oliveira of Portugal and Joao De Lucca of Brazil. Only De Lucca will return to compete for the Cardinals this fall.

2011-2012 Recap:  Led by 2012 Olympian and NCAA Champion Carlos Almeida, the Louisville men capped last season with a ninth place finish at NCAAs. Almeida won the 200 breast in 1:51.88, and was .07 away from capturing both breaststroke titles, taking second in the 100 to Arizona’s Kevin Cordes. He also helped lead both Louisville medley relays to 7th place finishes at NCAAs.

Missing Medleys: Both the medley and freestyle relays will have some big holes with the loss of this year’s senior class. Not only will the medleys face a breaststroke deficit with Almeida gone, but backstroker Brendon Andrews was not only a key contributor on both medleys, but also a member of the 200 and 400 freestyle relays at NCAAs this year. Three of the four members of the strong medley relays are now gone, so it will be up to rising junior Joao De Lucca to lead a new cast.

Free Birds: While the medleys have quite a few gaps, the freestyle relays will feature a strong cast of returners this year. Brendon Andrews was the only senior on any of the freestyle relays at NCAAs, and every member on the 800 free relay will return for at least one more year. Rounding out an already strong group of freestyles will be distance star Bryan Draganosky of Germantown Academy,  who has the potential to make an impact at the NCAA level his freshman year.

Filling the Fins: Though their relays this year were evidence that the Louisville men have quite a bit of depth, there’s no denying that having an NCAA champion has a way of propelling a team up the scoreboard even if the depth isn’t there. The big question going into this season will be whether Louisville will be able to compensate for the loss of a superstar with increased depth. Lucky for them, one superstar remains to lead this charge: freestyler Joao De Lucca was a member of all five relays at NCAAs and placed 4th and 3rd in the 100 and 200, respectively. His classmate, Kameron Chastain, whose a 53/1:56 breaststroker will step up for the relays next year. He’ll also look to improve upon his 23rd and 27th place individual finishes at NCAAs this year. Another swimmer to watch is rising sophomore sprinter Carlyle Blondell. Blondell had a breakout freshman season, showing strong performances in the 50 and the 100 and acting as a key relay participant at both conferences and NCAAs.

Sprint Free: Despite the loss of Brendon Andrews, several swimmers are poised to take over an already powerful team of sprinters. At 2012 Big East Championships, six Louisville swimmers qualified for the 50 free A final and Andrews is the only one not returning. De Lucca, who took second to Andrews at conferences, can swim anything from a 50 to a 200 and will continue to be a significant asset to relays. IMers Burtch and Lloyd provide strength in the 200 as well, and both Blondell and Samuel Hoekstra have shown promise in the 100.

Distance Free: The old and the new should dominate this event for the cardinals when incomer Draganosky teams with rising senior Michael Pryor to try and put together a strong distance corps. The loss of Riley Martin will hurt them, but there’s certainly room for improvement here as well. Louisville failed to score in either the 500 or the mile at 2012 NCAAs, but did better at the conference level.  Pryor (4:24.6 at the Big East Championships) will look to finish off a successful collegiate career with some time drops in the 500 free while Draganosky (4:28.4/15:18.6) of distance powerhouse Germantown Academy could have the potential to score nationally.

I.M.: Senior Alex Burtch comes off of a successful year but will be hungry for more after performances at 2012 NCAAs that were slightly slower than his conference times. Burtch will lead an IM group that includes rising junior Albert Lloyd and fellow senior Michael Haefner in the 200 I.M. In the 400 IM, they’re slightly weaker but Michael Pryor’s strong in that event and newbie Nolan Tesone shows promise as well.

“Flyty”: The Louisville men will be weakest in the fly events this year after graduating both their best sprint and best 200 butterflyers. Juan Lopez, who has bests of 48.7 and 1:48.0 in the 100 and 200, has the potential to step up in both events, and the position is wide open for other returners and incoming freshmen to do the same.

Breaststroke: Despite the loss of Almeida, the breaststroke events still have the potential to be one of Louisville’s best this year, as they tend to be on both the men’s and women’s side. Not only is Kameron Chastain in position to take over as leader of breaststroke group, but rising sophomore Addison Bray will be close on his heels and hungry for more after a strong freshman season.

Backstroke: The cardinals may well feel the difference between last season and this season most acutely in the backstroke events with the loss of Brendon Andrews, because there’s no one that really stands out as a replacement. The team will also be smarting from the loss of Pedro Oliveira who was a big point-scorer in the 200. Butterflyer Lopez will look to step in there, but this is another event where the team will be looking to incoming freshmen to have some big time drops and make an impact. The leadoff leg on the Louisville medleys will be up for grabs.

2012-2013 Outlook: Losing two superstars–especially key relay contributors like Andrews and Almeida–is not easy for a team to bounce back from. Filling the stroke gaps in the medley relay won’t be easy to accomplish all in a year. But there’s a lot to be said for a team that’s riding that kind of momentum, and the younger strength in some of the freestyle combined with a solid recruiting class offers hope for next year. Without the top end talent they may have trouble repeating the top 10 NCAA finish from this year, but they definitely still have the potential to be a top 15 team.

How old is Joao de Lucca? He looks like he’s about 35