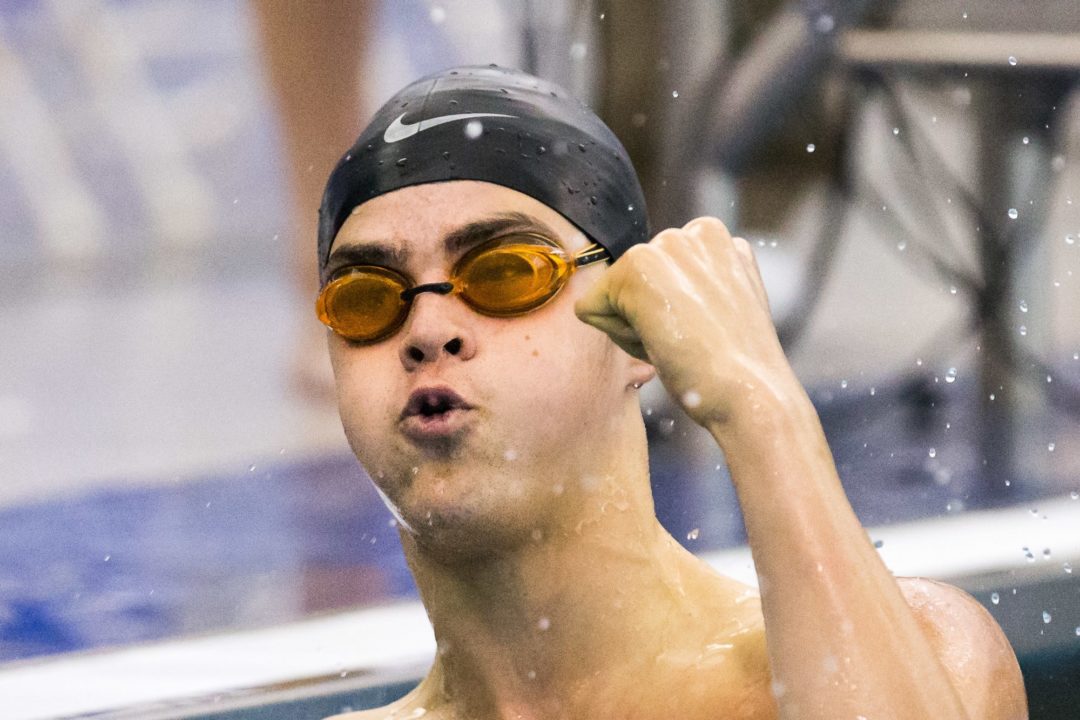 Michael Andrew is one of 7 swimmers of whom Mutual of Omaha announced a sponsorship on Tuesday. Archive photo via Tim Binning/TheSwimPictures.com

14-year old professional swimmer Michael Andrew has signed his second major endorsement deal in June of 2013, inking a contract for sponsorship with Mutual of Omaha, a mutual insurance and financial services company based in Omaha, Nebraska.

Mutual of Omaha has been a huge player in swimming sponsorships, with the title endorsements behind meets (Duel in the Pool), clinic tours (Josh Davis’ Breakout clinics), USA Swimming as a whole organization, and American swimmers. Andrew is one of 7 swimmers of whom Mutual of Omaha announced sponsorships, though he’s by far the youngest of those 7.

Andrew joins a list of sponsored athletes that includes:

His first deal was with the supplement company P2 Life, which is the signing that officially forfeited his amateurism and his eligibility for high school and NCAA competition. Now he adds Mutual of Omaha as his second big sponsorship agreement.

Andrew is one of 7 athletes who were announced by Mutual of Omaha as being added to their lineup of swimmers on Tuesday, though the rest are considerably older. Also announced were:

I am glad for Allison Schmitt signing a deal

Here is the marketing hook The guy does not even drive yet so They may do a safe driving/ fast swimming sort of campaign. as he goes through drivers ED, best of luck

This is a great deal for both parties. Michael gets to be a breakout swim clinic athlete which will get him additional exposure for future potential endorsement deals. MofO gets in on the ground floor with a potential star in this sport. I know in the Midwest any clinic with Michael will be well attended, perhaps only Lochte would have better attendance at a swim clinic. It may not be “right” by your standards, but age groupers do idolize him much more so than all but a very few of the most accomplished swimmers.

This kid is breaking all the “rules” as a swimmer. He forgoes the “regular route” other swimmers of his ability have gone.

His dad better steer that ship wisely and let MA taste a bit of freedom or something. If his grip is too tight, it could have the opposite affect.

The name of the game for him and his dad is go fast get money. Lol, the american dream!

Look, plenty of companies sponsor young talent (think the entertainment industry) and back them for cheap in hopes of hitting a home run. This is same, just in swimming.

Should people care if he is deserviing? I dont think so, him and his dad are making moves and think… Read more »

Really baffled about all the furor over MA’s signing a contract with a major supporter of swimming. It is a business decision, pure and simple; MA generates discussion and with that, visibility.

Questioning the motives, income, religion, etc., of MA and/or his parents is, in my humble opinion, a waste of energy.

Until MA proves otherwise, celebrate his successes, both in and out of the water.

While I agree with some of the arguments raised about seemingly more “deserving” swimmers getting these deals, SwimmingCrazy hit the nail on the head in that MARKETABILITY is the key here.

EVERY MA article draws considerable buzz here on Swim Swam from supporters, detractors, and skeptics alike. As the axiom goes, there’s no such thing as bad publicity, and MA regularly draws commentary that rivals (or in some cases, far outpaces) many of the BIGGEST stars in the sport. Regardless of one’s personal feelings about the kid and the deal; from a business standpoint, MofO couldn’t have picked a better billboard.

This deal is a total win-win for them. Much like a late round draft pick, if MA… Read more »

Totally agree with all of your points.

Especially if the reports are true that MA is very popular among other age groupers.

Based on actual results at a much higher level than Age Group Swimming. We have NCAA champions, Olympic and World Championship medalists, grown men and women that have actually accomplished something other than being a large 14 year old with NAG records and nothing more yet. As I stated previously, the young man is talented, but he needs to prove himself over time and at the senior level. Based on USA swimmings criteria. Andrew’s does not even qualify for stippens!

Their is no sence of entitlement on the part of most post grad swimmers, but the fact is they do deserve consideration simply based on what they have accomplished in the real world. And as the parent of one… Read more »

I agree with you. No one said that the process is fair. Mutual of Omaha is not interested so much in upholding the sport as it as in earning money. Let’s not be deceived about that. The national stage is where swimmers prove their credits, competing against the top swimmers of other countries. That’s where athletes define their contribution to the sport. I don’t view Michael in that category yet–not at all. Once he stops growing, and reaches the point where his times don’t improve as quickly as they do now, I would like to see how he handles that adversity.

That’s the point, MoO’s priority is making money. They can do this through sponsoring the fastest swimmers, or through sponsoring the most recognizable swimmers. Usually those terms are mutually inclusive so there’s no issue when Tom Shields or Natalie Coughlin picks up a deal, but here they found themselves at a point where they had to choose. You might not understand the decision, but I guarantee you there were a dozen people up the chain who calculated that this was a good move.

He’s young, but almost every swimmer in the country has heard about “that really fast pro kid from Kansas” and 95% of those kids know that his name is Michael Andrew. His name means a lot… Read more »