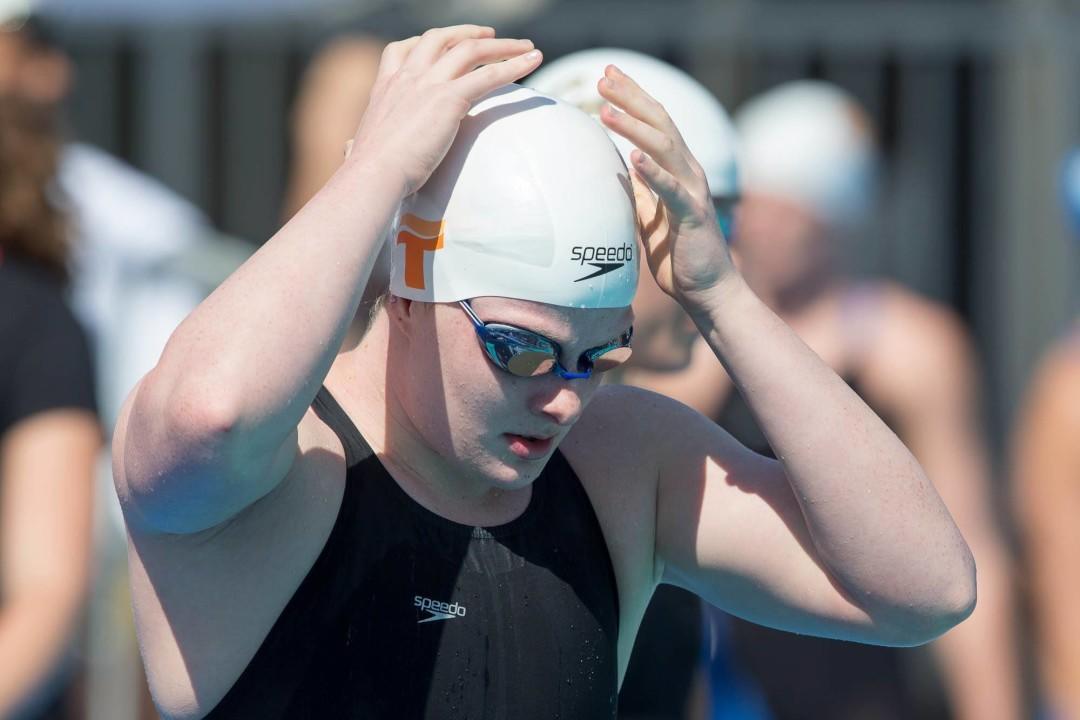 Tennessee's Faith Johnson won the 50 freestyle in 22.22, the 3rd fastest time in the NCAA this year. Archive photo via Tim Binning/TheSwimPictures.com

The first night of finals at the 2015 Tennessee Invite got underway tonight. After an interesting first session swum long course metres, finals was back to the usual short course yards. There were some very fast swims across the board.

Note: the entire heat of the women’s 200 free relay swam in the wrong lanes. The Tennessee ‘A’ relay won the race, and the Missouri ‘A’ relay placed 2nd. Current live results are not accurate.

After an impressive morning swim of 3:53.65 in the long course 400 freestyle, Evan Pinion of Tennessee blasted a 4:14.97 tonight to take the win. He also broke the school record and posted the fastest time in the NCAA this season in the process. He is certainly someone to keep an eye out for this season. His teammate Sam McHugh was 2nd in 4:19.28, and Michael Szuba of Virginia Tech was 3rd in 4:20.57.

Lauren Driscoll of Tennessee pulled out a big swim winning the women’s 200 IM in 1:57.54, just taking out Katharine Ross (1:57.72) of Mizzou. Both swimmers swam personal bests, and they became the 2nd and 3rd fastest in the NCAA this season. Amanda Carner of Tennessee, Nadine Laemmler of Mizzou and Abby Duncan also of Mizzou rounded out the top 5.

Michael Chadwick continued his fantastic start to the meet, winning the 50 free in a swift 19.17. The time gives him the top time in the NCAA, an NCAA A-cut, and a new school record to boot. His teammate Matthew Margritier was the only other man under 20 seconds in the A-final, finishing 2nd in 19.87. Tennessee’s Gustav Aberg Lejdstrom was 3rd in 20.05, and Mizzou’s Christian Aragona pulled off a 19.99 in the B-final.

The University of Missouri women went 1-2 in the 400 medley relay, with both the A and B teams beat out 3rd place Virginia Tech handily. Mizzou’s A team went 3:33.11, good for an NCAA A-cut and the 2nd fastest time in the NCAA this season. The team consisted of Hannah Stevens, Abby Duncan, Erin Metzger-Seymour and Anna Patterson who all posted fast legs. Their B team was close behind in 3:34.55, with a particularly fast lead-off leg from Nadine Laemmler in 52.54. Virginia Tech was 3:38.49 for 3rd, and Tennessee’s A team was nailed with a disqualification.

After an incredible first finals session where we saw multiple school records and numerous top NCAA times being posted, the meet will continue Saturday morning at 10 AM Eastern, with another LCM prelims session.

41.7 for Chadwick anchor. Did I add that correctly?

He went 48 KDM this summer, so 41 on a relay makes sense. He’s a player for making the relay this summer.

No way the “B” Mizzou women’s 200 yard freestyle relay posted that time.

It has to be a mistake in reporting.

SayWhaaat – that is how the relay is labeled in the official results, and given that their top sprinter Anna Patterson was on the ‘A’ relay, it appears authentic. We’ll check now to see if the relays swam in the wrong lanes.

Turns out you’re correct – that entire heat was in the wrong lanes. Tennessee ‘A’ won, Missouri ‘A’ was 2nd.

Does anybody know why the Tennessee girls that placed first through fourth in the 50 ended up 5th together in the 200 free relay?