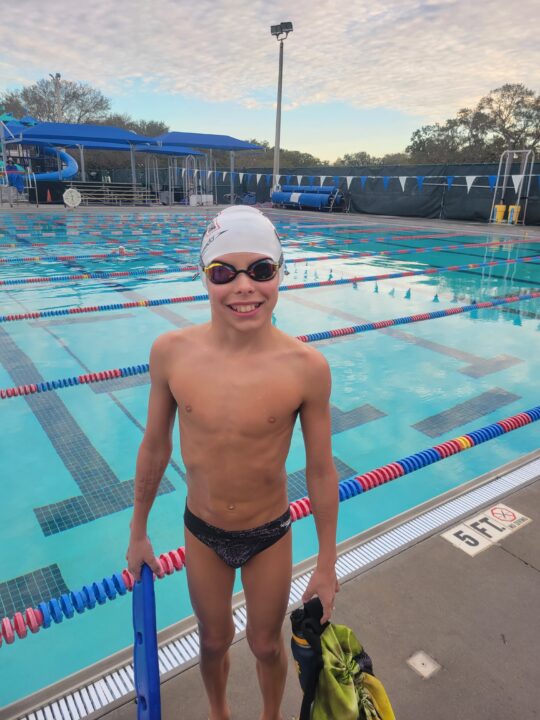 Sawyer Hansen has done an hour-long swim every year since 2017 to raise money for cancer research, and surpassing the $50,000 barrier in 2022. Current photo via Fred Lewis

In the Fall of 2016, Sawyer Hansen was watching a Michigan Football game when he saw a story on Jim Harbaugh and his team volunteering at C.S. Mott Children’s Hospital in Ann Arbor.

Sawyer asked his dad, “how do kids my age get cancer?” Dad explained and Sawyer continued to ask, “what can I do to help?”

In January 2017, part of a school “cares” project Sawyer was inspired and set out to make an impact on our world by raising money for cancer research.

At just five years old, the inaugural “Sawyer Swims for St. Jude” hour swim was completed. The swim continues annually, with the ongoing goal to surpass the previous year’s yardage and funds raised.

Sawyer has big dreams of making a difference in the lives of children fighting cancer and strives to raise $100,000 before he graduates high school. Sawyer is quick to point out, the success has been a “TEAM” approach, supported by many generous donors.

Fun Fact: To prepare for this swim, Sawyer swam a few practices with Olympic Champion Bobby Finke while he was home training with the club over the Holiday break. To be clear, Bobby went first in the lane and Sawyer went 5 seconds behind.

This is a nice feel-good story, and this kid and the people who supported him deserve praise. Kudos, keep up the good work.

But it’s also a sad story because it’s a reminder that, although we live in the wealthiest country in the world, hospitals have to rely on fundraising 10-year-olds.

Congratulations. I was lucky to have watched you swim that day. Amazing swim!!!

This should be used as a model by USA Swimming of how clubs across the country can help their communities while raising awareness of the many great kids and coaches who are part of our sport.

I am now an official member of the Sawyer Hansen Fan Club.

Sawyer Hansen. Champion. No matter what.

Sawyer is a special young man. I’ve been a supporter since his first swim. Year two, he swam with a fever because re refused to let the kids at St Jude’s down. His dedication to his goals is very inspiring.

This is awesome. We all are fans of swimming as a sport, but more often than not swimming has few implications / small impact outside of the pool. Finding a way to bridge something he enjoys and the real world is fantastic.