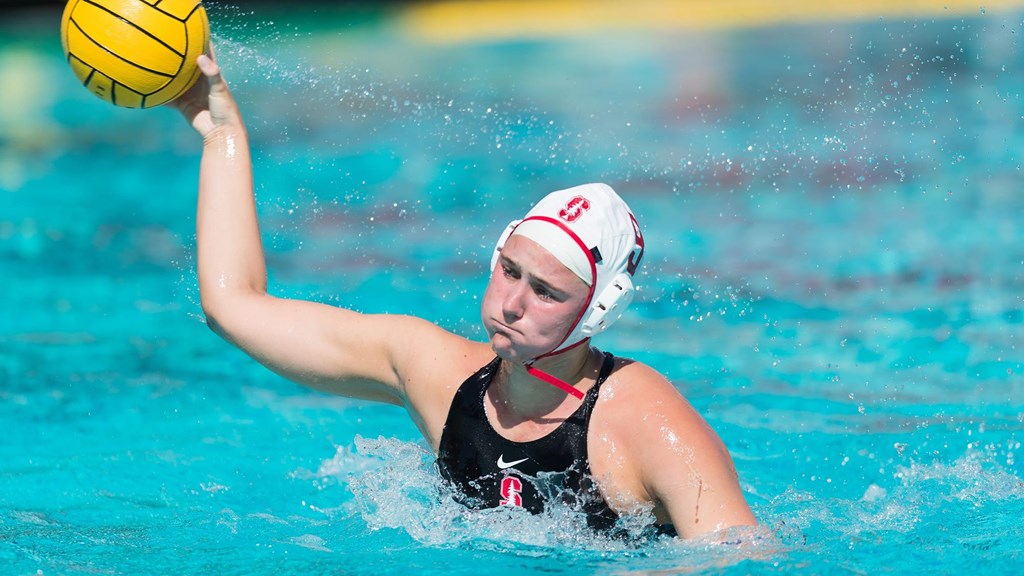 Aria Fischer scored a career-high five goals and No. 1 Stanford clinched the top seed in the upcoming MPSF Championship with a 13-12 victory at No. 4 Cal on Saturday afternoon. Current photo via David Bernal/ISIPhotos.com/Stanford Athletics

BERKELEY, Calif. – Aria Fischer scored a career-high five goals and No. 1 Stanford clinched the top seed in the upcoming MPSF Championship with a 13-12 victory at No. 4 Cal on Saturday afternoon.

The Cardinal is at home the rest of the way. It plays UC Davis and San Jose State at Avery Aquatic Center next Friday and Saturday before hosting both the conference tournament (April 26-28) and the NCAA Championship (May 10-12). Tickets are on sale for both postseason events by clicking here. Admission is free to Stanford’s regular-season home games.

Stanford went up by as many as seven, 10-3, late in the first half when Makenzie Fischer scored her second of three with 30 seconds to go before the break. Emma Wright answered for Cal on the next possession and the Cardinal led 10-4 at halftime.

The Cardinal was still up five after three quarters, 12-7, but slowly saw its lead dwindle to one late in the game. Cal cut the deficit to three, 12-9, less than two minutes into the fourth, before Aria Fischer broke through for Stanford’s final score with 3:05 remaining.

Claire Sonne (2:48) and Emma Wright (2:07) made it 13-11 and then the Golden Bears called timeout after taking over with 52 seconds to go. Following a Stanford exclusion at 39 seconds, Brigit Mulder converted on the power play to inch Cal within one.

Stanford was able to hold on for the victory, its third consecutive one-goal win, and fourth in a row over Cal.

Emalia Eichelberger made a career-high 12 saves in the cage for the Cardinal.

BERKELEY – The No. 4 Cal women’s water polo team blitzed No. 1 Stanford with a spirited second-half comeback but came up just short in a 13-12 loss Saturday at Spieker Aquatics Complex.

The Bears (13-6, 1-3 MPSF) trailed 10-3 with 30 seconds left in the first half but a goal by All-American Emma Wright 15 seconds later seemed to give Cal a jolt after the intermission. The Bears scored the first two goals of the third quarter then outscored the Cardinal 5-1 in the fourth.

Sophomore Brigit Mulder scored the last of her three goals on the power play with 37 seconds remaining to cut the deficit to one, but the Cardinal was able to run out most of the rest of the clock and Cal couldn’t get off a final shot.

Wright, the second-leading scorer in the MPSF, also finished with three goals to give her a team-high 44 on the season. Sophomore Elli Protopapas added two goals, including one on a penalty shot.

The 12 goals are the most Stanford has allowed in a game this season.

All-American goalie Madison Tagg made eight saves for the Bears.

Cal is back in its home pool Sunday to host Indiana at 4 p.m.