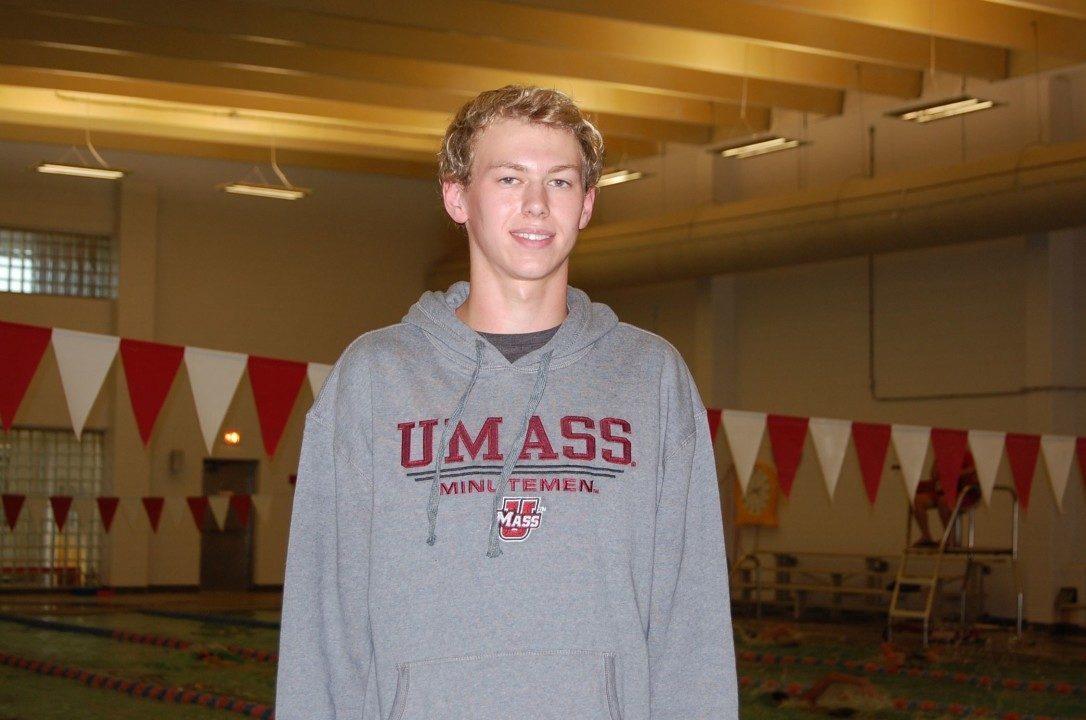 Ryan Pedrick of YMCA of Burlington and Camden Counties has made a verbal commitment to University of Massachusetts. Current photo via YBCC Phoenix

The following is a press release from YMCA of Burlington and Camden Counties’s Phoenix Swim Team.

YMCA of Burlington and Camden Counties’ Phoenix Swim Team, has announced freestyler Ryan Pedrick of Delran as its first swimmer to commit to a college team. Pedrick has verbally committed to the University of Massachusetts for next fall.

Pedrick started swimming at age 8 at Riverdel Swim Club in Delran and currently swims at Tenby Chase. He holds long course records at the Y for 50 free at 24.29 and 100 free at 53.98, and the 400 free relay.

“Ryan has just scratched the surface of what he is capable of doing in the pool,” said Chris Brookover, Swim Coach of the YBCC Phoenix and Director of Competitive Swimming at the YMCA of Burlington and Camden Counties. “Going Division I is a great choice for Ryan as he can reach his potential and be an asset to U Mass next year. He is our program’s first commitment and we are very proud of him.”

“Last year, when I reached out to U Mass, I wasn’t as fast in the water as I am now,” stated Pedrick. “They gave me an offer based on my current times, and Coach Russ really believes in my potential. Since I started working with the Y and the Phoenix team under Coach Brookover, my times dropped remarkably and U Mass was really impressed. I’m excited to start working with U Mass Coach Russ Yarworth.”

Pedrick has been swimming on Delran High School’s Varsity team for four years. After his freshman year, Pedrick sought help from Dean Hutchinson, a USA Swim Coach and physical therapist at Strive Physical Therapy to help correct mechanical flaws in his stroke. Pedrick credits Hutchinson with helping him swim healthy and shape him into the swimmer he is today.

After fixing his stroke technique with Hutchinson and beginning training with the Y’s Phoenix team, Pedrick was able to make his dream of swimming in college a reality.

Pedrick resides in Delran with his parents and brother, and will join University of Massachusetts class of 2020 in the fall.

For more information or to register for the Y’s competitive swimming program, contact Chris Brookover, Head Coach at 856.231.9622 x242, [email protected] or visitymca-bc.org.

Man oh man does this excite me! Ryan has been one of my best buds since age 3 but we lost contact last year when my family moved away. All the memories with this gem will never fade though… The car rides, just admiring him from a distance in practice etc. Such a great kid, and UMASS should be really excited adding this dog to their team next year! GO MINUTEMEN!

I DONT WANNA CLOSE MY EYES! I DONT WANNA FALL ASLEEP CUZ I’D MISS YOU PEDRICK, AND I DON’T WANNA MISS A THING!

So proud of Ryan, he had to drop so many secs to get to the place he is today. Looks like all those secs added up to one yoked Minuteman!