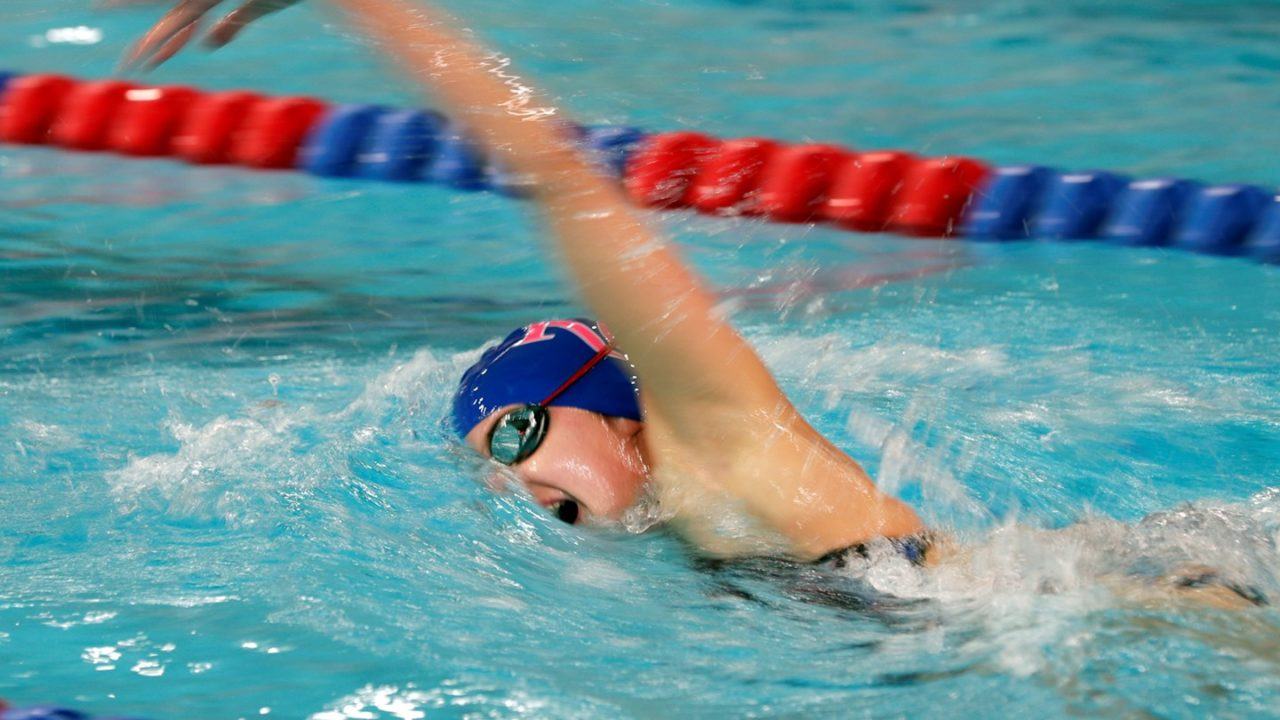 Senior Vicky Xu broke two 10-year-old diving records as the Kansas swimming and diving team started 2019 with a victory over Northern Arizona with a score of 197-101 Friday evening. NAU bested Northern Colorado at the meet. Current photo via Kansas Athletics

FLAGSTAFF, Ariz.  – Senior Vicky Xu broke two 10-year-old diving records as the Kansas swimming and diving team started 2019 with a victory over Northern Arizona with a score of 197-101 Friday evening inside the Wall Aquatics Center.

Xu finished her first three-meter springboard performance as a Jayhawk with a school record score of 392.80. She surpassed the previous record of 325.20 set by Erin Mertz in the 2008-09 season by nearly 70 points to claim the top spot in the meet.

The Jayhawks led themselves to success when they opened the competition with five straight victories in the lanes as well as the jaw-dropping three-meter winning performance Xu in the diving well.

Kansas followed with a steady, yet strong pace and did not disappoint. The team concluded the 16-event meet with a total of 13 gold medal finishes and second-place results in the remaining 3 events. Those finishes and final victory for the team added to a now standing 5-0 winning streak of the season by the Jayhawks.

QUOTES
Head coach Clark Campbell
The performance surpassing expectations:
“We’ve been working hard not only since we’ve been up here, but for the entire break, so we’ve not done a lot of racing. So you never really know how they are going to respond to it, especially with the altitude component thrown into it as well, and they really competed at a super high level. Time wise, we weren’t very fast, but that is kind of expected when you are at 7,000 feet (above sea level), but what we did is compete really well – I am really happy for the swimmers. Jenny Nusbaum did fantastic, Greta Olsen was doing better – it is funny how altitude affects some people differently than others, it is definitely hit and miss. Every single group on the team had good performances. Some people didn’t perform the way they would have liked to, but I think the altitude affected them a little bit more than their teammates.”

On Xu’s diving performances:
“We were super happy for Vicky in her first competition getting two school records and really elevating our diving team. She is such a high level athlete that it has really brought up everyone’s game, and she is fun to watch. She is really into the team aspect of our program and having fun and throwing some really high-level dives. So it is not only helping the diving program, but it is helping all of us.”

How everyone is feeling to be back in competition in altitude:
“I think (we were) really apprehensive going into the meet and then coming out of the meet, we felt really good about it. I talked to the team about how we are tougher than we think we are, and there won’t be another meet that they will do this season that will be as tough as this. When you are in altitude, everyone is uncomfortable really soon, so you really have to lean into that and figure out how you are going to finish feeling that way and they did great. The big take away coming out of this is that we are tougher than we think we area and we really gel well as a team.”

UP NEXT
The Jayhawks’ get ready to travel to Liberty, Missouri on Wednesday, Jan. 16 to face William Jewell.

FLAGSTAFF, Ariz. – The Northern Arizona women’s swimming and diving team went one and one during Friday afternoons dual meet against Kansas and Northern Colorado.  The Lumberjacks beat Northern Colorado by a score of 172-to-117, however the Lumberjacks lost to Kansas by a score of 197-to-101.  The dual meet was senior day for the ‘Jacks with the team honoring its six seniors: Monique King, Tatiana Kurach, Olivia Payne, Andrea Schmidt, Sarah Takach and Christina Torrente.

“The seniors have just been solid for us since they first stepped foot on campus,” NAU head coach Andy Johns said. “They are all just great people, great students, great leaders and most importantly great teammates.”

After the one and one performance on senior day, NAU moves to 4-3 on the season, while being 3-0 against WAC competitors.

Northern Arizona was able to take three outright wins in the meet in the pool and also had the best team performance on the boards in the dual meet.

Diving Results
The dominant senior duo of Kurach and Torrente put on a show in the aquatic center for their senior day with both placing in the top three in the 1-meter and the 3-meter events. Kurach placed second in both events as she trailed Xu Vicky of Kansas, while Torrente placed third in both.

The fellow Lumberjack divers put together quality performances as they placed between fourth and eighth place in both events.  Sophomore Jenny Cheetham pieced together a nice meet as she took fourth in both events, while the senior Payne had a nice 1-meter event placing sixth.

Swimming Results
The Lumberjacks picked up three outright victories in the meet.  The first win for the ‘Jacks came way of the senior Schmidt, in the 200 butterfly with a time of 2:05.76.  Northern Arizona’s next victory came in the following race where sophomore Elisa Rodriguez was able to remain her dominant self and win the 50 freestyle with a time of 23.46.  The final victory for the Lumberjacks came from fellow sophomore Niamh McDonagh in the 200 Individual Medley.

Although not winning the events, NAU had other strong performances on the day with both their 200 medley relay and 400 free relay taking second to Kansas.  Rodriguez’s day wasn’t finished as she took second in the 100 freestyle, only trailing Kansas’ Jenny Nusbaum with a time of 51.37.

The Lumberjacks were able to continue the trend on the season, as a dominant freestyle squad with the senior King taking third in the 1000 freestyle, where she trailed two Jayhawks in the event.  The final NAU swimmer to place in the top three was sophomore Hope Williams in the 100 breaststroke.

“This is a tough time of the year as we are training hard as we have a few more weeks of hard work before we can rest a little bit and sharpen up for the conference championship,” Johns said.

Looking Forward
Northern Arizona will go on the road with the diver’s next meet being the UCLA Diving Invite from Jan. 18-20 in Los Angeles, Calif., while the entire team will compete again at Boise State

FLAGSTAFF, Ariz. – The Northern Colorado swimming and diving team returned to the pool on Friday night after a long break to the five-time WAC champion Northern Arizona. The Bears fought hard against the powerhouse Lumberjacks but fell 172-117.

Herrera earned her first place finish against NAU in the 200 breast stroke. She touched the wall in 2:27.30. It is her best time of the year in the event. In the 100 breast stroke, Herrera took second place with a 1:06.62.

Sunneva Robertson and Emily Hamel claimed the other two second place finishes for Northern Colorado in the meet. Robertson, swam the 200 free in 1:57.53, while Hamel swiftly finished the 50 free in 24.06.

What’s ahead
Northern Colorado returns home next week for their final home meet of the year. The Bears host WAC opponent Idaho on Saturday, January 19 at 2 pm. Prior to the meet inside the Butler-Hancock Swimming Pool UNC will honor its graduating seniors.