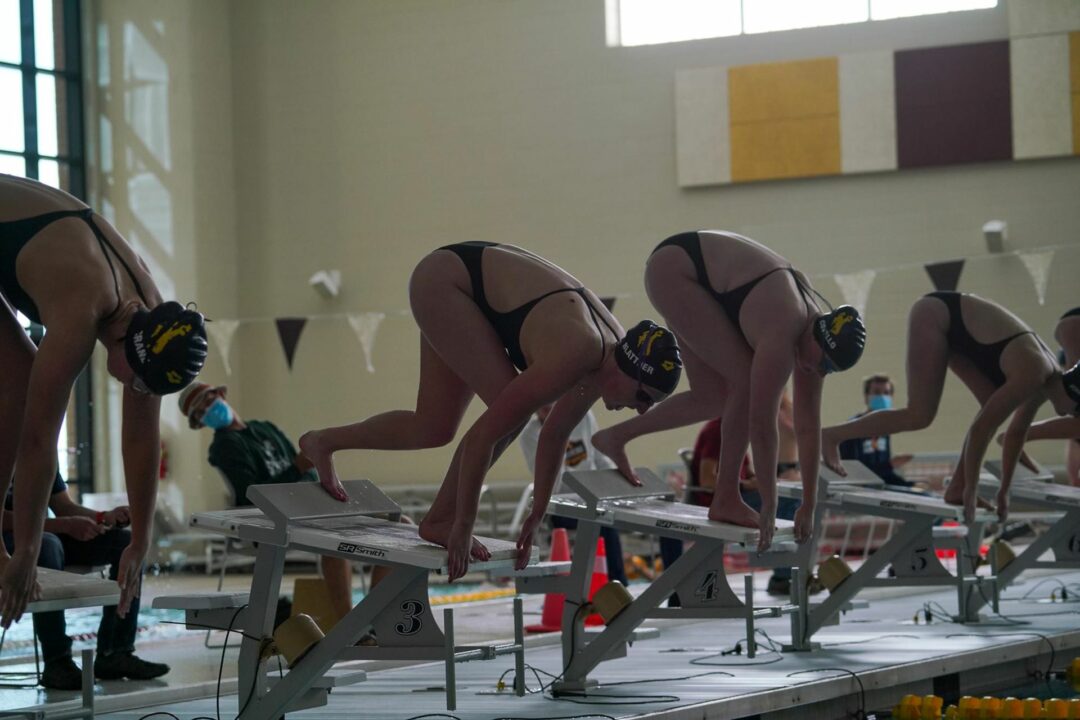 After almost two months out of the water, Wyoming defeated the Colorado School of Mines on Friday, winning 22 of 28 events. Archive photo via Wyoming Athletics

Wyoming vs. Colorado School of Mines

LARAMIE, Wyo. (1/14/22) – The University of Wyoming swim team shook off the rust Friday at Corbett Pool against Colorado School of Mines. It was nearly two months since the Cowboys and Cowgirls last took to the competition pool, but it didn’t appear that way.

Wyoming claimed wins in 22 of the 28 events against the Orediggers. Dig a little deeper and one would find that the Pokes took first and second in seven events, first, second and third in six events and the top four spots in one event.

“The energy and the hard racing the team put out today, you could tell they’ve been chomping at the bit to do this,” head coach Dave Denniston said. “I think they raced really well. It’s fun to do what they love to do. This is why we do the sport, and having the opportunity with Mines coming up was such a blessing for us.”

The 50-yard freestyle represented the most impressive showing from the Cowboys all night. Grant Sloan led a pack of four swimmers that touched first, second, third and fourth.

The 50-yard freestyle for the women had an impressive showing in its own right. Kira Crane was the first of three Cowgirls to finish in the top three.

The 200-yard backstroke was a similar story, as Kayla Cunningham led a 1-2-3 finish. Rachel Horne did the same thing in the 100-yard breaststroke, while Katelyn Blattner and Emily Giles led a similar charge in the 500-yard freestyle and 100-yard backstroke, respectively.

Max DeYoung rounded out the 1-2-3 finishes, as he paced the crew in the 100-yard backstroke.

“Our team is a scrappy team that likes to get their hand on the wall, and I think they did that really well,” Denniston said. “Just watching them come together is fun to see, as this team develops an identity for the last time. It’s special for all of them.”

Wyoming is back in action Saturday for an intrasquad meet at 4 p.m. at Laramie High School. The meet will serve as Senior Day for a distinguished group of Cowboys and Cowgirls.

LARAMIE, Wyo. – Colorado School of Mines got its weekend started with a dual at Wyoming, taking on the Division I program with a longer-than-expected stay in Laramie.

Unfortunately, the snowy weather conspired to keep the Orediggers in Laramie overnight due to road closures, and that has forced a schedule change for Saturday. Mines’ 9 a.m. meet vs. Adams State is now canceled, but the two teams still plan to swim at 3 p.m. in Golden, with Senior Day ceremonies preceding that meet.

NEXT UP
With the schedule change, Mines hosts Adams State Saturday at 3 p.m. with Senior Day starting at about 2:45 p.m.