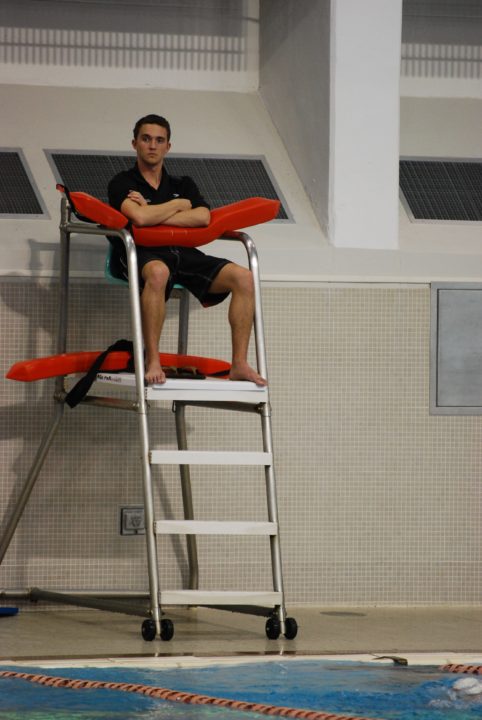 A bus full of high school coaches and swimmers put their lifeguarding skills, quick thinking and bravery to great use when they came upon a destructive car wreck on the way home from a meet. Stock photo via Janna Schulze/SwimSwam.com

Wyoming’s County10 news site is reporting the story of a high school swim team heroically jumping into a desperate car wreck situation on the way home from a meet.

Last Saturday, the Riverton High School swim team was aboard its team bus, on the way home from a meet in Gillette when an accident occurred in front of them on the slippery roads.

According to County10, a car and a semi truck collided, partially blocking the road in front of the team’s bus. The bus driver, Terry Grant, narrowly avoided the wreckage, clipping the car just slightly before pulling to the side of the road.

The coaches were the first to respond. (County10 tells the coaches story here). Grant and assistant coach Shawn Rivera ran out of the bus to the wrecked car, while head coach Jay Dayton stayed with the swimmers on the bus. Rivera and Grant heard a man and a child in the wrecked car, screaming for help. County10 reports that Rivera was nearly finished cutting the man’s seat belt off when another semi truck appeared on the horizon and smashed into the car as Rivera watched helplessly. The coach bravely ran back to the car and finished getting the man out of the wreckage, followed by the boy, taking both back to the team bus.

It was on the bus that the swimmers, mostly sleeping when the accident occured, sprang into action. Several of the swimmers were certified as lifeguards and used their training to help treat the man’s and boy’s injuries. One of the swimmer’s mothers is a nurse, and she helped walk them through some treatment over the phone. All of the swimmers pitched in to help with treating and calming the two wounded, with swimmers even pitching in to provide headphone cables for tourniquets among other things.

County10 talked to seniors Adrian Cook and Erik Horyza, juniors Romblo Cortez and Justyn Root and freshman Jody Stransky in this story, which goes into more detail, but ultimately, the swimmers kept the two alive for somewhere between 15 and 30 minutes before EMTs arrived on the scene.

The swimmers said they didn’t consider themselves heroes, but their on-the-spot actions are certainly receiving awe-inspired recognition. For their part, the swimmers chalked it up to yet another bonding experience on the journey of a swimming band of brothers.

The early report of the crash is here. Here again are the articles linked above:

Very proud of this fine group of boys. They are angels.

As a father of one of the swimmers mentioned, I know these boys and their coaches personally. I can’t say I’m surprised with the actions they took, but I can sure say I’m proud of them all!