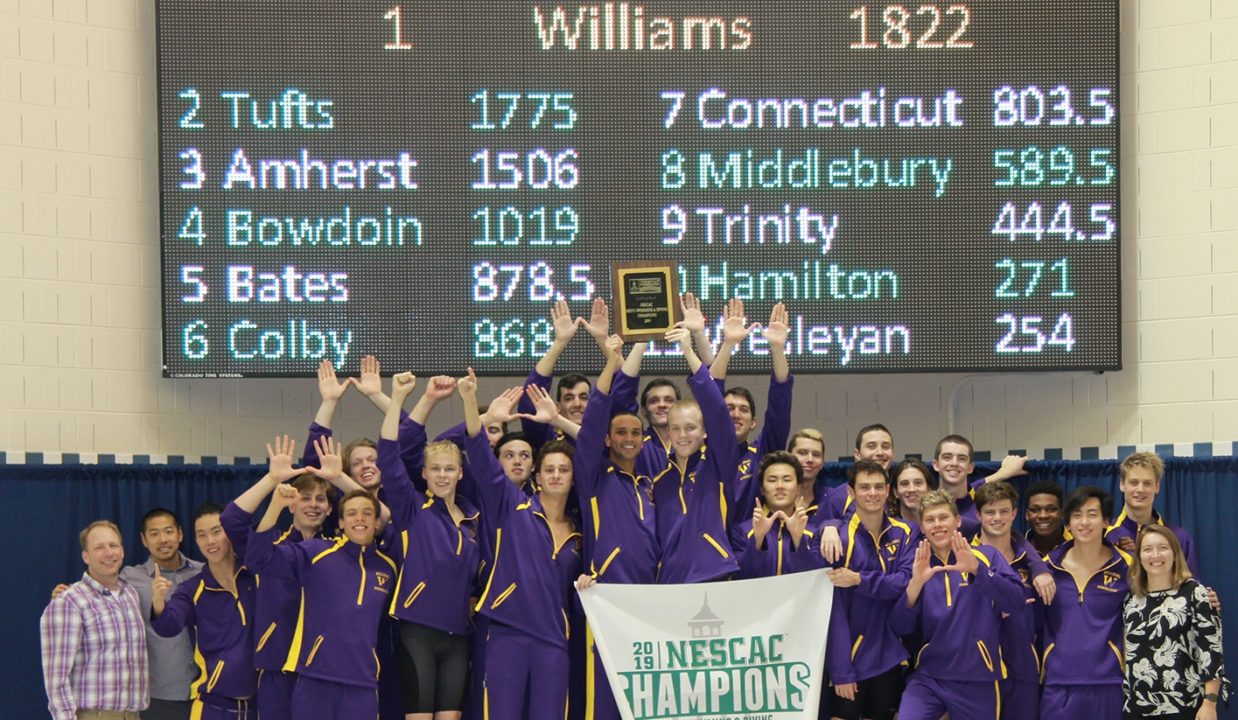 Freestyle and breaststroke swimmer Aidan Keillor has committed to swim for DIII Dicksinson in fall 2021. He will join the Red Devils’ class of 2025.

MIT, home to a pair of top 10 swimming & diving programs, has canceled all winter sports competition amid the resurging coronavirus pandemic.

The final night of the 2019 NESCAC Men’s Swimming Championship opened with Williams in first, looking to regain their title after seceding it to Tufts in 2018.  While Williams swam well in the morning — scoring 13 / 0 / 3 to Tufts 8 / 7 / 3 pending the mile — the final placing was still up for grabs.

A number of athletes were still up for Swimmer of the Meet coming into the night — with 200 and 500 free champion Jamie Lovette of Williams and 50 and 100 backstroke champion Kingsley Bowen of Tufts emerging as front-runners.  The night did not disappoint as Tufts and Williams jockeyed for the 2019 title, a new Swimmer of the Meet was crowned, and a number of Meet and Pool records were set.

In a “down goes Fraser” moment 400IM champion and 500 free runner up Jackson Karofsky took the 1,650 and with it Jamie Lovette’s chances at Swimmer of the Meet.  The Williams distance troika of Karofsky, Lovette, and Trunsky was out fast but at the 250 it was a five man race as they were joined by Bedell of Colby and Nussbaum of Connecticut. Bedell and Nussbaum dropped back and at the 500 the Williams troika led in 4:40.  At the 600 Bedell moved up, just seven tenths behind Trunsky who was then in third, making it a four man race.

Karofsky then made his move, out splitting the field over the next 300 to lead at the 800 by 1.3 seconds.  He lengthened that lead by a body length at the 1,000, going through in 9:25, and at the 1,200 he had opened it up even more to 3 body lengths with Trunsky and Lovette neck and neck for second.  Trunsky made a move at the 1,400 as Lovette faded to open up a two body length lead over him.  At the 1,500 Trunsky was in control, leading by 7 seconds over Karofsky, with Lovette fading.  Karofsky held on for the win in in a new pool record, followed by Trunsky and Lovette.  Last year’s 12th place finisher Jared Nussbaum was fourth in 15:48.86, a Connecticut record and over 35 seconds faster than his time in 2018.

By dropping to third Lovette likely lost his bid for Swimmer of the Meet.  After dominating the 500 and the 200 it was a surprising placing for the reigning champion, despite the fact that he only defeated Karofsky by just over a second in 2018.  Lovette’s 15:48 swum against Connecticut in January was one of if not the fastest in season 1,650 swims in NESCAC history and he was widely expected to dominate this event.

Tufts senior Kingsley Bowen took the distance dorsal event and with it likely solidified his place as Swimmer of the Meet.  Bowen led at every wall, had a 1.5 body length lead at the 100, and won by two body lengths in a new pool record.  In finishing first Bowen is now the only three event winner and has dominant wins in all three backstroke events as well as the fastest butterfly split in the field in the 400 Medley Relay.

Roger Gu broke the Pool record in a dominant :43.78 for the win, followed by Amherst freshman Scott Romeyn.  Bowdoin’s Karl Sarier — the 2018 champion — was third in his best time of the weekend and over a half second faster than his freestyle split in the 400 Medley Relay on Saturday night.  As usual, Sarier had the fastest back 50 in the field (:22.53) but it was not enough to overcome sprint specialists Gu and Romeyn.  All three were under the :44.88 it took to go to NCAA’s in 2018 although Gu and Romeyn had already likely qualified in the 50 free and relays.

Points wise Tufts extended their point lead to 57 after the event but with Williams having more swims in the 200 Breast and Fly they appeared to be running out of time for the team title.

Amherst’s Sean Mebust became the first NESCAC swimmer under 2:00 since 2012 in the morning, putting a scare into Paul Dyrkacz’s 2012 NESCAC record 1:58.83.  At night Mebust was out fast in :57.67 (His :55.51 first half of his morning swim would have won the 100 Breast), and led by a body length at the 100.  He dropped the hammer in the third fifty, splitting 30.97 and a half second faster than the rest of the field to extend that lead, and finished two body lengths ahead.  Although he was unable to break two minutes for a second time, it was a dominant win for the Amherst junior to follow up on his Amherst school record from the morning.  He currently sits second in the country.  It was also an excellent weekend for the Mebust family with 5 individual top 8 finishes and 4 All NESCAC awards between brothers Sean of Amherst and Ted of Bowdoin.

Bowdoin’s Stephen Pastoriza — who had the fastest breaststroke split in the field in the 400IM — finished second from lane 8 to earn his first All NESCAC award in his last collegiate race.  Pastoriza had the second fastest last 50 in the field (behind Mebust) to drop his personal best by four tenths for a new Bowdoin school record.  Chris Quinones was third, holding off Williams’ Jack Melnick by .03.

Delcompare was out fast in :51.96 but teammate David Pearcy hung with him and they were even at the 150.  Delcompare rocketed home in :28.62 for a new personal best time, just ahead of Pearcy who was right on his best.  Williams took the top three places, with freshman Sean Tan in third, and placed four in the top eight to open a 57 point lead on Tufts, 1,750 to 1,693.  With neither team having divers that lead would remain going into the 400 Free Relays — barring a disqualification an insurmountable lead for Williams.

Like on one meter it was a two man competition between defending Diver of the Meet, Bowdoin senior Mitch Ryan, and top qualifier from prelims, Amherst junior Bennett Fagan.  After three rounds, Bowdoin’s Ryan led by less than a point.  A dominant fourth round dive gave him a twenty point lead.  Amherst freshman Tom Amsbry scored over 70 points on a fifth dive with a 3.0 DD and closed on Ryan, moving up to second ahead of teammate Fagan, but he was too far behind to take the lead.  Ryan swept the diving boards while the top three met the NCAA qualifying score.

Tufts and Amherst entered the event as heavy favorites on the backs of sprinters Roger Gu and Scott Romeyn and Williams’ strong 800 relay made them look a lock for third, despite their 4th place 200 Free Relay finish.  Bowdoin led off with Karl Sarier as he attempted to improve on his individual 100 free time of :44.66.  Sarier was first at the 100, but was unable to improve his time splitting :45.00 and followed closely by Jack Koravos of Amherst (:45.69) and Tyler Tatro of Tufts (:45.95).  Bowdoin freshman Ted Mebust’s :45.02 was the fastest second split of the field, giving them a three body length lead at the halfway point.  After using their two big guns there was skepticism Bowdoin could hold that place but their third swimmer, Julian Abaldo, had the second fastest third split (:45.47) behind Williams’ Aaron Stanton (:44.90) and just ahead of Amherst’s Charlie Seltzer (:45.57), giving Bowdoin just over a second lead over Amherst who was followed closely by Tufts with Williams in fourth.  Amherst Rookie of the Year Scott Romeyn closed in a blazing :43.65 (.05 ahead of Tufts Roger Gu) for the win in 3:00.17, followed by Tufts with Bowdoin holding on for third.  All three were under the 2018 qualifying time — of particular note, Bowdoin has not sent a men’s relay to NCAA’s in over twenty years and the program eagerly awaits to see if their relay ranked, 11th going into the weekend, goes.

Rookie of the Year — Scott Romeyn, Amherst College.  Romeyn was runner up in the 50 and 100 Free behind NESCAC record holder Roger Gu and anchored the Amherst sprint relays.  His 50 and 100 times were Amherst College records with the 100 Free breaking Connor Sholtis’ 2015 record.

Diver of the Year / Four Year Diver — Bowdoin’s Mitch Ryan won both 1 and 3 Meter and was named Diver of the Meet for the second consecutive year.  Ryan qualified for NCAA’s his first three years and finished 12th on 1 Meter as a freshman.  Ryan was also the four year high point diver.

Swimmer of the Year — Kingsley Bowen.  Bowen swept the backstrokes and showed his versatility with the fastest fly split on the 400 Medley Relay and a 20.1 split on Tufts’ B 200 Free Relay.

Four Year Swimmer (most points in 4 years) — Kingsley Bowen with 360 career points, three ahead of Bowdoin’s Karl Sarier.  Jack Melnick of Williams was third, followed by Josh Chen of Amherst and Alex Bedard of Bates.

Diving Coach — Kelsey Willard, Bowdoin.  Willard placed three divers in the top eight in the 3 meter as well as 1-6-9-10 finishes on 1 Meter.  Willard, a Bates College record holder, was also coach of the year in 2018.

Coach of the Year — Steve Kuster, Williams.  Kuster’s team avenged their 2018 loss to Tufts as his team won the NESCAC title for the 17th time since 2000.  After the meet coach Kuster told SwimSwam “I am very proud of the team and their effort.  Its a long season and the time and work they put in throughout really showed.  It was a great meet, everyone on all of the teams should be proud of their finishes, and we look forward to seeing them at NCAA’s.”

It’s Frazier as in Joe the great boxer not Fraser as in Dawn the great Aussie swimmer. Also the Amherst 100 free record is 44.26 set by Sholtis in 2015. It’s not likely long for the world given Romeyn seems to get faster every time he swims. Wouldn’t be surprised to see him break it in Greensboro. Congratulations to all athletes, coaches and their supporting parents.

Kingsley Bowen is not from Amherst.

You’re right Kingsley is not from Amherst he’s from Ohio and one of those outstanding local swimmers who opted for the cultural delights of Medford rather than study in the bucolic setting of Gambier.

Observations on both the meet and on this recap: 1. Your description of Lovette, Karofsky, and Trunsky as a ‘troika’ is a highlight in the otherwise bleak world of 21st century sports writing. I was lucky enough to watch them duke out a timed 5K LCM once, on a training trip in Ft. Lauderdale. Same lane, three abreast, dead heat the whole way. I think there were some bruised ribs afterward. My mind immediately jumped back to that day when I read this. What a perfect metaphor! You nailed it! 2. However, I object to the expression ‘putting a scare into’ a Paul Dyrkacz record. Paul takes the tears of his enemies. Nobody ‘puts a scare’ into Paul: not nobody,… Read more »