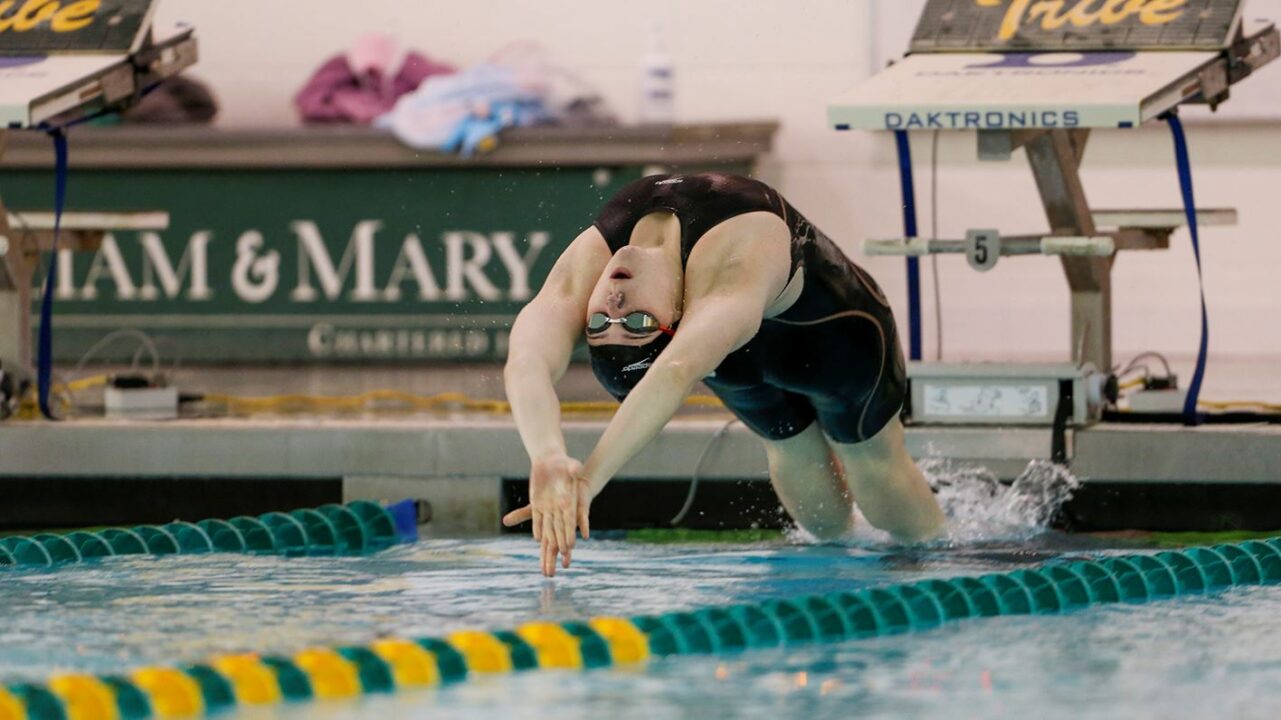 WILLIAMSBURG, VA.- William & Mary women’s swimming cruised to a 143-118 victory over Towson Saturday behind nine individual wins in 14 events. The win was highlighted by Missy Cundiff swimming a brisk 22.83 to win the 50 free in fashion, setting a new pool record.

Kenna would out-touch Vanbourgondien as the pair finished one, two in the 100 back. The pair would once again take first and second later in the meet swimming 2:04.81 and 2:07.41 in the 200 back.

In the 100 it would be Stevenson just beating Cundiff to the wall as the teammates finished one, two with times of 51.91 and 52.02 respectively. The Tribe would be sure the meet finished in the same manner it was started, a Green and Gold relay win. Kenna, Stevenson, and Cundiff, along with Elizabeth Intihar would swim to a 400 free relay win with a time of 3:28.82 in the day’s final event.

The Tribe women are now 2-0 after last week’s victory at Johns Hopkins. Cundiff has set a pool record in the 50 free in each of her first two meets this season.

Up next: The Tribe will be at home next weekend for a meet with UMBC. The two squads will get things started in the Rec Center at 2:00 p.m. Saturday afternoon.

Hertweck took the Tribe’s first individual win of the day, swimming a blistering 20.86 to capture first place in the 50 free. The sprinter would just be edged out, securing a second place finish in the 100 free.

Lowe, a freshman, swam a 1:52.71 to touch out the opposition in the 200 backstroke. It was Lowe’s first event win of his career. Lowe was just six tenths of a second from sweeping the backstroke competitions, clocking in at 51.70 in the 100 for second place.

Distance specialist Owen Miller finished the 500 free in 4:4912 to earn second place and finished the day teaming up with Hertweck, Diego Cruzado, and Eugino Massari to place second in the 400 free relay.

Next up: The Tribe will be at home next weekend for a meet with UMBC. The two squads will get things started in the Rec Center at 2:00 p.m. Saturday afternoon.

WILLIAMSBURG, Va. — Behind 12 total victories, the Towson University men’s swimming team, which was without its divers for the meet, cruised to a 127-89 win over host William & Mary Saturday afternoon at the Tribe’s Recreation Center.Sophomore Brian Benzing landed a pool record in the 100-yard breaststroke, stopping the clock in 55.29 and continuing his unbeaten streak in the event. The Tigers won both relay events as well, including a five-second victory in the 400-yard freestyle relay.The win halted a five-meet winning streak for the Tribe against the Tigers. It was Towson’s first win over William & Mary since Oct. 11, 2014 and first in Williamsburg since Nov. 7, 2003.How it Happened

WILLIAMSBURG, Va. — The Towson University women’s swimming team, sans divers, fell on the road at William & Mary 143-118 at the Tribe’s Recreation Center Saturday afternoon.Towson (2-2) had another strong showing from its distance team as Meagan Clark won both the 500 yard freestyle and the 200 yard freestyle. Karlee Carminati notched a win in the 1,000 free, dropping another seven seconds from her season best. Towson swept the 100-yard butterfly with Hailey Ritter, Samantha Casolo and Ava Enriquez.How it Happened