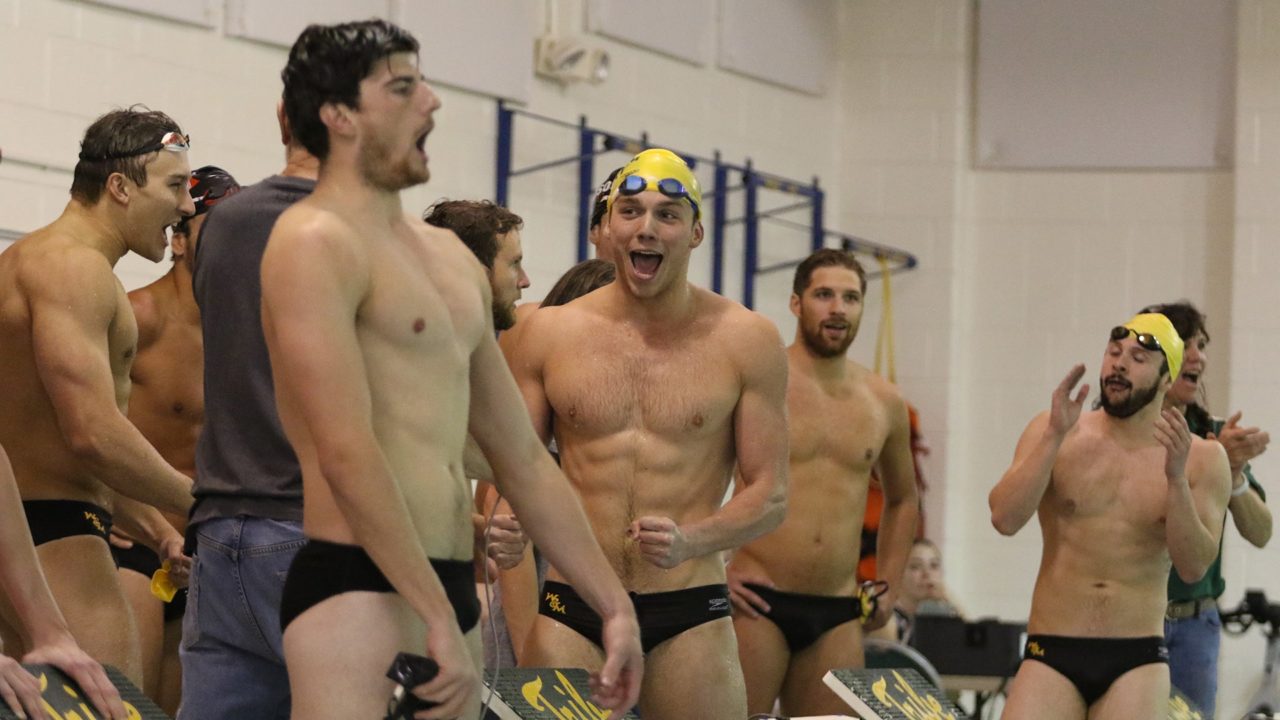 The William & Mary men’s swimming team put on a show for a capacity crowd Saturday, shattering 12 total records en route to a convincing 195-66 win over Davidson. The victory improved the Tribe to 7-1 on the year, while the Wildcats fell to 1-6 overall.

How it Happened
– The win was also notable for the fact that it improved W&M’s all-time record to 405-405-3, marking the first time since Feb. 5, 1932 – a span of 87 years, 11 months, and 13 days – that the Tribe has been .500 all-time.  The Green and Gold defeated Roanoke 54-12 on Jan. 16 that year to be 10-10 since starting the program in 1927-28, but lost to powerhouse Washington & Lee on Feb. 5 and hadn’t been back to even until today.
– On the day, W&M won 12 of 14 events, and broke a total of 12 records, six pool records and six dual-meet records.  That brought the program’s total number of records broken this season to 30 overall.
– Leading things off was the 200 medley relay, where the team of Colin Demers (Virginia Beach, Va.), Ryan Bebel (Westfield, N.J.), Jack Doherty (Middletown, Conn.), and Colin Wright (Williamsburg, Va.) combined to win in 1:28.72, breaking the pool and dual-meet records set back in October by half a second.  It was also the eighth-fastest race in school history.
– Next up was the 1,000 free, and the first of two wins for senior Chris Balbo (Short Hills, N.J.).  He swam 9:24.70, just a second off his own pool and dual-meet records, to win and also set the ninth-fastest time ever at W&M.
– Demers turned in a top performance for the second week in a row in the 100 back, winning in a time of 48.76 to break not just the dual-meet record of 48.86 he tied last week, but also the pool record of 48.93 set back in January of 2014 by Will Manion ’16.
– Senior Ian Bidwell (Pelham, N.Y.) matched Demers with his seventh win of the season in the next event, winning the 100 breast in a time of 56.40.
– Doherty was a double winner on the day, lifting his season total to a career-best eight victories.  First was the 200 fly, where he stopped the clock in 1:50.65.
– His classmate Wright had a day to remember, picking up back-to-back wins in the sprint freestyles and shattering his own records in both.  First up was the 50 free, where he slammed into the wall in an NCAA provisional-qualifying time of 19.81 seconds, well ahead of the pool and dual-meet records of 19.95 he set back in early October.  That was the fastest time in the Colonial Athletic Association at any point this season, and the ninth-fastest race in both school history and Wright’s career.
– After the first mid-meet break, Wright was right back in the water for the 100 free, winning in 44.14 seconds to break the pool and dual-meet records of 44.28 he set last year on Senior Day.  His time was also the 11th-fastest ever at W&M.
– Another senior, Lee Bradley (Crestwood, Ky.), won the 200 back for the second week in a row, timing 1:51.39 for the win.
– In the 200 breast, freshman Kyle Demers (Virginia Beach, Va.) won his first collegiate victory, winning the race to the wall in 2:06.00.
– Balbo’s second win, his team-best 17th of the season, came in the 500 free with a time of 4:37.59.
– Doherty’s second win was another record-breaker, as he took his signature event the 100 fly in 48.16 seconds.  That time shattered not only his own dual-meet record set last week of 48.58 seconds, but also the pool record of 48.72 seconds set by Towson All-American Jack Saunderson in October of 2017.  This was the fifth time this season that Doherty has broken the dual-meet record in the 100 fly, and he has lowered the mark 1.44 seconds so far with one more chance next week.  Doherty’s time Saturday was tied for the 14th-fastest single race ever at W&M as well.
– The Tribe wrapped up the day with another win and two more records in the 400 free relay.  Sophomore Graham Hertweck (Greensboro, N.C.) led the team off, followed by Doherty, Wright, and senior Ian Thompson (Alexandria, Va.) as the quartet combined for the win in 2:58.59.  That broke the dual-meet record of 3:00.95 the same foursome set last week, as well as the pool record of 3:02.00 set in the season finale last year.  The team’s time was also the seventh-fastest ever at W&M.

William & Mary will bring the regular season to a close next weekend, hosting George Washington on Saturday, Jan. 25.  The meet has been moved up one hour to start at 1 p.m. at the Rec Center Pool, preceded by a short Senior Day ceremony in honor of the Tribe’s 17 members of the class of 2020.

After winning last week with top-end speed, the William & Mary women’s swimming team showed it also has strength all the way down the line-up on Saturday, defeating Davidson 155-107 at home.  The Tribe won its fifth-straight dual meet to improve to 5-4 overall and guarantee at least a .500 record for the season, while the Wildcats fell to 3-6 on the year.

How it Happened
– The two teams evenly split the win column, each winning seven of the 14 events, but the difference was made in the next two spots.  W&M took 10 seconds and 12 thirds, providing the edge it needed to get past Davidson.
– The Tribe started off with a win in the 200 medley relay, hitting the wall first in 1:45.01.  Sophomore Anna Kenna (Chantilly, Va.) led-off, and was joined in the winner’s circle by Brooke Lamoureux (Virginia Beach, Va.), Madeline High (Raleigh, N.C.), and Missy Cundiff (Leesburg, Va.).
– Junior Megan Bull (Hillsborough, N.J.) continued her stellar season with two more wins, taking the 1,000 free in 10:25.70 and coming back later in the 200 breast with a second gold in 2:21.37.  Her first win put her over 1,000 points in less than three full seasons.
– Kenna came back to take the win in her signature event, the 100 back, stopping the clock in 57.59 seconds.
– Two more wins came from the talented freshman class.  First up was Katie Stevenson (Wilton, Conn.), picking up her first collegiate victory with a 52.46 performance in the 100 free, followed by Elizabeth Intihar (Columbus, Ohio) winning the 500 free in 5:05.50 for her fourth victory of the season, best in the rookie ranks.
– The final race of the day was another W&M victory, as the quartet of Cundiff, Stevenson, Inez Olszewski (New York, N.Y.), and Tara Tiernan (West Hartford, Conn.) combined to swim 3:30.02 to take the 400 free relay.

William & Mary will bring the regular season to a close next weekend, hosting George Washington on Saturday, Jan. 25.  The meet has been moved up one hour to start at 1 p.m. at the Rec Center Pool, preceded by a short Senior Day ceremony in honor of the Tribe’s 17 members of the class of 2020.

The Davidson men won two events over the Tribe. Walter Dauksher captured first in the 200 free in 1:42.76, as teammate Ian Hentenaar followed in second for a 1-2 Wildcats’ finish. Wildcat Crossan Cooper won the 200 IM in 1:54.99.

Up Next
Davidson’s next meet will come in Cannon Pool, as the Wildcats host Gardner-Webb for Senior Night on Friday, Jan. 31.