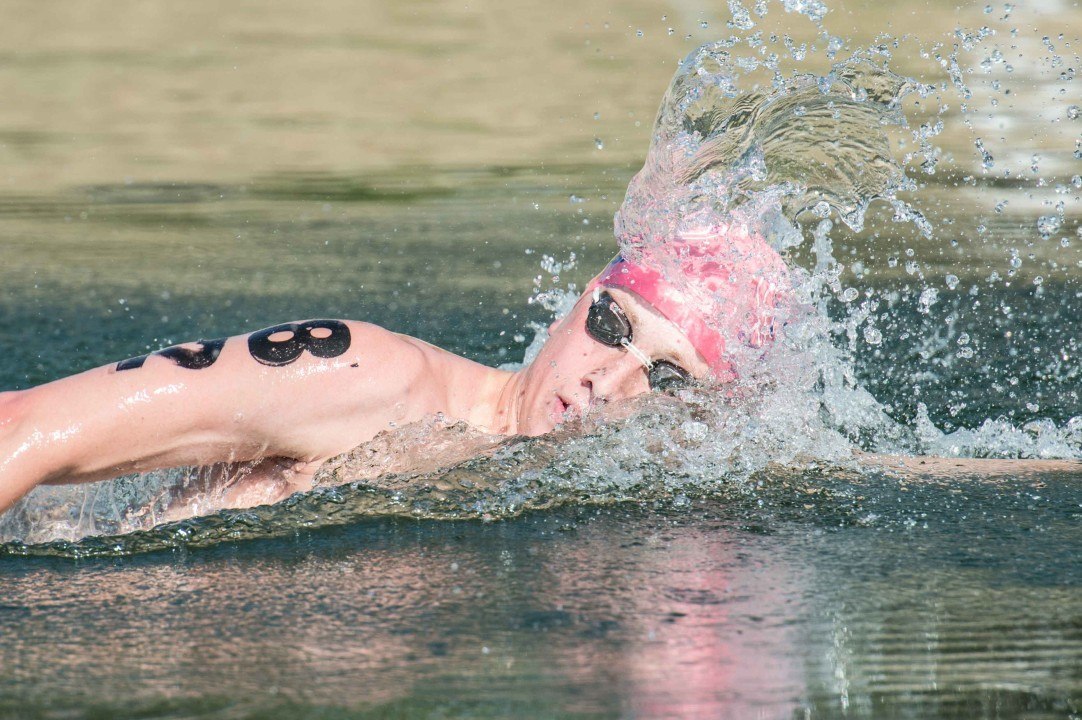 Amidst the backdrop of crystal clear waters and white sands, a heated battle ensued this past Saturday, as swimmers clamored... Archive photo via Mike Lewis/Ola Vista Photography

Amidst the backdrop of crystal clear waters and white sands, a heated battle ensued this past Saturday, as swimmers clamored to the finish at the 23rd annual Flowers Sea Swim in The Cayman Islands.  Notable athletes from past and present traveled to the Caribbean locale, including Olympians Peter Vanderkaay, Davis Tarwater, and Ian Crocker. The event typically sees over 900 registrants come from around the world, and welcomes athletes of all abilities, with registration fees donated to Grand Cayman Special Olympics.

For the 2015 edition of the event, United States National Teamer Jordan Wilimovsky was the man who came out on top, clenching the men’s 1-mile ocean swim title in a time of 16:54.45.  That time was just a second over runner-up finisher Chip Peterson, a fellow U.S. open water national team member who touched just behind in a time of 16:55.70. Third place went to Brendan Casey in a time of 17:19.52.

Wilimovsky’s victory adds to his winning streak, which includes taking the men’s 10k title at the 2015 USA Swimming Open Water National Championships this past April, punching his ticket to swim at the upcoming FINA World Open Water Championships.

Reflecting on his Flowers Sea Swim win, Wilimovsky told The Cayman Compass, “I was second two years ago. I definitely wanted to come out here and win. It was a lot of fun.  I tried to go for it from the start.”  Revealing his proclivity for what many would consider mega-distance swimming, Wilimovsky commented that the race “ is just a mile, so we tried to sprint the whole way. I always want to try and do well. It is really fun to win this time.”

The women’s race saw former North Carolina Tarheel, Stephanie Peacock, dominate the field, winning in a time of 18:00.33, almost a full minute faster than the second place finisher, Aisha Thornton from the United Kingdom (18:53.64).  Peacock recently won the 2015 Crippen Cup 10k in March of this year, as well as finished 9th in the 5k race at the 2015 USA Open Water National Championships.

guess Peacock didn’t need to ‘cramp up’ after this race….

0
0
Reply
A Friend
Reply to  Durham

As someone who knows Stephanie very well I am very disappointed in your comment. I can personally attest to the fact that she is the hardest working, most competitive, and strongest willed person I have ever known. If you have ever met her you would know that she is also an exceptionally kind and caring individual, that always thinks of others first. Your comments prove that you know nothing about her, or any medical issues she has ever had. The idea that she would fake a cramp on the last 50 of an ACC championship swim, in a race that she was clearly about to win by a large margin, is completely ludicrous and insane.