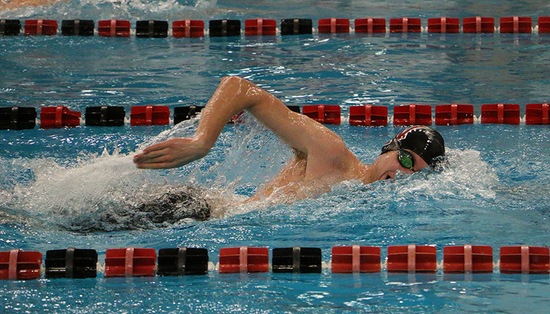 The Whitworth teams have both taken an early lead at the 2020 Northwest Conference Championships thanks to a pair of victories in the 200 medley relay. Current photo via Whitworth Athletics

FEDERAL WAY, Wash. – The Whitworth swimming teams have both taken an early lead at the 2020 Northwest Conference swimming championships thanks to a pair of victories in the 200-yard medley relay.

The Pirate men won the 200 medley relay with a time of 1:31.52, 1.7 seconds ahead of runner-up Pacific Lutheran.  Byron Rossmiller, Owen Lempert, Isaiah Ross and Finn McClone combined for the victory in a race that saw three schools disqualified for early relay exchanges.

Whitworth’s men ended the night with a second place finish in the 800-yard freestyle relay.  Ross led off and McClone anchored, with Jake Davies and Ryan Burch in between.  The quartet posted a time of 6:51.37, 2.5 seconds behind Linfield’s winning time of 6:48.84.

The Pirate women also won the 200 medley relay in the meet’s first event.  Hannah Galbraith, Jamie Siegler, Kaitlyn Wornath and Carly Hoff sprinted to a winning time of 1:46.00, finishing .93 seconds ahead of PLU.

The meet continues on Friday morning with the championship’s first session of preliminary heats.