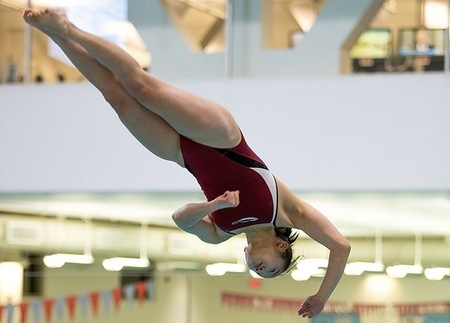 MIT sophomore diver Deborah Wen (Honolulu, Hawaii) broke the six-dive pool record on the 1-meter board and the Engineers won 13 of 16 events en route to a dominant 201-99 win over Tufts. Current photo via MIT Athletics

– The Lead: MIT sophomore diver Deborah Wen (Honolulu, Hawaii) broke the six-dive pool record on the 1-meter board and the Engineers won 13 of 16 events en route to a dominant 201-99 dual meet win over Tufts on Friday night in Cambridge.

– MIT swept the top three positions in three swimming events including the 100-breast and the 50-free. Ketonen paced the Engineers in the 50-free as she clocked a time of 24.51 and was followed by junior Lilia Staszel (Brighton, Mich.) and first-year Lindsey Bjornstad (Mequon, Wis.) who tied for second in 24.85. Ketonen also won the 100-free in 53.59 and was followed by classmate Shannon Hagmaier (Longwood, Fla.) in 53.61 and Staszel in 54.57.

– MIT rounds out its dual meet schedule next Saturday, February 2 against Amherst College at 1:00 pm. Prior to the meet, the Engineers will honor their five graduating seniors.