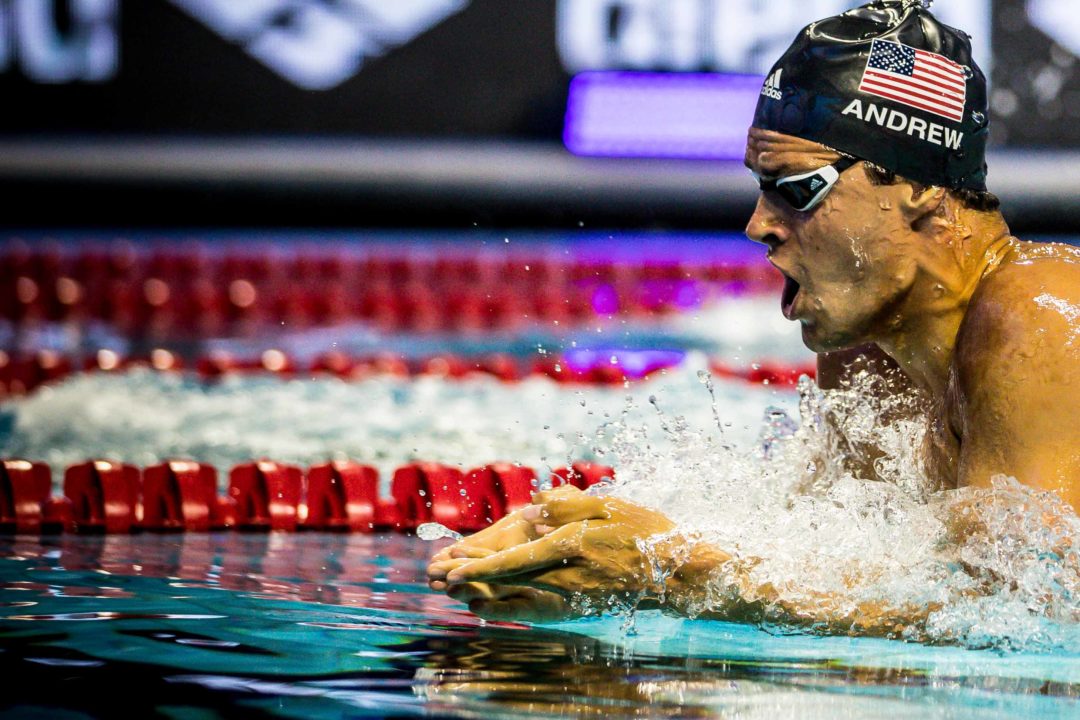 Andrew critiques his 59.14 from Des Moines and shares a few key things he's been working on recently in his breaststroke. Archive photo via Jack Spitser/Spitser Photography

Two days after breaking down his 200 IM best time from the Des Moines Pro Series in one of his daily vlog posts during the COVID-19 pandemic, Michael Andrew took a look at his 100 breaststroke from the same meet on Saturday.

Prior to watching and analyzing his performance, the five-time Short Course World Champion shared a few things he’s been working on recently in breaststroke.

A few notes Andrew makes during the race:

WATCH THE VLOG BELOW

Andrew’s swim in Des Moines ranks him sixth in the world for the 2019-20 season and the fastest among Americans.

Maybe not as eye opening as the 2 IM one, but still pretty cool.

Though tbh I’m more shook that they moved all that giant gym equipment in the previous episode. And there is even a power rack looking thing! Just use that! 😩

I’m interested in knowing wtf the dryland plan is, lol.

It is very strange to me that the weight “program” he is working on is so machine-dominant. Ballparking it, I’d say that most elite athletes training is 90% not reliant on machines, but it seems almost opposite for MA. A squat rack, a bar, some plates, a bench, some dumbbells should cover most of the equipment that other swimmers would need for their heavier lifting component of dry land.

Right? And I mean idk if they’ve new thoughts on USRPT recently, but Rushall’s whole deal was that it was *only* worth doing the exact movement patterns you’d do in a race. (Which basically everyone thinks is sorta nutso.) Which I mention because I can’t think of any less applicable movements than using weight machines. The only rationale I could think of was that you don’t really have to learn any “technique” to use them? Which sorta makes sense – bad technique with a barbell is a bigger injury risk than a machine, most likely – but given that there’s basically infinite time to do dryland and no time to swim…let me teach you how to deadlift, Michael. (I’ve recently… Read more »

It is very bizarre. If your only goal is to lift heavy weight and build a lot of muscle, then I guess a chest press machine, hamstring curl machine etc are fine, but for an athlete that is looking for functional strength through engaging stabilizer muscle groups, it doesn’t make sense to me.

That “coach” at WCs was not just any coach, but the great Jozsef Nagy. There’s a video somewhere of him showing MA.