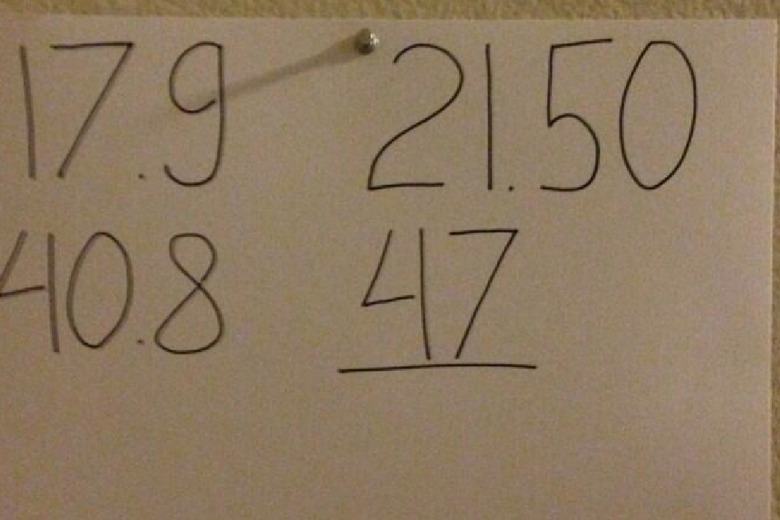 Vlad Morozov reveals his goald for this summer...

For those of you who aren’t on “the Twitter,” or simply missed it, here’s a little update on what Vlad Morozov is shooting for this summer.

As they say, it’s not a goal unless you write it down. This is a great strategy for young swimmers to learn from: writing down realistic goals, and putting them somewhere that you’ll look at them every day. Not to put too much pressure on yourself, but for whenever you hit the down cycles that are inevitable in training as difficult as swimming, it’s a good reminder of why you’re doing it, and what you’re shooting for.

And those times.. are Not Medal level..

Magnussen/Adrian/Agnel can go faster than that at 100.. maybe even Verschuren and Garcia..

At 50 Cielo/Manadou (if the first on perfect conditions) they can break the 21.3 barrier… and some other guys (Fratus, Jones, Adrian) can go sub 21.5…

Who do you think is the most likely to go sub 47?

Gotta be Magussen doesn’t it? He came so close last year at Aussie Trials…if things flatten out in Swimming Australia a little bit, he oughta be able to get there.

If he went uner 46.9, I think the magnitude of it would be slightly diminished becuase of his absolutely innapropriate bahavior during the olympics.

who cares about his actions at the Olympics? I know a lot of people won’t agree with me on this, but it’s not for us to like them based on their individual personalities or actions outside of the pool. I’ll hearken back to when Tiger Woods was getting reamed in the press for some questionable actions. It’s THEIR OWN personal lives, stay out of it. I love tiger as an athlete and continue to support him. He is (was) a winner, I love great athletes. Magnusson is so talented, I love watching him swim. I don’t care what he does outside of the pool, as long as he swims fast… Do you not like or think Phelps’ legacy is diminished… Read more »

I’d say Magnussen is definitely the favorite to break 47, but I also don’t trust him too much in big moments. He didn’t perform his best when it mattered most (London 2012) but he did kill it last world championships. I’m excited for the rematch, wonder if Adrain has any sort of mental edge over James?

Magnussen has shown he is the most capable. A half a second improvement in a year for Adrian will be awfully tough.

Firstly it is James Maybe when he finishes university he will able to devote more time tto racing & especially overseas racing.

So far he rarely races even domestically – only once since London.

I was referring to James Roberts – but it also goes for JM .

If Garcia from Cuba had good stroke mechanics (and good starts & turns) he’d have been miles under 47 already, no question about it. (Legend has it that in his first international 100m free since switching from water polo he did a touch turn and still swam under 51 seconds….)

He has natural talent no doubt. If he can get the technique down, he can be among the best.

The craziest talent I’ve ever seen!!! That guy closes over the last 25m like a freaking freight train!!

USC and Auburn would both be great places for him to hone in on his incredible talents. If he can fix up his starts, turns, and make some changes to his stroke, he could be one of if not the best.

He’s absolutely incredible on top of the water. I’ve not been around top level swimming very much, but I don’t see why his short course success shouldn’t translate to long course. His turnover is insane. It’ll be fun to watch.

C_hanselmann – I’m by no means in the “he’ll never do it long course” camp; the one issue I’d see is that great turnover could be difficult to maintain in long course, where you’re swimming roughly twice the distance on top of the water in a 100 free (give or take). I’m sure over 50 meters no sweat…

Braden, I completely agree that his turnover would be harder to maintain over a 100. I feel like I noticed a decrease in his tempo for the 100; have you noticed? I can’t find video to watch his NCAA 100 again.

I like Vlad, but I also think his height (5’11) will limit him. He will have to work twice as hard just to cover as much pool as his 6’6-6’7 opponents and it will be more about turns and starts, especially for the 100. I’m not saying he can’t do it, but it will be a surprise for me if he breaks 48. in the 50, I think he can fare better.

Height doesn’t matter. My friend is 4’11” and has high school district titles in 100 back. Sure its an advantage but vlad has the speed to counter it. I see him at least at bronze in the sprints

I’m happy for your friend, but in the freestyle at the long course level, height cannot be ignored as a factor that benefits swimmers. Franklin, Agnel, Adrian, Yang, Manaudou just to name a few. If Vlad breaks those barriers, it will be unusual for a swimmer of his height at that distance is all I’m saying.

Like I said its definitely an advantage but I don’t see Adrian, Cesar or agnel going 17.86 50 free. They may not have yards to swim in, but morozov is simply one of the greatest sprinters of the age.

Vlad time was on a relay…
and When Cielo/Adrian were swimming their team was so good they neved had to catch up other guys… If they had the could have broken the 18 seconds barrier..

And vlad may become more like a Lezak (Very Good Swimmer, excels at Relay), but we will have to wait for worlds..

I have no doubt, with proper training, Cielo and Manaudou(Both at their best-injury free), can break 18seconds barrier FLAT START.

All I’m saying is that height isn’t a deciding factor! I’m sure that there are others that can break 18 seconds flat start. I’m sure they could even crush Vlad! I was only commenting on he height issue!

I don’t know where you guys get that he is 5’11. I see it says he is 5’11 on wikipedia but that is not correct, he has to be taller than that. It also says there that he is 73 kgs…He is muscular enough to be heavier than that too. I think he is closer to 80.

definitely some disappointingly slow goal times for long course for a guy who just went 17.8

that was a relay time.. and he got some realism on 50 knowing that SCY and LCM are different..

You’re right – it’s a great strategy for young swimmers to learn from. Unfortunately some coaches believe that goal setting strategy is not important for all of their athletes. Vlad’s club team had goal setting sessions for only part of their senior swimmers. Happy it worked out for Vlad. Personally, I feel that all of the athletes should participate in goal setting – everyone has their own reasons for swimming.

FYI – sub-6′ Vlad just thrashed his competition at NCAA’s and swam the fastest 50SCY split EVER!!! All those dumb tall people stood watching in amazement…

“Make no little plans. They have no magic to stir men’s blood and probably will not themselves be realized”

pretty sure adrian’s first olympics he was a relay only swimmer about the same age as morozov was at last year’s olympics, but obviously historical perspective is lost on this crowd because he was faster than both cielo and adrian ever were in college, without full body suits and you guys hating on him- btw, when you are behind in sprint relays short course, the is no draft, that is called surf!– same guy beat mandaou head to head at short course worlds…. being 6’4 doesn’t hurt you in any course. guy is a racer willing to put it out there, pretty tough for any height

Cielo was already faster on LCM at the same age of Morozov.. and I Think Adrian too… People should stop putting such heat on SCY and focus on LCM