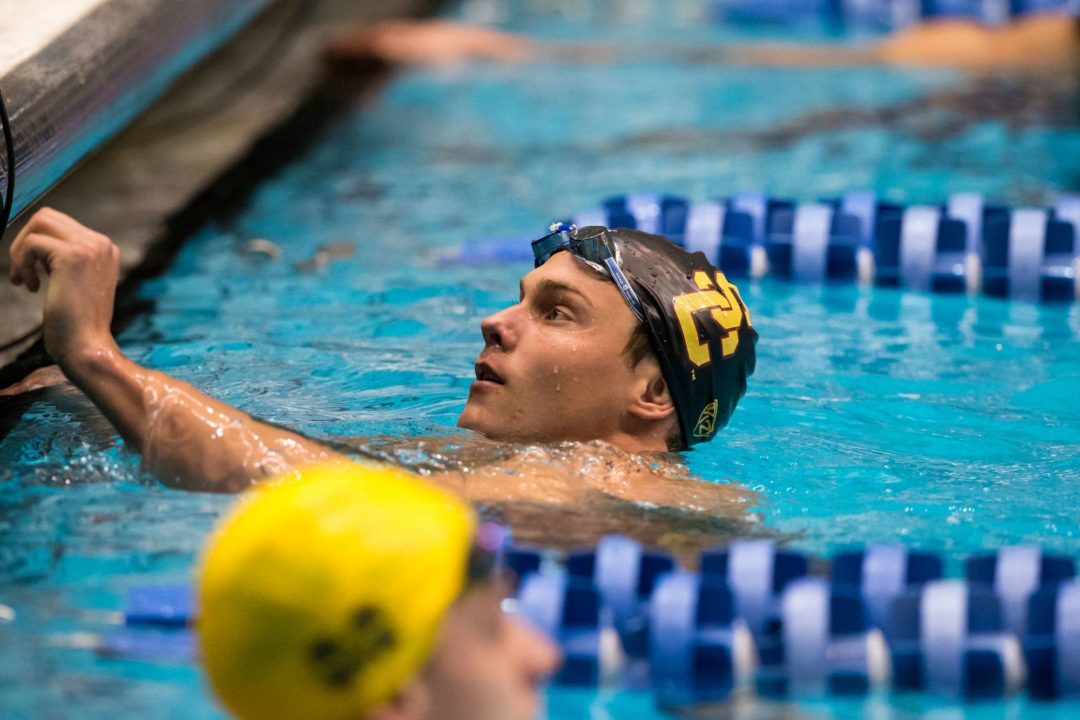 This picture of Vlad Morozov is from after this morning's prelims 50 free. In fairness, Tim Binning only had about 17.86 to get Morozov tonight. Hope he didn't miss....

These are numbers that nobody thought possible.

Polyurethane? Who needs it.

All Vlad Morozov needs is a pool, a block, and some laneropes. And he went a 17.86. That is the fastest relay split in history. This is the first time that anybody has ever split under 18 seconds in a 50 freestyle, in any suit, off of any blocks, at any level.

It’s not even clear if anybody was watching this race, because it appeared that more eyes were focused on the scoreboard waiting for the split. He was a pistol off of the blocks. His arms were flying at the sort of turnover that you only see from 8-year olds at summer league meets. It was unnatural how fast he was spinning, but somehow that ended up with 50 yards in 17 seconds. Great starts and great turns are his specialty.

The previous two fastest relay splits we’ve ever seen both came from Auburn swimmers. At NCAA’s in 2009, Matt Targett split an 18.19 to anchor the Tigers’ winning 200 free relay. The year before, his teammate Cesar Cielo had an identical 18.19 to anchor the 200 medley.

That makes Vlad’s time even more unique in that it was on USC’s third leg.

Auburn got the last laugh in this relay. They took the victory, with USC finishing 2nd. But it will be Morozov whose result is remembered.

I have to disagree with you a little bit, Machine. Having seen it in person, it didn’t look like the image that you might, up until this point only be able to, imagine. His tempo was so fast, if he wasn’t eating up some of the fastest sprinters in the world, he could’ve been mistaken for an age group swimmer who was spinning. His hand speed is so fast it doesn’t look like he’s getting a long catch at all. It’s like an optical illusion. I still can’t process what I just saw. Can’t wait for the flat start.

Agreed. It’s not that he dwarfs his competitors. He just seems to be operating in a different gear. He surfaces already at full speed and you don’t realize what you’re seeing until he flips noticeably ahead of the other swimmers. He also seems to just float higher in the water than everyone else–the old Muhammad Ali descriptor, “floats like a butterfly, stings like a bee,” comes to mind. So much fun to watch. He’s one of those rare swimmers who seems to just be on a different plane than the rest of the division one, ala the Natalie Couglins, Cielo, Ryan Lochte his senior year, etc. His only competition are other handful of professional bests that the world has to… Read more »

Gross. That time doesn’t even make sense. It makes me harken back to 8 and Under 25 yard swims

Come on Braden, are you getting your stats from the Auburn section? Adrian split 18.13 in textile jammers with 0.33 RT, so if he had the same RT as Morozov then that’d equate to 17.83. Also, not to take away from Morozov’s swim but Adrian and Cielo typically led off their relays, and when they anchored weren’t playing catch up. Still, I’m pretty sure we’ll see a 39 later.