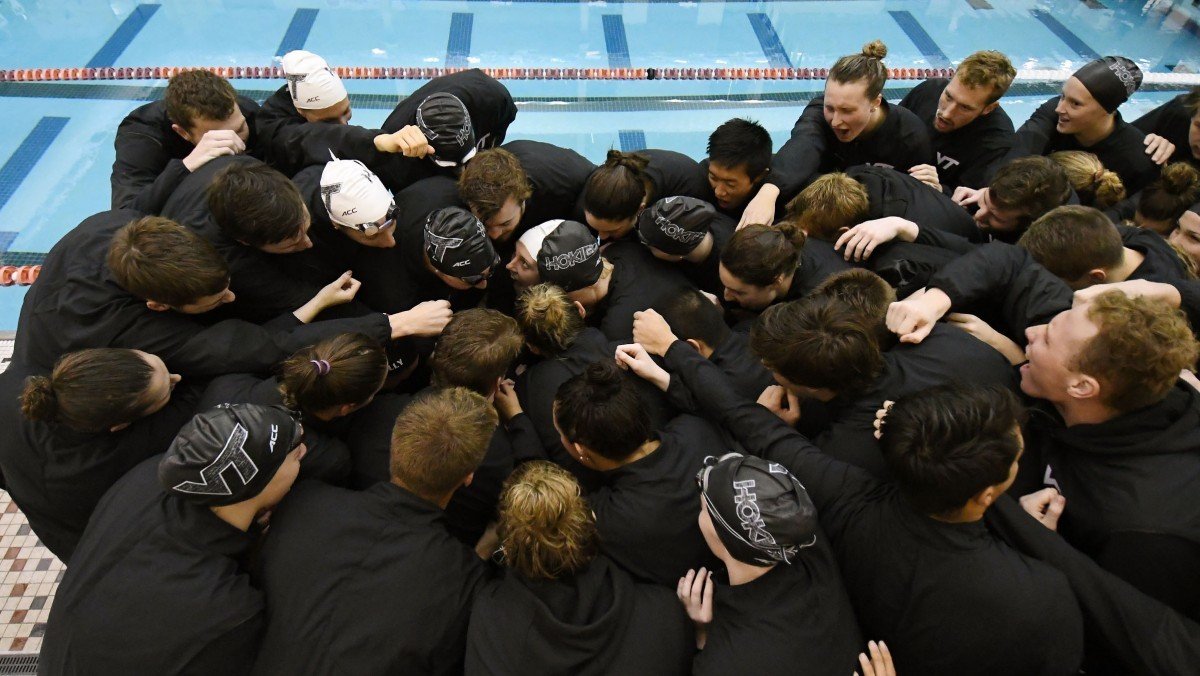 BLACKSBURG – The Virginia Tech men’s and women’s swimming and diving teams will head to Durham, North Carolina to open the 2017-18 season, taking on ACC opponents Duke and Florida State. The meet will kick off tomorrow, Friday, Oct. 13 at 5 p.m.and will conclude Saturday with competition beginning at 10:00 a.m. at Taishoff Aquatics Pavilion.

“We are excited to travel to Duke to square off against some tough ACC opponents,” said head coach Ned Skinner. “Both teams are well coached and hungry to move up within our league. Our swimmers and divers have been working hard through the
summer and into the school year and we are looking forward to watching them compete.”

IN THE RANKINGS
The competition features a tough slate with four ranked teams. The Hokies enter the weekend with the men’s swimming and diving team ranked 19th in the College Swimming & Diving Coaches Association of America preseason poll while the women’s team is receiving votes. The Florida State men have also secured a spot at No. 20 while the women are at No. 23. The Duke women enter at No. 20 as well.

On the women’s side, 25 student-athletes return to a team that finished in the top-5 at the ACC Championships. This includes All-Americans Ashlynn Peters, Reka Gyorgy and Klaudia Nazieblo. The three are also joined by Maggie Gruber, Adriana Grabski, Jenna Beattie, Grace Kowal, Chloe Hicks, Kelly Henry, Danielle Griggs, Sydney Pesetti and Ashley Buchter. In additio! n to the All-Americans, Grabski, Hicks, Henry and Buchter competed at the 2017 NCAA Swimming National Championships.

“We have nearly 15 swimmers and divers competing for the the first time and a strong crop of seniors commencing their last time through a season,” said Skinner. “We have so many fine student-athletes on our team and we know they will give us all they have and represent us the right way.”

“Looking forward to this kickoff to the ACC season,” added diving coach Ron Piemonte. “Duke and Florida State are two very strong diving schools, so it will be a good test to see where we are at the beginning of the season. I am excited to be competing as a whole team (both swimming and diving) and to start getting the ball rolling as a program. It is always a great environment for our swimmers and divers to feed off each other, and strengthen the “All Together” component of the teams – both men and women.”

THE SEMINOLES
Florida State will take on its first ACC competition this weekend after splitting a hard fought battle with Minnesota at home last weekend. The men are currently 1-0 on the season after picking up a 179-121 decision behind a strong showing on the boards, outscoring No. 21 Minnesota, 31-7. The Seminoles’ women are 0-1 after falling in a close meet (153.5-146.5) to the No. 17 Gophers. FSU returns 14 NCAA qualifiers from the previous season. The men’s team finished fifth last season at ACCs while the women were seventh.

VENUE INFORMATION
All doors to Taishoff Aquatic Pavilion will open 60 minutes prior to the start of the meet. There are entrance doors to the seating area located at the west sides of the pavilion.

The accessible entrance to Taishoff Aquatic Pavilion is at the main entrance to Wilson Recreation Center. Guests should speak to the front desk attendant for access. Once inside the Wilson Center, guests will turn left and follow the hallway toward the basketball courts to reach the elevator. Guests should take the elevator to the second (2nd) floor and enter the pavilion through the cardio area.

Up Next: After returning from North Carolina, the H2Okies will holds their first home meet against VMI, Queens and Liberty (women) on Friday, Oct. 20 beginning at 4 p.m.