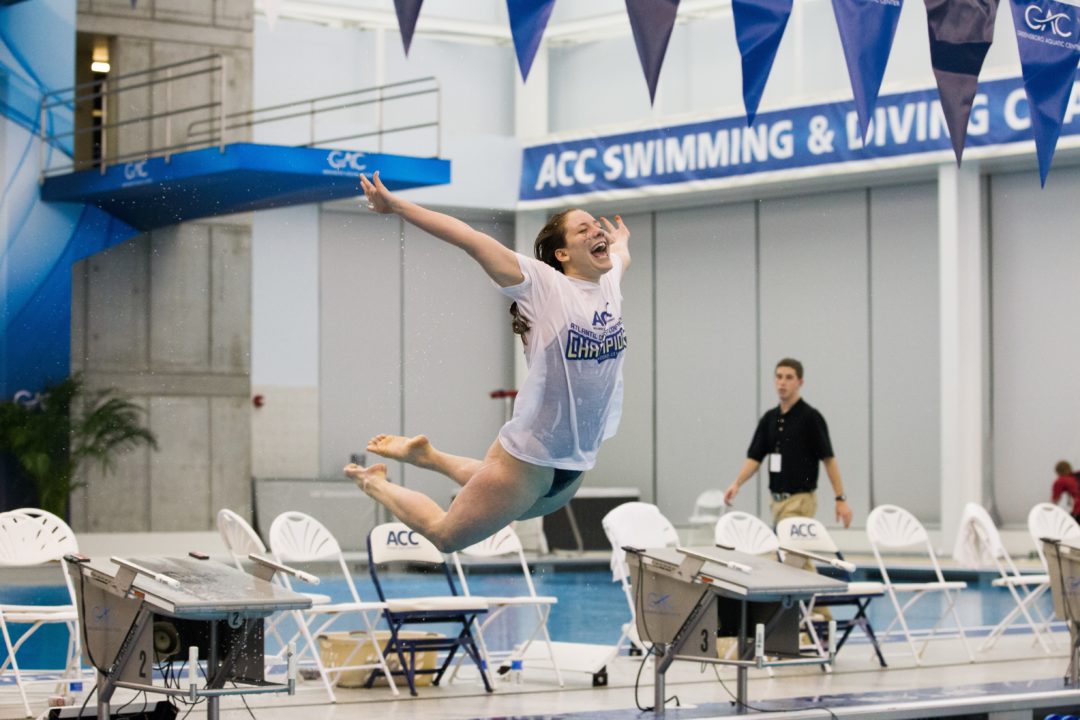 Sarah White, an NCAA All-American and ACC Champion, has left the team at the University of Virginia, and for now has ended her swimming career.

As a freshman in 2012, White was the ACC Champion in the 200 IM, NCAA qualifier, a member to the national junior team as well as a semi finalist at the most resent Olympic trials. Last season in 2013 she was an NCAA All-American in the 200 fly, finishing 16th at the championships. White was also an Olympic Trials semi-finalist in 2012 in the 200 IM, winding up placing 15th in Omaha.

She was also awarded the team’s “Hardest Worker” and “Heart of the Team” awards in each of her first two years with the Cavaliers.

White said that she didn’t expect to be done with her colligate career after two years.

“I’ve always had a love for swimming, but I have never let it be my only outlet,” the Norfolk native explains. “My mom is an artist, and so I’ve grown up around art my whole life.”

But certain circumstances changed over the summer.

“I feel good about leaving my career here. I accomplished everything that I wanted to accomplish in the sport, I just did it a lot sooner than I thought I would.”

White had a very close relationship with former head coach Mark Bernadino. “After Mark left this summer, I stayed active, but I knew I was going to have to work hard to get back into training shape fall,” White said.

“When I got to campus this fall, with the new coaching staff, things had changed for me. With Mark leaving and how close we were and still are…I was as surprised as anybody, but I haven’t been in the water in a month, and I haven’t missed it.”

White has recently decided to add a second focus to her degree plan, and will now double major in Sociology and studio art with a focus on sculpture and painting.

“I love Virginia, and I intend to see out my education here,” White said. “I wish nothing but the best to the group of my former teammates and my forever family.”

damn that sucks for Virginia

From what I’ve read about this young lady, I’d say swimming just lost a bright star in many regards. Bravo to Sarah for her many successes both in the water and on deck as a teammate, but especially bravo for such mature composure in what must have been a very tough decision. Gotta love the photo…it more than aptly illustrates Sarah’s ability to be the “heart of the team.”

Good for Sarah for showing maturity and knowing herself. I think far too many athletes keep participating long after they stop enjoying it and end up making themselves (and many times their teammates) miserable. The last thing a team needs is someone whose whole heart isn’t in it. Being able to give up the glamour of being an athlete on campus and all of the perks because you know what’s best for you in the long run shows a high level of maturity. Best of luck to you Sarah!