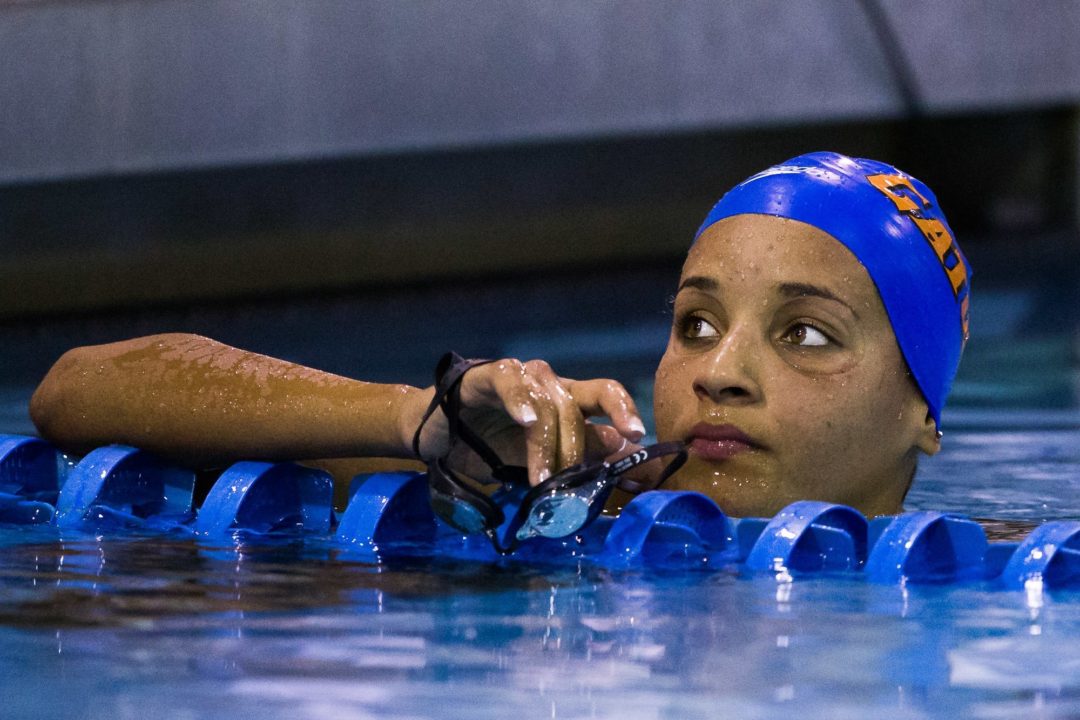 Andreina Pinto of Venezuela snagged a FINA A cut in the women's 400m freestyle tonight to go with her 200m freestyle mark from yesterday at the South American Championships. Archive photo via Tim Binning/TheSwimPictures.com

The South American Championships continued in Paraguay today, after an undeniable siege on National Records took place during yesterday’s finals session. At the end of tonight’s exciting events, Brazil remains at the top of the overall medal count with a huge total of 18, composed of 8 gold, 5 silver and 5 bronze. The next closest nation through 2 days of competition is Argentina at just 3 behind, snagging a total of 15 medals broken into 7 gold, 4 silver and 4 bronze.

Argentina’s Andrea Berrino, who earned silver in the 100m backstroke yesterday in a new National Record, doubled up with her hardware today by earning the gold in the 200m version of the stroke. Berrino roared to the wall in a mark of 2:13.47, swift enough to score a new meet record and beat the field by over a second. Splitting 1:04.67/1:08.80 the 22-year-old came very close to breaking her own National Record of 2:13.39 she’s held since 2014.

Venezuelan star Andreina Pinto struck gold in the women’s 400m freestyle tonight, stopping the clock at a speed 4:07.17 to represent the only sub-4:10 competitor of the field.  Pinto bagged a new meet record for her effort in the race tonight and her time now ranks as the 14th-fastest in the world this season.  The women’s 400m freestyle FINA A cut sits at a 4.09.08, so Pinto very easily dipped beneath that mark with her performance tonight, adding a 400 free Rio-qualifying time to her 200m freestyle performance from yesterday.

Uruguay earned its first medal of the championships in the form of Martin Melconian, who touched just .4 behind Brazilian winner Raphael De Oliveira in the men’s 50m breaststroke. De Oliveira registered a mark of 27.97 for the gold, while Melconian finished in 28.01 for silver, enough to lower his own National Record and place himself on the podium.

30-year-old Luis Altamir Melo scored the men’s 400m freestyle victory, clocking a time of 3:51.33 to top his younger competitors. In the process, Melo lowered his own meet record of  3:52.46 held since 2014. Following less than a second behind was Argentina’s Martin Naidich in 3:52.23, followed by Venezuela’s Cristian Quintero who finished in 3:52.24 for bronze. All of tonight’s times sit outside of the world rankings’ top 25 times, and also don’t surpass the Olympic automatic-qualifying time of 3:50.44.

Pinto will final in Rio.

That is the south american spring …