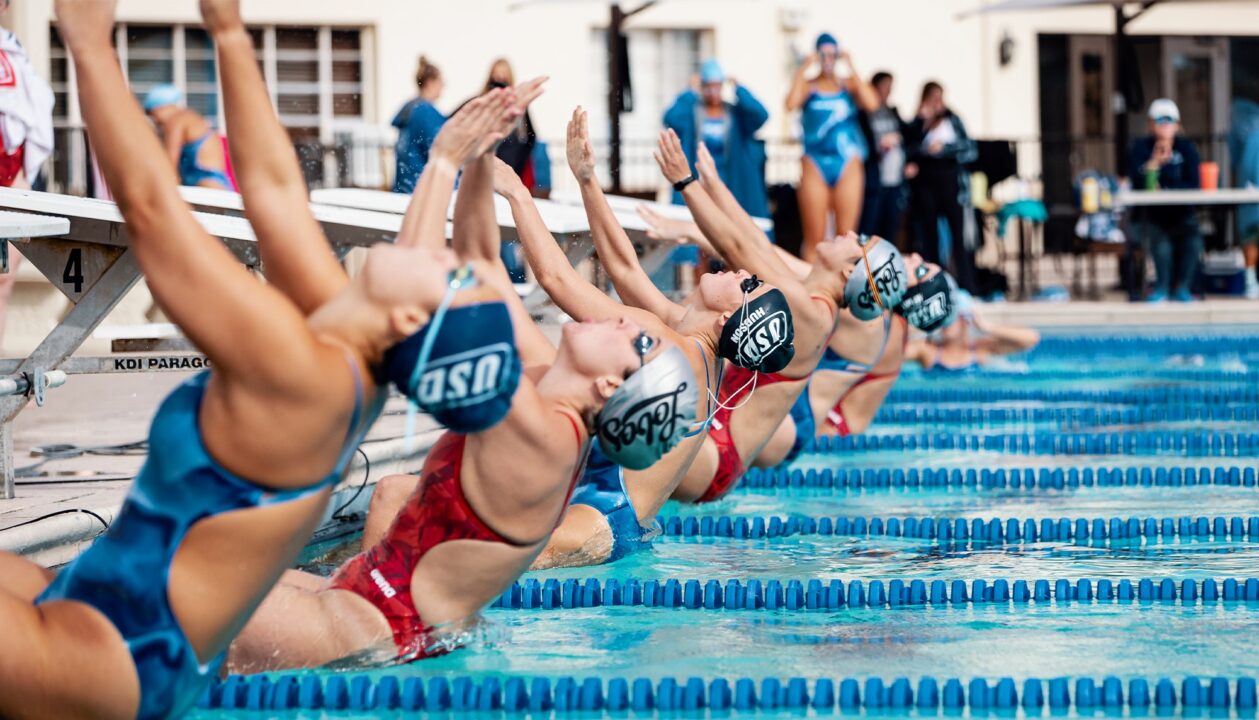 USD celebrated its seniors during the WCC Cup, when they also won against LMU and Pepperdine. All three teams compete next week. Current photo via USD Athletics

SAN DIEGO — USD swimming and diving enjoyed a strong showing as it hosted the USD Invite this past weekend, taking down both LMU and Pepperdine across the two day event.

Kate Peterson turned in a season-best performance in the 100 Yard Free, finishing with a time of 53.08 to take first place.

Jane Riehs turned in a dynamic performance of her own, scoring 286.80 to win the 3 Meter Dive event.

USD finished strong in its final event of the weekend, with Kate Peterson, Hannah Hudson, Rachel Hubka, and Alexa Phillips placing first in the 200 Yard Free Relay after recording a time of 1:37.97.

The Toreros are back in action on Friday, January 28 as they take on San Diego State.

SAN DIEGO, CA – The Loyola Marymount University Lions women’s swimming team traveled to San Diego over the weekend for two days of competition against the University of San Diego and Pepperdine.  The Lion’s last competed in mid-November at the Winter Invitational at East LA College, where they posted season-best times before heading into finals week and the holiday break. A scheduled competition on January 2 against UCSD and CSUB was canceled due to health and safety protocols within the Triton program.

Although a bit rusty from the hiatus from competitions, the Lions had some strong swims ove the weekend. Freshman Ashley Leaman pick-up where she left off, leading the Lion scorers placing fifth in the 100 butterfly on Friday and third in the 100 freestyle on Saturday. Junior Kelli Andrade also scored well in both the 100 breaststroke and 200 breaststroke placing sixth and fourth respectfully. Abby Shaw also was in the mix of the top sprinters, placing in sixth in the 50 freestyle on Friday and fifth on Saturday. Other Lions that placed in the top six during the competition included Anna Doherty placing third in the 1000 freestyle, Lily Gallagher placing fourth in the 200 freestyle, Heidi Ly placing sixth in both the 200 Individual Medley and 100 backstroke and Holly Prince placing fifth in the 1650.

The Lions travel up to Fairbanks, Alaska next weekend for another two-days of competition against conference rival University of Alaska Fairbanks before their final home meet at the Burns Pool against Azusa Pacific on February 5. The Lions 2021-22 season will conclude at the Pacific Collegiate Swim Conference Championship, February 16-19 in St. George, Utah on the campus of Dixie State University.

SAN DIEGO, California – The Pepperdine women’s swim and dive team carried momentum from Friday’s meet over into Saturday’s, with Olivia Kayye and Emily Morton winning events on the second day of the WCC Cup for the Waves.

In the 200-yard back after Morton took first, Kara Coughlin (Evergreen, Colo./Evergreen HS) placed second to give the Waves the top two spots on the leaderboard in that event. She came in with a 2:08.51 time.

In the diving portion, Paulina Holmberg (Apple Valley, Minn./ Academy of Holy Angels) took third in the three meter with a score of 239.63. Lexie Martin (Keller, Texas/Keller HS) placed fourth with a combined score of 223.28.

Head Coach Ellie Monobe said: “After a solid Friday of racing and diving, we followed it up with another strong day of competition. Olivia Kayye took the first win with the 1000 (free) after stepping up on the A relay moments before. Additionally, Emily Morton and Kara Coughlin going 1-2 in the 200 back was another highlight of the day.

“I think we are tired and due for some much-needed rest before we wrap up the 2022 season, but our details are on point which will make a big difference come time for the conference meet.”

NEXT UP: Pepperdine will be back in action next Saturday, January 29 with the final dual meet of the season against Azusa Pacific, with diving beginning at 10:00 a.m. As the final home meet for the Waves, eight seniors will be recognized as well. Visit pepperdinewaves.com/tickets for more information. While tickets are free, obtaining an e-ticket is necessary to gaining access to campus for the event.