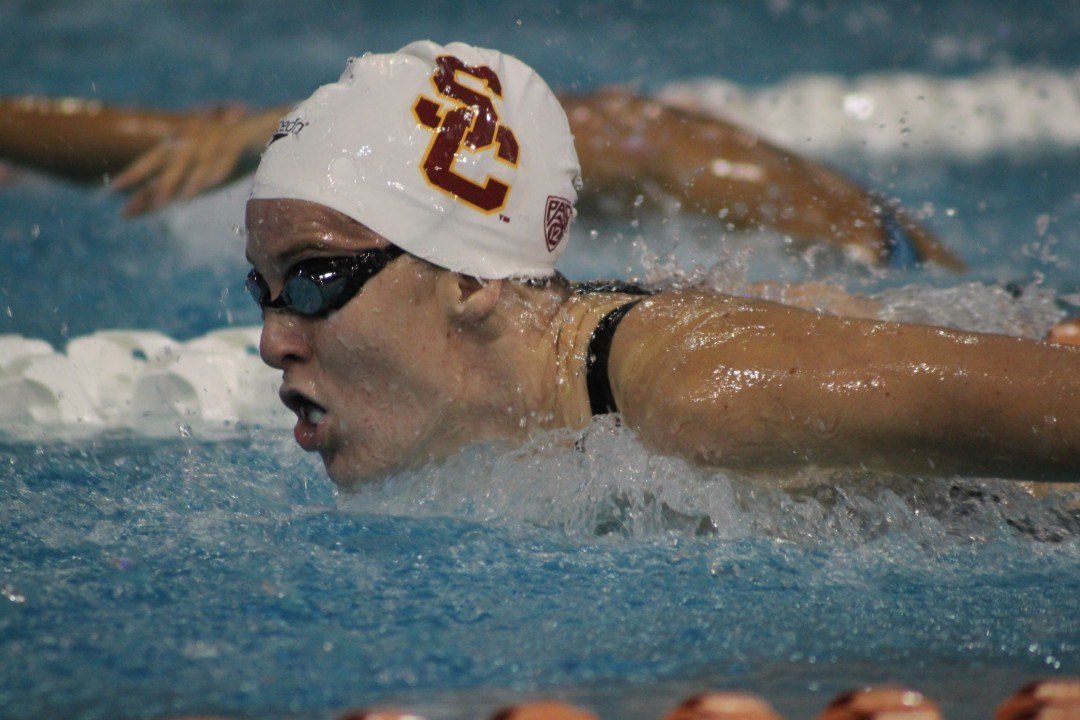 The USC's Trojans, led by senior Kendyl Stewart, have announced there schedule for the 2015-2016 season. Archive photo via Andy Ringgold/Aringo Photography

Los Angeles, California – Along with their men’s team, The University of Southern California women’s swimming and diving team has announced their schedule for the 2015-2016 college swim season, also announcing that they will only being hosting eight meets this season and one diving invitational, starting with the Cardinal and Gold Intrasquad meet (Sep. 11).

The Trojans’ first meet of the season was the Cardinal and Gold Intrasquand meet, which was held at the Uytengsu Aquatics Center. On October 3rd, they will make their way to Salt Lake City, Utah to compete against Utah, which will be their first dual meet against another Pac-12 team. After, they will head back home to compete against North Carolina State and Hawai’i (Oct. 16-17), Oregon State (Oct. 23), and in the USC Invite along with the Alumni relays (Oct. 24) at the Uytengsu Aquatics Center.

In November, the Trojans’ will be swimming back-to-back meets against Arizona State (Nov. 6) in Tempe, Arizona and University of Arizona (Nov. 7) in Tucson, Arizona. After completing these meets, they will be on their way to East L.A. College where they will be swimming in the three-day Arena Invitational (Nov. 13-15).

As Fall semester comes to an end, the team will be competing in only two invitations in December, the Texas Invitational in Austin, Texas (Dec. 2-5) and at U.S. Nationals in Federal Way, Washington (Dec. 3-5).

The Trojans’ will start off the new year and new semester with three home meets, and the toughest run of their regular-season schedule, against Wisconsin (Jan. 12), California (Jan. 29), and Stanford (Jan. 30). They will then swim against UCLA (Feb. 12) in Westwood, California, finishing off their final dual meet of the season before heading the Pac-12 Swimming Championships.

The Trojans’ dive team will be competing in the Trojan Diving Invitation at the Uytengsu Aquatics Center (Nov.13-15).