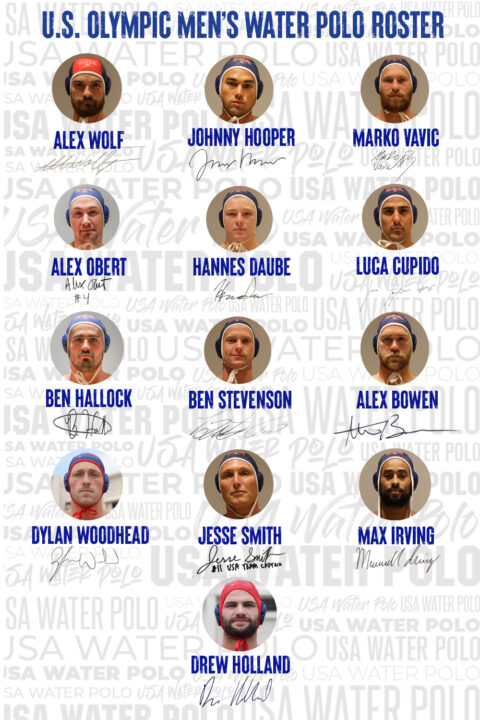 Final approval of the selections is required by the U.S. Olympic & Paralympic Committee and will be announced at a later date. Current photo via USA Water Polo

Croatia won a thriller against defending champion Hungary to claim its second European Championships title in the nation’s history.

Host Croatia beat Italy to reach the final for the first time since 2010 – that had happened on home soil in Zagreb and now again, in Split.

Irvine, CA – July 2, 2021 – U.S. Olympic Men’s Water Polo Team Head Coach Dejan Udovicic has announced the 13 athletes that will be nominated to represent Team USA at the upcoming Olympic Games Tokyo 2020, following a silver medal run at the FINA World League Super Final in Tbilisi, Georgia. Team USA punched their ticket to Tokyo with a gold medal finish at the 2019 Pan American Games in Lima, Peru. Final approval of the selections is required by the U.S. Olympic & Paralympic Committee and will be announced at a later date.

A 2008 Olympic Silver Medalist, Smith ties the record of retired Team USA great Tony Azevedo for most Olympic Teams ever made by a USA Water Polo athlete. A world-class defender, Smith brings years of experience at the national team and international club level. Bowen has spent the last five years honing his skills abroad capping up for clubs in Hungary, Croatia and Greece bringing a next level offensive game.

Hallock and Obert have evolved into the main options for Team USA at two-meters and both are coming off strong international campaigns. Hallock, a NCAA champion, took home the ultimate club title this year as the first American man to win Champions League, taking top honors with Pro Recco. Obert also advanced to the Champions League Final 8 with Croatian power VK JUG. A physical force in front of the cage, Obert brings important size up front. Cupido rounds out the returners as one of Team USA’s best scoring threats. A knack for clutch goals, he’ll be counted on to find the back of the net regularly and spent time playing club ball in Italy earlier this year.

Eight newcomers join Team USA in Tokyo and while it may be their first Olympics, they have no shortage of experience. Max Irving and Hannes Daube were teammates for Olympiacos this season, reaching the Champions League Final 8 and will be two big pieces of the Team USA attack. There will be a brand-new look in goal for the United States in the Olympic Games as Alex Wolf and Drew Holland take on goalkeeper responsibilities. Both competed with clubs in Greece this season and have the ability to catch fire in the cage. Holland was most recently named the best goalkeeper at the 2021 FINA World League Super Final.

Johnny Hooper heads to his first Olympic Games adding a creative element on offense while Marko Vavic has the versatility to make an impact on both ends of the pool. Both spent time abroad with Hooper competing in Greece and Vavic in Italy. Dylan Woodhead, fresh off club play in Greece, adds to the defensive rotation and with one less roster spot on gamedays, lockdown defenders will be key to advancing. Nevada native Ben Stevenson rounds out the roster bringing another hard-working attacker with a host of international club experience in recent years, most recently with Glyfada where he was on the same team as Woodhead.

The USA Men’s National Team is coming off a silver medal at the FINA World League Super Final, earning their third second place finish at the event in program history. All silver medals at the Super Final have come in Olympic years, with the prior results in 2008 and 2016. In 2008 the team would go on to win the silver medal at the Olympic Games in Beijing, the program’s most recent Olympic medal.

19 athletes in the USA Men’s National Team program trained or competed with professional clubs in Europe, a record for Team USA. Learn more about which athletes played where by clicking here.

Under a new format for the upcoming Olympic Games Tokyo 2020, each nation will declare 12 active players before each match of the competition. The reduction in gameday roster size from 13 to 12 was part of an expansion in the overall number of teams competing in the women’s tournament. The size of the women’s tournament is now at 10 countries, up from eight, while the men’s tournament stays at 12 teams.

Quotes
“I’m excited today to be able to announce the 13 player roster for the Olympic Games in Tokyo. We had 19 players who played overseas, (a) long period the last six to eight weeks, (including) common practices with European teams. I’m pleased and I’m very excited looking forward to Tokyo. The guys put in very hard work, and work ethic was always (at a) high level. It’s a tough decision, not an easy decision, my message to the players who were not selected – they are going to be always part of this family and our success will also be their success. Go USA!” Dejan Udovicic, Head Coach, U.S. Olympic Men’s Water Polo Team

“I’ve been working really hard since I was about nine years old trying to make this dream come true, and for it to finally become a reality, it feels really good. Obviously there is more to come and more goals to reach but right now this is a big accomplishment and a check off my bucket list.” – Hannes Daube, First-Time Olympic Nominee

“Being named to my second Olympic Games is incredible, it’s been a long journey since 2016. (It’s) a completely new group of guys and the work we’ve put in has been awesome, I can’t wait to get to Tokyo. I think the team has come together really nicely and we’re ready to fight for each other in Tokyo.” – Ben Hallock, 2016 Olympian and Tokyo Olympic Games Nominee

https://www.txwaterpolo.com/2019/11/11/socal-vanguard-win-8th-grade-gold-in-houston/ Some interesting development in youth water polo in Texas. Texas teams working with elite Olympians from California, so the sport might be more competitive between California and Texas teams in the future. Also, Brenda Villa, has helped the sport to be more Latino since Southern California, Santa Ana and Vanguard, Huntington Beach did better in a youth tournament.