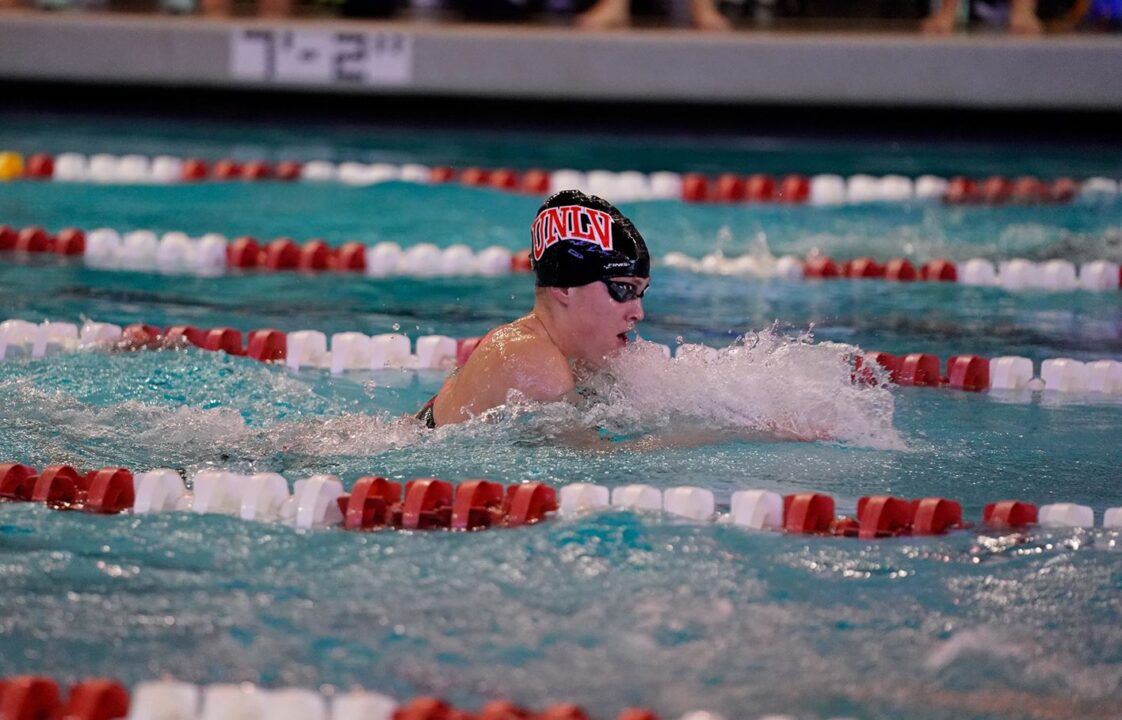 After combining to win 23 events, the UNLV men and women pulled off the dual sweep of UC Santa Barbara by scores of 150-107 and 171-86, respectively. Current photo via Lucas Peltier

SANTA BARBARA, Calif. (UNLVRebels.com) – After combining to win 23 events, the UNLV men’s and women’s swimming teams pulled off the dual sweep of UC Santa Barbara by scores of 150-107 and 171-86, respectively, Saturday at Campus Pool. This marked the Rebel women’s first win over UCSB since the 2018-19 season and men’s first triumph over the Gauchos since 2012-13 in dual competition.

REBELS OF THE MEET:

THE RUNDOWN – MEN:
*Sophomore George Ratiu (20.88) and junior Steven Butler (45.83) matched their women counterparts with a sweep of the sprints. The former placed first in the 50 free while the latter won the 100 free.
*Butler’s 100 free win paved the way for UNLV’s sweep of the top-3 spots, which also featured a second-place finish by Ratiu (45.90) and third-place finish by senior Richard Szilagyi (46.09).
*Their momentum carried over into Mykannen’s 200 free and 500 free wins that led a string of three more top-5 Rebel finishes. Freshman Andrew Navarro placed second (4:34.10) and junior Cam Castro fourth (4:38.10)  in the 500 free while senior Bryan Chavez’s 200 free time of 1:39.59 landed him in third.
*Completing the distance event sweep, Castro’s first-place swim in the 1000 free came on a time of 9:22.48. Sophomore Cooper Kiel (10:03.06) gave the Rebels additional scoring in the event with his fifth-place finish.
*Senior Ivan Zhukau joined Beji with his matching finishes in the breaststroke events as he trailed close behind his Scarlet and Gray teammate in second place in the 100 breast (57.88) and 200 breast (2:04.13). Senior Jack Binder added to the scoring in those events with a fifth-place time of 58.43 in the 100 breast.
*In the 100 fly, Chavez sped his way to another UNLV first-place finish with a time of 49.88. Chavez’s senior counterparts Michal Cukanow (50.32) and Michael Klauss (50.88) provided more points in the 100 fly with their respective third-place and fifth-place finishes.
*Moving to the 200 fly, Klauss paced all Rebels in second while Navarro (1:51.48) tagged in third and Mickelson (1:52.18) in fourth.
*The Rebel men’s squad received additional points in the sprints and backstrokes behind senior Reece Hemmen’s (21.24) fourth-place finish in the 50 free, Szilagyi’s (51.56) fifth-place finish in the 100 back and Mickelson’s (1:50.31) third-place finish in the 200 back.
*UNLV’s ‘A’ team of Bolanos, Beji, senior Casey McEuen and Butler sent the Rebels out on a high note with their 200 medley relay victory (1:30.93).

QUOTABLE: “UCSB is our oldest rival, so it’s always nice to get the ‘W’ against them. But we need to race with better consistency. Many of these performances are much slower than we went in the Fall dual meets, and that can’t happen. In the end, we stepped up well in relays and distance events. Our sprinting was hit and miss, but that opened the door for some student-athletes like Steven [Butler] and Ava [Haase] in the 100 free to lead the way. Overall on the women’s side, our seniors were really good today and I appreciate their leadership in the pool. For the men, our depth played really well today. UCSB’s men’s squad is talented and in the few instances where they got a win, our guys did a nice job of neutralizing it by scoring a lot of points in the second through fifth range.” -Head Coach Ben Loorz

NEXT UP: The Rebels’ men’s and women’s diving teams will look to ride the wave of their swimmer counterparts’ success next weekend when they head to Los Angeles for UCLA’s Bruin Invitational being held Friday (Jan. 14) through Sunday (Jan. 16).

SANTA BARBARA, Calif. – The UC Santa Barbara men’s and women’s swimming teams both suffered losses against UNLV in their home-opening meet Saturday morning. The men’s final was 150-107 and the women were defeated 171-86 in what was the first meet at Campus Pool since February of 2020.

In addition to Brill and Falcon taking the top two spots in the 200 IM, the Gauchos also had three of the top four finishes in the 1000 Free and 100 Back. The relay team of Driscoll, Brill, Lee, and Justin Wong placed third in the 200 Medley Relay, touching in 1:31.86.

The women’s relay team of Kristin Bartlett, Empremsilapa, Seggelke, and Marriott Hoffmann took the number three spot in the 200 Medley Relay, finishing in 1:47.19.

The Gauchos look to bounce back against Cal Baptist next Saturday. The meet begins at 12:00pm at Campus Pool.