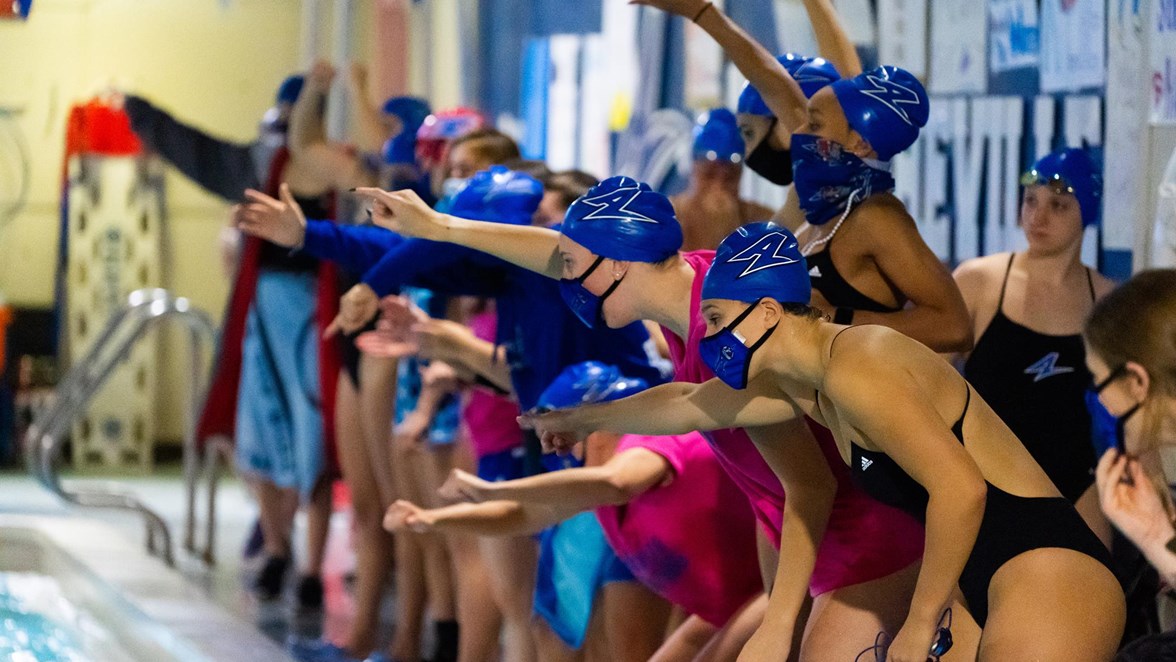 UNC Asheville picked up a pair of historic program firsts, and are now 13-1-1 in their last 15 dual meets, dating back to November 2019. Archive photo via UNC Asheville Athletics

UNC Asheville vs. Campbell vs. UNC Wilmington (Women Only)

The Bulldogs of UNC Asheville continued their torrential start to the 2021-2022 season with wins over in-state rivals UNC Wilmington and Campbell University. Campbell hosted the swimming competition, while UNCW hosted the diving competition.

The victories move the team to 5-0 to open this season, and 13-1-1 in their last 15 dual meets, dating back to November 2019. Furthermore, the wins marked the program’s first-ever victories over either Campbell or UNC Wilmington.

UNCA has now beaten East Carolina, Gardner-Webb, Bellarmine, Campbell, and UNC Wilmington by an average margin of 70 points this season.

UNC Asheville won 8 out of 14 swimming events on the day, including a sprint sweep by junior Delaney Carlton. She won the 50 free in 23.66, making her the only swimmer under 24 seconds, and then after the diving break came back to win the 100 free in 52.18, by just a tenth over Campbell senior Annie Sanchez.

While that is Carleton’s slowest 100 free time of the season so far, it is her fastest 50 free swim by two tenths of a second. It also ranks her 2nd in the CCSA conference this season.

Also picking up a sweep for the Bulldogs was breaststroker Mikaela Fullerton. She won the 100 breast in 1:06.27, winning by a second-and-a-half, and the 200 breast in 2:25.72, winning by just .02 seconds ahead of UNCW’s Hannah Owings. A flip of that narrow result would have flipped the total team result too.

“We went up against some great competition today, but this is what we’ve trained for all season, and it paid off,” said Mikaela Fullerton afterward. “With the support of our teammates and our own strengths, we took first against both teams. I’m so proud to be a part of this team!”

UNC Wilmington picked up 5 victories in the meet, including a sweep of diving events. The swimming victories were all taken by freshmen, highlighting the bump in recruiting that the program has received under new head coach Bobby Guntoro, who built a reputation as the sprint coach at NC State.

Molly Braun swept the butterfly events for UNCW in 57.91 and 2:06.61. Those wins came in the absence of the team’s top butterflier, Reece Alexander, another freshman, who swam the 200 and 500 freestyles on Saturday instead.

Another UNCW newcomer Katie Knorr touched first in the 200 IM, winning in a season-best 2:08.91. That’s 1.7 seconds better than she swam in her team’s last outing 3 weeks ago against Tennessee.

UNCW also dominated the diving events. Courtney Klausen, the defending CAA Conference Diver of the Year, swept the springboard events, including a new career-best score of 301.13 on 3-meter. That made her the second Seahawk ever to clear 300 points.

While it didn’t score many points for her team, Asheville freshman Morgan Coughlen set a new school record on 3-meter with a six-dive point total of 218.25.

While Campbell fell to UNCA by a much larger margin, when scored head-to-head against UNC Wilmington, Campbell actually came away with the victory for a 1-1 split.

Their top performance came from Annie Sanchez early in the day in the 200 free, where she won in 1:53.75. That was a season best for her by nearly a full second. She’s the school record holder in the 200 free with a 1:51.02 that placed 4th at last year’s CCSA Championship meet.

One event later, Julia Sherlock won again for Campbell, topping the 100 back in a season-best of 58.11.

With the team battle still in the air, UNC Asheville finished 2nd overall in that race in 3:30.41, but got the head-to-head win over UNCW (3:30.51) to seal the meet win in come-from-behind fashion.

Campbell races next Saturday, October 30, against Gardner-Webb and Old Dominion at home; UNCW is lined up for a two-day double dual against Duke and Boston College in Durham next weekend; and asheville will host another CCSA opponent Georgia Southern next weekend.

Yes, great at recruiting. Must be nice to have such a great reputation and be able to out recruit any midmajor team in the country by name alone

Why is it that whenever a mid major program gets attention on Swimswam the swimmers or parents or whoever almost seem…mad about it? It’s a very weird phenomenon that I’ve noticed several times throughout the years.

Oh man. You should have been around during the collegeswimming.com message board days XD

wish they would bring those back, they were great

Great article. UNC asheville is no longer an up and coming team. they are a strong opponent to others in and out of their conference. Next time maybe focus more on the strengths of the performances of the Asheville swimmers & divers more than that of the weaknesses of the other opponents.

Lol. Act like you’ve won a meet before and don’t make up perceived slights. Y’all want the attention, you’ve gotta live with criticism. Sorry but winning a D1 dual meet with a 5:10 in the 500 free is just not going to impress anybody.

Why are you so pressed? Like you really wrote a paragraph for what

It seems like when unca gets/ deserves the same positive attention from swimswam as uncw does, someone has to pitch a fit. They won the meet with the 5:10 in the 500 and a 23.6 in the 50. Those are extremely reasonable times, especially because all three teams are going through their toughest training this season so far. All three teams did very well, the comment isn’t saying that they didn’t but obviously the team that won should garner more positive attention.

I’m impressed that UNCA raced to win races for their team instead of being fixated on individual times at an in season meet. Seems like those times are just smart execution to win over worthy competition given the tight turn-around of the 50-100 free and/or doubling the 1000 and 500.

Okay but then why y’all fighting with everyone in the comments lulz?

Lulz I can’t actually tell what Anonymous is mad about, but he sure is mad about something.

So are we just going forget about UNCA freshman Caitlin Hefner winning both distance free events?

If UNCW had “beaten” UNC-Ash in the dual with a slight tweak in the scores to not disrupt the other matchups, a triangular 1-1 outcome would have been kind of cool. Has that ever happened before?

Really would’ve just taken another tenth on the 400 free relay by UNCW and it would’ve happened.

Ever? Probably. I have no idea how to figure out how many times though lol. It was surprising to me though that it happened this meet when the respective scores against UNCA were so disparate.