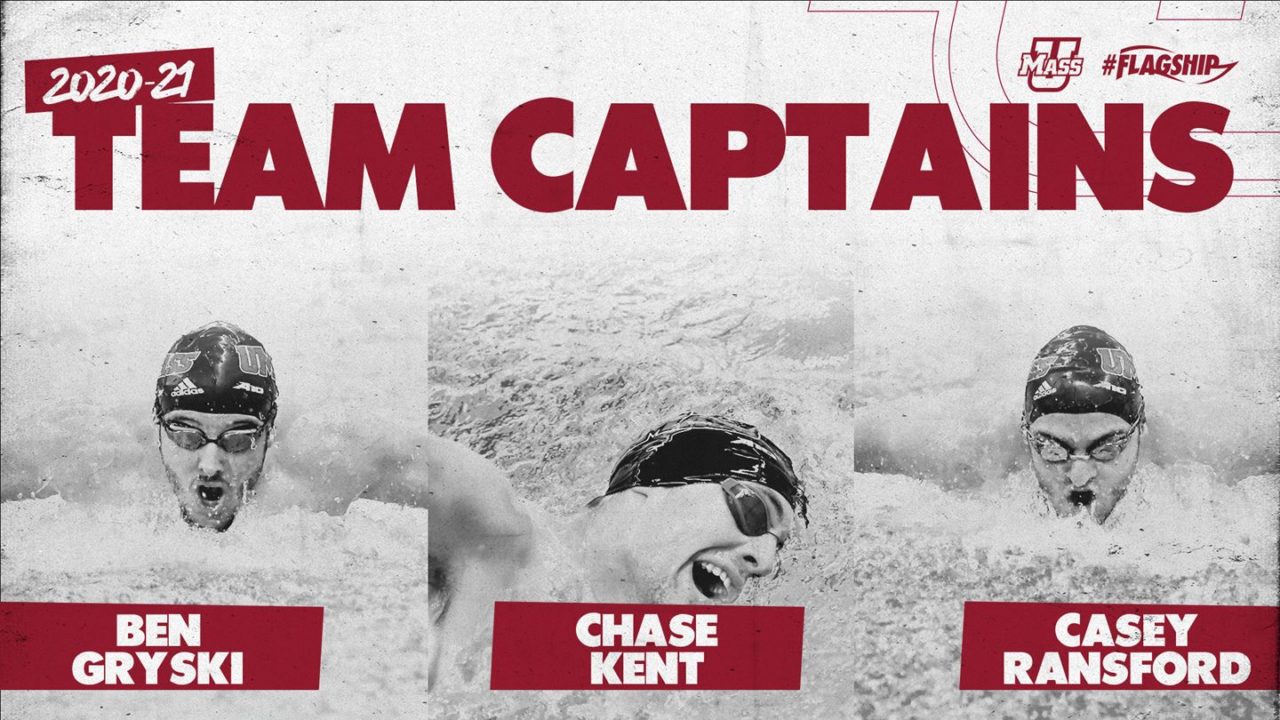 Ben Gryski, Chase Kent and Casey Ransford were voted as the team captains for next season. Current photo via UMass Athletics

AMHERST, Mass. – The University of Massachusetts men’s swimming and diving team announced their team captains for next season in addition to their team awards on Wednesday afternoon. Ben Gryski, Chase Kent and Casey Ransford were voted into the role by their teammates and coaches.

Ransford (Pittsford, N.Y.) was also named the team’s MVP after leading the Minutemen in points scored at the Atlantic 10 Championships in February. The Atlantic 10 All-Academic selection was a two-event finalist at the league meet, breaking his own program record in the 200 Fly to finish fourth while taking fifth in the 100 Fly.

Noah Witt (Lamont, Pa.) earned the team’s Rookie of the Year honor as he finished the season with the top 200 Backstroke time on the team with a swim of 1:46.50 on his way to a fifth-place finish at the league meet. Witt’s time also ranks fourth-fastest all-time at UMass.

Luther Gordon (Clifton Park, N.Y.) was tabbed as the Minuteman Award winner for the third consecutive year as someone who exemplifies the team’s culture and spirit. The two-year team captain and two-time A-10 All-Academic selection combined leadership, effort and great attitude daily to inspire his teammates to perform at a higher level.

Colby Vieira (Wrentham, Mass.) dropped over a minute in his 1650 Freestyle time on his way to earning the Most Improved honors. Vieira improved his 1650 Free time to 16:09.08 to rank inside the top-20 fastest in the UMass record book. Charlie Rothenberger (Waxhaw, N.C.) picked up the S.T.U.D. Award for training at an unbelievable level daily all while switching between middle and sprint groups at practice.

Robert Katz (Brockton, Mass.) picked up the team’s Diver Dude honors after overcoming a mid-season illness to reach the finals on both boards at the A-10 Championships. Katz went on to finish sixth in the 3-Meter finals and seventh in the 1-Meter.

Jacques Boffa (Sliema, Malta) and Heath Brames (Cooper City, Fla.) both earned the team’s Iron Man Award for giving 100-percent effort with great attitudes all season long to set an example that was inspiring for both the coaches and the team.

Panagiotis Androulidakis (Athens, Greece) was tabbed the Coaches’ Award winner for displaying superior leadership as a team captain and a member of SAAC. Androulidakis finished the season with the team’s fastest 200 Free time, ranking fifth fastest on the UMass all-time list with a swim of 1:38.41.