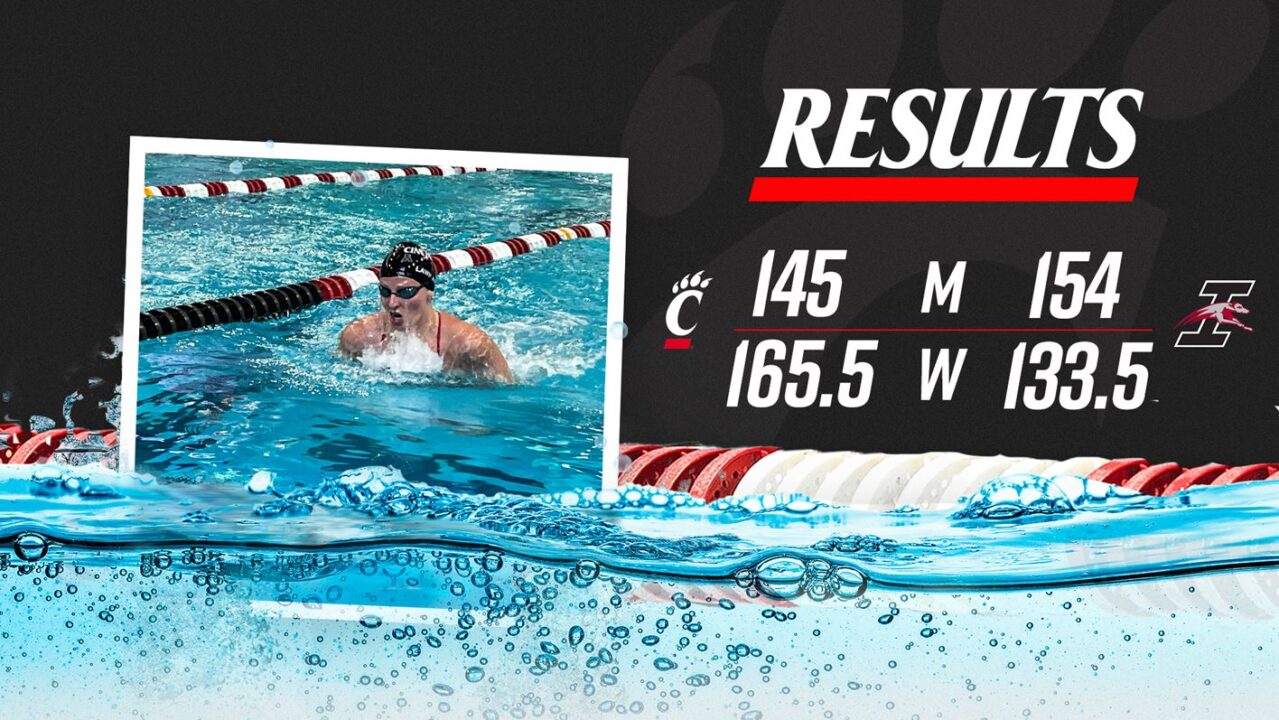 The UIndy men took down the Bearcats by a score of 154-146, marking the first time the Hounds have beaten UC. The Cincinnati women won 165.5-133.5. Current photo via Cincinnati Athletics

UW-Stevens Point Comes Away With Sweep At Wheaton Invitational

The Pointers won the Wheaton invite with the men’s team finishing with a score of 1261.5 and the women putting up 870.5 points.

CINCINNATI, Ohio – The preseason No. 1-ranked University of Indianapolis swimming & diving teams took to the pool this afternoon against NCAA Division I member Cincinnati, where the men’s squad grabbed the victory while the women just fell short.

The men took down the Bearcats by a score of 154-146, marking the first time the Hounds have beaten UC. The women had a competitive afternoon but ultimately fell short 146-133.5. Overall, UIndy notched 14 top finishes with the men’s team claiming nine while the women’s team corralled five.

The men’s squad also claimed both relay wins in the pool. In the 200 medley relay, the quartet of Silva, Jeron Thompson, Jan Zuchowicz, and Kael Yorke won at a time of 1:29.44. Also adding a top-place mark was the 200 free relay of Silva, Rodriguez, Aqeel Joseph, and Diego Mas at 1:21.51.

Moving over to the women’s side, the trio of Julia Simioni, Johanna Buys, and Marizel van Jaarsveld all collected individual victories in the pool for the Hounds. Simioni won the 100 breast by touching the wall in 1:04.93 (new eighth-fast time in school history). Buys took to the pool in the 50 free and corralled a winning-finish of 23.49, which earned her a B-standard. Finally, Jaarsveld was crowned the winner of the 200 fly at 2:07.63.

Similar to the men, the women’s squad also tallied top finishes in both the relays. Buys and Jaarsveld teamed up with Kaitlyn McCoy and Krystal Caylor in the 200 medley relay and won at a mark of 1:44.47. Also finding a top time was Buys, Caylor, Leticia Vaselli, and Julia Magierowska in the 200 free relay (provisional mark of 1:33.81).

In the diving, Sarah Kerbrat was the top-finisher for the Hounds in the 1-meter at third place. Alexis Lumaj was right behind Kerbrat in fourth while Emma Weisgerber tallied sixth. The 3-meter was led by Lumaj in second-place while Kerbrat and Weisgerber went third and fourth, respectively.

HOUND BYTES
Final thoughts on the men’s performance from head coach Jason Hite:
“I thought it was a good win on the men’s side, especially since it was the first time we’ve beaten [Cincinnati]. Winning both relays was huge for us, and I am super happy in us being able to travel here and get a win while producing some solid in-season times.”

Final thoughts on the women’s performance from Hite:
“Our women battled hard so it’s tough to see them come up short like they did. Similar to the men, it was great seeing them win both relays and overall I thought they swam pretty good for it being this point in the season.”

UP NEXT
The Hounds will return home on Friday, Nov. 5 to battle McKendree beginning at 2 p.m.

CINCINNATI – University of Cincinnati swim & dive teams split their first meet of the season with Indianapolis University on Friday afternoon at Keating Aquatics Center. The men lost 154-145 and the women won with a score of 165.5-133.5.

UP NEXT
The Bearcats make the trip up to Columbus for the Ohio State Invite from November 18th to the 20th.