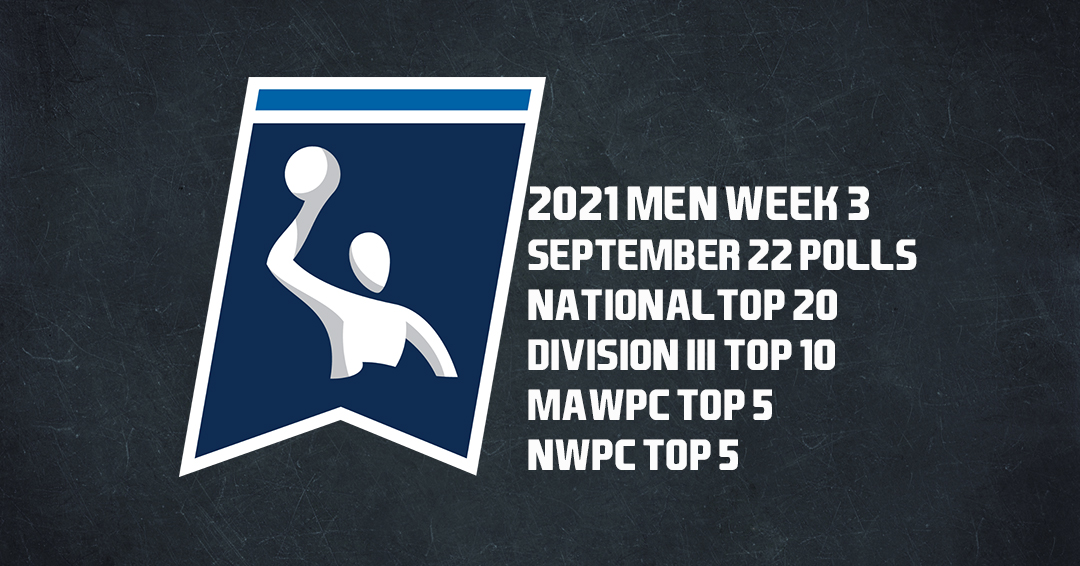 UCLA regains possession of the No. 1 spot after tying with USC in last week's poll, while Pomona-Pitzer Colleges retains the top spot in Division III. Current photo via Collegiate Water Polo

UCLA regains primary possession of the No. 1 spot after tying with USC in the National Top 20 poll last week, while Pomona-Pitzer Colleges retains sole custody of the top spot in the Division III Top 10 ranking. Fordham University breaks up a three-way tie at No. 1 with Bucknell University and the United States Naval Academy from seven days ago to attain the top spot in the Mid-Atlantic Water Polo Conference (MAWPC) Top Five.  Further, Princeton University remains unchallenged for the lead position in the Northeast Water Polo Conference (NWPC) Top Five ranking.

The Bruins (99 points), who defeated the University of Southern California (95 points) for the delayed National Collegiate Athletic Association (NCAA) Championship earlier this year, regain unchallenged possession of the lead position after tying with the Trojans last week.  UCLA previously rated at No. 1 in the final Winter 2021, 2021 Preseason and Week 1 polls prior to USC sharing the No. 1 berth last week.

USC remains on the heels of the Bruins at No. 2, while Stanford University (88 points) and the University of California (88 points) return to a deadlock at No. 3.

Pacific drops back to No. 8 with the University of California-San Diego (57 points) acquiring company at No. 9 from Princeton University (57 points) to complete the Top 10.

San Jose State University (48 points) hangs on at No. 11 for another seven-day run with Pepperdine University (46 points) taking over at No. 12.

Pomona-Pitzer (100 points), which was ranked at No. 3 in the Preseason balloting, is a unanimous top selection for the third week in a row.  California Lutheran University (95 points), Whittier College (89 points), Claremont-Mudd-Scripps Colleges (86 points), the Massachusetts Institute of Technology (75 points) and Johns Hopkins University (73 points) hold on at No. 2-to-6.

The Bronx is up this week as Fordham University takes over sole possession of the lead berth in the 2021 Week 3/September 22 Mid-Atlantic Water Polo Conference (MAWPC) Top Five Poll.

Fordham (98 points), which was tied with defending league champion Bucknell University and the United States Naval Academy (97 points) last week, inches in front of the Midshipmen by a single point.  Wagner College (88 points) moves up to No. 3 with Bucknell (85 points) sliding to No. 4.

George Washington University (82 points) rounds out the Top Five by moving back to No. 5.

The 2018 NWPC Champion Tigers (100 points) – who were tied with three-time (2016, 2017, 2019) NWPC Champion Harvard University at No. 1 in the Preseason voting prior to assuming status as a unanimous top selection the past two weeks – retains a five point lead over Harvard (95 points).

The remainder of the Top Five remains unchanged as Brown University (89 points), St. Francis College Brooklyn (86 points) and Iona College (48 points) remain at No. 3-to-5.

A seven-team conference, the NWPA is comprised of Brown, Connecticut College, Harvard, Iona, the Massachusetts Institute of Technology (MIT), Princeton and St. Francis Brooklyn for the 2021 season.