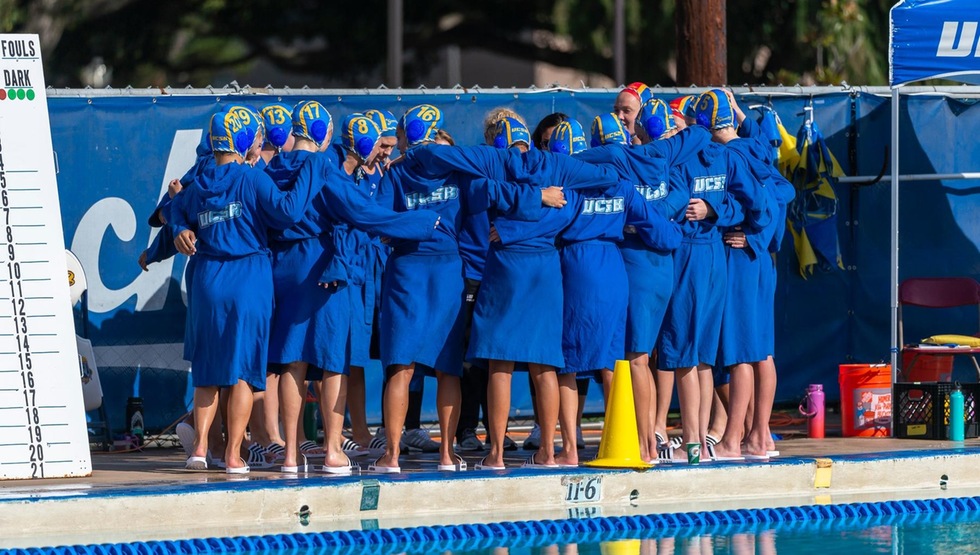 The Gauchos will play the Tritons in a pair of Big West matchups on Friday, March 26 and Saturday, March 27 at Triton Pool. Archive photo via UC Santa Barbara Athletics

• Live Stream and Live Stats Available
UC San Diego will provide a live stream of this weekend’s action on BigWest.TV, accessible via the links above or on the UCSB schedule page. Live stats for both games will also be available on The FOSH.

• Conference Play Continues
In the 2021 season, UCSB will play a modified format against its conference foes. The Gauchos will face each league opponent twice, with the first game counting towards conference standings and the second being a non-conference contest. After taking on UC Davis in its conference and home opener last weekend, UCSB now travels down to San Diego for its first-ever Big West matchup against the Tritons. Following a bye week, the Gauchos play against Hawai’i in their first games in April. The team then closes out its conference schedule with road trips to UC Irvine on April 17 and Long Beach State on April 23 and 24. The 2021 Big West Women’s Water Polo Tournament will be held at UC San Diego’s Triton Pool on the weekend of April 30-May 2. This year’s NCAA Division I Women’s Water Polo Tournament will take place in Stockton, Calif. at Pacific’s Chris Kjeldsen Pool May 14-16.

• Keep a Good Thing Going
With the victory of UC Davis this past weekend, the Gauchos have now won their Big West Conference opener in each of the past three seasons, all three times at home. In 2019, UCSB took down UC Irvine 6-5 thanks to a pair of goals from both Sarah Snyder and Kate Pipkin. Last season, UCSB defeated CSUN 9-8 in overtime thanks in no small part to an Amanda Legaspi hat trick and a Sarah Snyder game winner in what was ultimately the final game before the 2020 season was stopped and eventually canceled due to the COVID-19 pandemic.

• The Gaucho Rewind: Week Four
Game one: No. 9 UCSB 12, No. 11 UC Davis 10: The Gauchos led 5-4 at the end of the first period, but it wasn’t until the second period in which the Gauchos would begin to take control of the game, with Amanda Legaspi scoring to make it 6-4 with 6:41 remaining in the half and Claire Kelly answering to the Davis response to make it 8-5. UCSB held its lead throughout to pick up its first Big West Conference win of the season.

Game two: No. 11 UC Davis 11, No. 9 UCSB 9: Despite Nina Munson‘s four goals and a late rally to get the Gauchos within one, UC Davis had already done its damage with six unanswered goals that broke an early 2-1 deficit and gave them a 7-2 lead late in the third period.

• Scouting the Opposition: UC San Diego
UC San Diego is 5-3 on the season and 1-0 in Big West play. The Tritons have claimed a pair of wins over both San Diego State and Cal Baptist in non-conference play and managed to upset Hawai’i for their lone Big West win. Grace Pevehouse scored four goals, including the game-winner with 4:55 left in the fourth period, and both Tera Richardson and Annika Arroyo recorded hat tricks as UC San Diego took down the seventh-ranked Rainbow Wahine on March 10. Hawai’i dealt UC San Diego a loss in the non-conference portion of the doubleheader later that day.

• Kay Reaches 100
UCSB head coach Serela Kay achieved career wins 99 and 100 in the Gauchos’ opening weekend doubleheader at San Diego State, in which they beat the Aztecs 10-9 and 5-4. Kay, the winningest coach in program history, is in her seventh season at the helm of the Gauchos with a 101-76 record. In 2019, she guided the Gauchos to a program-record 22 wins.

• The Amazing Amanda Legaspi
Junior attacker Amanda Legaspi scored a season-high five goals in UCSB’s near-upset of fifth-ranked Cal earlier in the season. Legaspi scored twice in the first half before tying the game up 6-6 in the third quarter. Cal pulled away and would maintain the lead for the rest of the contest, but Legaspi helped get the Gauchos back within one on two separate occasions.

• Courtney Gets It Done
Sophomore attacker Courtney Heydorff helped the Gauchos secure the win in their opening game of the 2021 season on Feb. 27 with a five-goal showing in UCSB’s 10-9 win over No. 17 San Diego State. Her first goal gave the Gauchos a 4-1 lead in the first period, but later in the contest she put a hat trick together within a six-minute span in the third period that helped UCSB create some separation from a surging San Diego State squad. Her final goal ended up being the game-winner with 1:07 left in regulation.

• 2020 in Review
The Gauchos finished the shortened 2020 season with a 12-8 record. It began with a 9-8 upset victory over No. 2 UCLA in the Gauchos’ home opener, their first win over the Bruins since 1995. That victory propelled them into a 6-2 start to the season, including wins over No. 23 Indiana, No. 24 Marist, and No. 21 Wagner at the Michigan Invite in Ann Arbor, but they lost in the tournament finale to No. 7 Michigan. UCSB then headed to the Triton Invitational in San Diego and achieved a fifth place finish, and it was followed up with a seventh place finish the following weekend at the Barbara Kalbus Invitational in Irvine. The Gauchos closed out the season with wins over Claremont-Mudd-Scripps and Pomona-Pitzer at the Claremont Convergence tournament before playing a lone Big West Conference game against CSUN before the season was abruptly canceled.