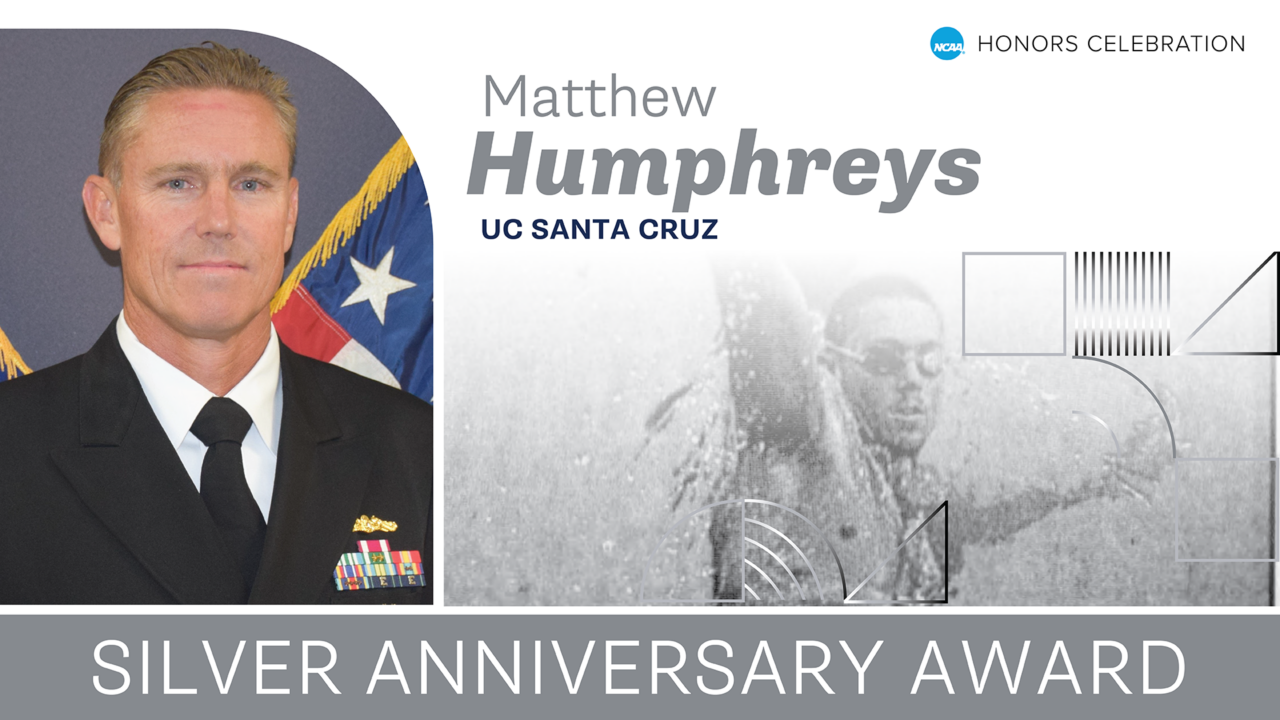 Two swimmers are among six announced winners of 2022 NCAA Silver Anniversary Awards in recognition for their collegiate and professional achievements.

The Silver Anniversary Award annually recognizes distinguished individuals on the 25th anniversary of the conclusion of their college athletics careers. Representatives of NCAA member schools and conferences, along with a panel of former student-athletes, select each year’s recipients.

Duncan, meanwhile, is most-recognized for his work as a professional basketball player in the NBA, but he too was an aspiring swimmer as child in the U.S. Virgin Islands until Hurricane Hugo destroyed his training pool. He then picked up basketball in 9th grade, becoming

Two-time national champion swimmer Maiya Anderson earned individual titles at the 1994 and 1995 NCAA Division II championships and led Air Force to team titles at the 1995 and 1996 championships. Anderson was a 12-time College Swimming and Diving Coaches Association of America All-American and earned Air Force’s 1996 Most Valuable Swimmer of the Year and 1997 Most Valuable Female Athlete of the Year. The team captain earned CSCAA All-Academic honors in 1995, graduating in the top 5% of her class with distinction in academic, athletic and military performance. A 1997 NCAA Postgraduate Scholarship winner, she later earned a Master of Science in bioresource engineering from Oregon State, where she was a member of the intercollegiate rowing team. She also earned a Master of Education in intercollegiate athletic leadership from Washington and a Ph.D. in physical education from Ohio State. In 2000, Anderson was deployed to the Middle East as the sole Air Force bioenvironmental engineer in the region supporting the occupational and environmental health of more than 10,000 U.S. and NATO troops. During her career, Anderson coached and taught at the academy and provided occupational and environmental health services to multiple Air Force bases in the U.S. and overseas, including operations in Ecuador and Iceland. Over the years, she was a member and later coach of the Department of Defense triathlon, orienteering and military pentathlon teams representing the U.S. military in various international competitions. As commander of the 30th Medical Operations Squadron, Anderson led 135 medics providing health care and preventative medicine services to 14,000 personnel and beneficiaries. Now a permanent professor and head of the physical education department for Air Force, she leads 85 instructors implementing the physical education curriculum, fitness testing and intramurals for the academy’s 4,000 cadets.

Cmdr. Matthew Humphreys was a 19-time College Swimming and Diving Coaches Association of America All-American and won the 1996 NCAA Division III national championship in the 200-yard individual medley. He is one of the most decorated swimmers in UC Santa Cruz program history and still holds school records in three events. After graduation, Humphreys was an emergency medical technician and beach lifeguard sergeant in Coronado, California, where he was named Lifeguard of the Year by his peers in 1999 and 2000. He made over 200 saves in his career and the Coronado City Council denoted May 6, 2003, as Matthew Humphreys Day. Humphreys joined the U.S. Navy and graduated from the Uniformed Services University of the Health Sciences-Walter Reed Hospital in Bethesda, Maryland, in 2007 before completing his medical residency at UC San Diego. He is dual board certified in preventive medicine and occupational medicine and has received the Meritorious Service Medal, Joint Service Commendation Medal and Navy Commendation Medal. During his service, Humphreys saved a submariner who was seriously injured in an accident and helped care for 41 refugees rescued from a capsized vessel. From 2009-10, he worked with Explosive Ordnance Disposal Mobile Unit 8 and helped select American Special Forces to reestablish the U.S. Embassy in Libya. In 2020, Humphreys was deployed onboard the USS Theodore Roosevelt supporting COVID-19 relief efforts. He currently serves as the Navy’s public health emergency officer for the western U.S. and Pacific region.

Power forward Tim Duncan was named the 1997 National Association of Basketball Coaches Player of the Year and was national Defensive Player of the Year three times. He was a two-time NABC first-team All-American and graduated as the Atlantic Coast Conference career leader in blocks (481). Duncan was drafted first overall in the 1997 NBA draft by the San Antonio Spurs. He went on to earn NBA MVP honors twice and was a five-time NBA champion with the Spurs. Duncan was named NBA Finals MVP in 1999, 2003 and 2005. He earned first-team All-NBA honors 10 times and first-team NBA All-Defensive honors eight times. Sports Illustrated named Duncan the Sportsman of the Year in 2003, and USA Basketball awarded him Male Athlete of the Year the same year. He earned a bronze medal with Team USA at the 2004 Olympic Games. He was inducted into the Naismith Memorial Basketball Hall of Fame in 2020, and his jersey was retired by the San Antonio Spurs and Wake Forest. In 2001, he founded the Tim Duncan Foundation to fund programs focused on education, health awareness and research, and youth sports and recreation in San Antonio, the U.S. Virgin Islands and Winston-Salem, North Carolina. The foundation has sponsored the Tim Duncan Bowling for Dollar$ Charity Bowl-A-Thon and the Slam Duncan Charity Golf Classic. From 2001-02, the foundation raised $350,000 for breast cancer and prostate cancer research, and he has led other fundraising efforts for hurricane relief and children’s education. In 2015, Duncan was named the NBA Teammate of the Year for his charitable contributions. He has also supported the Children’s Bereavement Center, the Children’s Center of San Antonio and the Cancer Therapy and Research Center.

Warrick Dunn contributed to Florida State’s first football national championship in 1993. He received first-team All-America honors from the Football Writers Association in 1996 and first-team U.S. Track and Field and Cross Country Coaches Association All-America honors in the outdoor 4×100-meter relay in track and field the same year. Dunn became the first player in Florida State history to rush for 1,000 yards in three different seasons and was the Sugar Bowl MVP his sophomore year. He ranks first in career 100-yard rushing games (22), second in career rushing yards (3,959) and third in rushing touchdowns (37) and added 1,314 receiving yards and 12 receiving touchdowns in his career. Dunn was selected 12th in the 1997 NFL draft. He produced 10,967 rushing yards, 15,306 all-purpose yards and 49 touchdowns across 15 seasons and was selected to the Pro Bowl three times. He was inducted into the Atlanta Falcons Ring of Honor in 2017 and was nominated to the Pro Football Hall of Fame in 2021. Dunn received the 2004 Walter Payton NFL Man of the Year Award, the 2009 Bart Starr Award, the 2010 Heisman Humanitarian Award and the 2011 Jefferson Humanitarian Award for Public Service. Dunn founded Homes for the Holidays in 1997, as a tribute to the legacy of his mother, Betty Smothers. The program provides single-parent families with a fully furnished home in addition to down-payment assistance. As part of his journey assisting 199 families, Dunn has helped create and institute programs to educate and economically empower families (Count on Your Future), provide educational assistance (Hearts for Community Service scholarship program), and address food insecurity and healthy eating (Sculpt workshops). He is a co-founder of Athletes for Hope, a philanthropic nonprofit for athletes who want to give back. Dunn has received numerous awards for his service, including the Giant Steps Award from former President Bill Clinton.

Katie King Crowley was a three-time Ivy League Player of the Year and the 1997 Eastern College Athletic Conference Player of the Year in hockey. She set school records for career points (206), goals in a season (40), goals in a career (123) and points in a season (71). In softball, King Crowley was named 1996 Ivy League Player of the Year and 1997 Pitcher of the Year, setting Brown career records for games (120) and innings pitched (709). She finished second in career wins (54) and strikeouts (264). A two-time team captain in hockey and three-time team captain in softball, she received the university’s Marjorie Brown Smith Award as Outstanding Female Athlete in 1997. She was inducted into the Brown Athletics Hall of Fame and was named to the 1990s ECAC All-Decade team for hockey. King Crowley earned a gold medal in hockey at the 1998 Winter Olympic Games, a silver medal in 2002 and bronze medal in the 2006. She led Team USA to its first International Ice Hockey Federation World Championship gold medal in 2005. Her 14 career Olympic goals are tied for first all-time with Team USA, and she and her 1998 Olympic teammates were inducted into the U.S. Hockey Hall of Fame in 2009. King Crowley is the head women’s ice hockey coach at Boston College, where she was named national Coach of the Year in 2015 and 2016. She has led the program to 11 NCAA tournament appearances and six NCAA Frozen Four appearances while winning more than 300 games. She coached Patty Kazmaier Award winners in 2015 and 2018.

Forward Tina Thompson, a 1997 U.S. Basketball Writers Association All-American and an Associated Press second-team All-American, helped Southern California to three NCAA tournament appearances, including an Elite Eight appearance in 1994. Thompson is still second in school history for points in a game (49) and ranks fifth in career points (2,248) and rebounds (1,168). In 1997, Thompson became the first college player ever drafted in the WNBA, and she went on to be a four-time WNBA champion with the Houston Comets. A three-time first-team All-WNBA selection and five-time second-team All-WNBA honoree, she garnered nine WNBA All-Star appearances in her career. Thompson retired from the Seattle Storm as the WNBA’s all-time leading scorer (7,488) in 496 games. She earned gold medals with Team USA at the 2004 and 2008 Olympic Games. Thompson was inducted into the Naismith Memorial Basketball Hall of Fame and Women’s Basketball Hall of Fame in 2018. She helped coach Texas to a quarterfinal appearance in the NCAA tournament in 2016 and third-round appearances in 2017 and 2018. Thompson received the Triumph Award from the Rev. Al Sharpton’s National Action Network in recognition of her work in sports and the community. She helped organize the For The City charity basketball game to provide high-quality, low-cost sports opportunities for underserved youth in Los Angeles. Thompson has advocated for diversity and inclusion in college athletics and currently serves as head women’s basketball coach at Virginia.

Tim Duncan is also the greatest Bball player of all time but I guess that goes without saying.

Is he even the best player from Wake Forest? Probably but debatable. Also: Warrick Dunn is a part owner of the Atlanta Falcons.