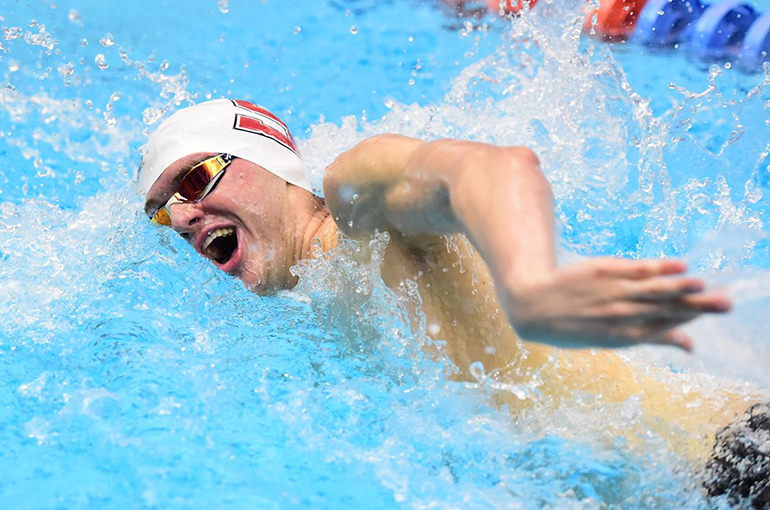 A pair of men's relay records fell for Franklin & Marshall in the 200 medley and Swarthmore in the 800 free. Current photo via Centennial Conference

GETTYSBURG, Pa. – The 2020 Centennial Conference Swimming Championships got off to a torrid start on Thursday night at Gettysburg with a pair of record-breaking relay performances.

In the fourth and final event of the evening, Swarthmore’s men’s 800 freestyle relay team of Ethan Bergmann, Alec Menzer, Alec, Alec Lawless and Ben Freeman swam to a time of 6:39.82, shattering the previous Centennial Conference, championship meet and Gettysburg pool records. The previous championship record (6:42.03) was set by Swarthmore last year, the conference record (6:42.03) was a 2013 Gettysburg mark, and the pool record (6:41.48) was set by Johns Hopkins in 2011.

On the women’s side, relay victories went to Gettysburg in the 200 medley and Swarthmore in the 800 freestyle. The Gettysburg quartet of Hannah Wasson, Katie Cooper, Elissa Clancy and Kate Crilly won the 200 medley with an NCAA ‘B’ cut time of 1:44.30, whille the Garnet team of Anna Kottakis, Sophia Lee, Anna Lyn and Hannah Kloetzer touched first in the 800 freestyle with an NCAA ‘B’ cut of 7:38.37.