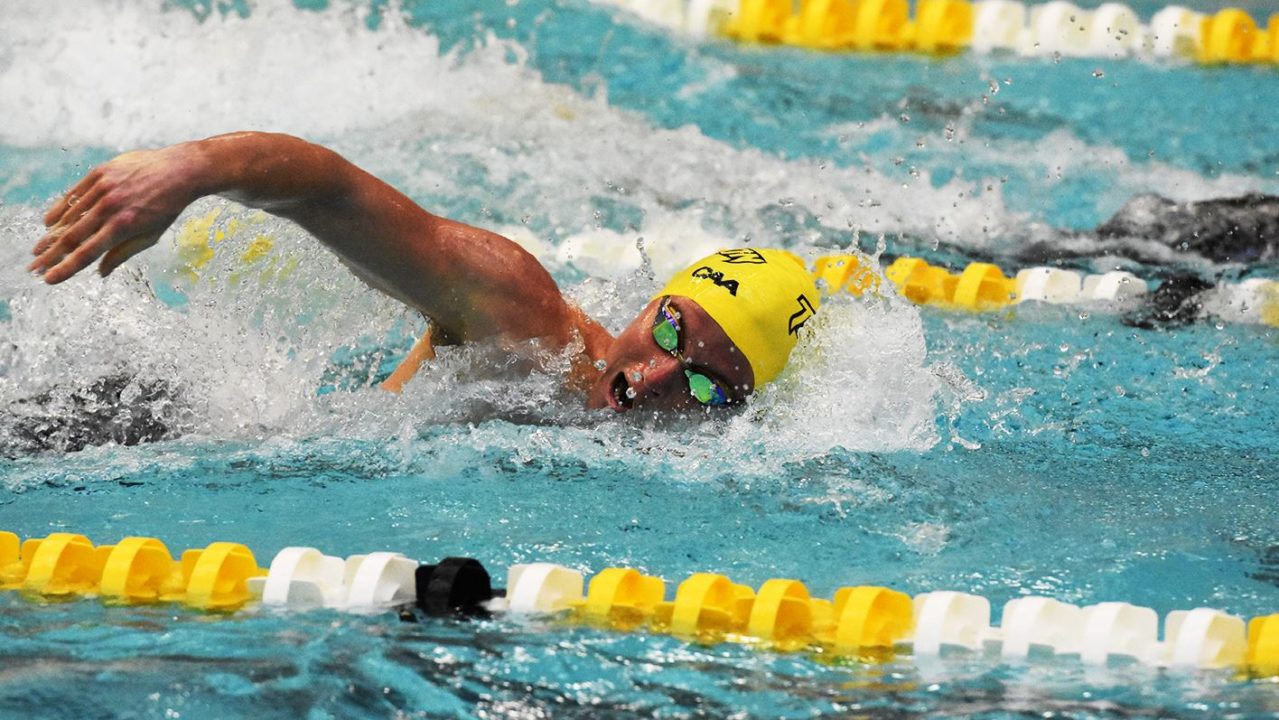 Putting the final touches on a strong dual meet season, the Towson University men's team picked up its fifth-straight win over the University of Delaware. Current photo via Towson Athletics

NEWARK, Del. — Putting the final touches on a strong dual meet season, the Towson University men’s swimming and diving team picked up its fifth-straight win over the University of Delaware. The Tigers topped their longtime rivals 164.5-123.5 behind 11 individual and relay wins. Rookie Brian Benzing capped his first dual season unblemished in the 100-yard breaststroke events this spring.How it Happened

NEWARK, Del. — In the final dual meet of an abbreviated 2020-21 season, the Towson University women’s swimming and diving program was edged 182-118 against Delaware on Saturday at Rawstrom Natatorium.Towson (2-2) picked up four wins in total, opening the day with a relay win followed by a one-two finish in the 1,650-yard freestyle from Meagan Clark and Karlee Carminati.How it Happened

NEWARK, Del. – The University of Delaware swimming & diving teams played host to CAA foe Towson Saturday afternoon with the women earning a 182-118 victory, while the men fell in a 164.5-123.5 decision in Rawstrom Natatorium.

It snapped a 17-meet losing streak for the Blue Hen women against the Tigers, with the last Delaware win coming Jan. 7, 2006 in Newark.

“We had a fantastic showing this weekend, starting with our divers achieving three zone cuts and the swimming side who faced a tough opponent and delivered on every event,” said head coach Pablo Marmolejo. “We fought well throughout the meet and overall, we are happy with the results and the progress we have made.”

Sophomore Mira Selling was as advertised, getting to the wall first in three events. She swam a time of 1:51.62 in the 200-yard freestyle, 51.81 in the 100 free and a 5:08.23 in the 500 free. Selling was also part of the 400-yard freestyle relay team that placed first, along with senior Audrey Duvall, sophomore Natalie Dobrzykowski, and freshman Nicole Chiappa.

The Blue Hens are back in the water March 12, hosting Drexel for the final dual meet of the season.