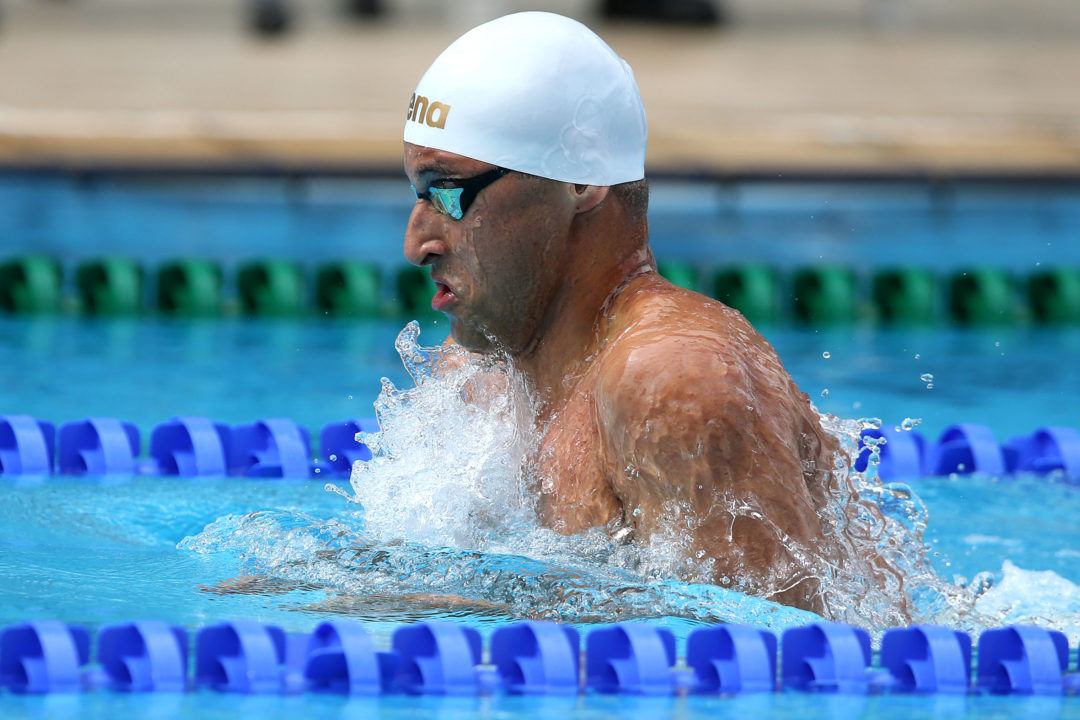 The Mare Nostrum record book took a beating over the weekend, as did some nations’ national record lists, as elite swimming stars rocked it out in Monaco. There were more than a handful of tremendous swims worth nothing, but we tried to narrow down our top picks from the first stop, with Canet gearing up already tomorrow, June 11th.

Top 5 Swims of Mare Nostrum – Monaco (in no particular order)

Brazilian Felipe Lima is seemingly ageless, as the 34-year-old bronze medalist in the 50m breast at last year’s Short Course World Championships crushed a big-time 26.33 50m breast in Monaco. Entering the meet, Lima’s personal best was 26.48, but the man managed to shave .15 off of that mark to check-in with a new South American Record. Lima’s time also checks the Brazilian in on the all-time performances list in the 6th slot, an exclusive list considering British beat Adam Peaty’s name occupies positions 1-5.

In terms of all-time performers in the 50m breast, Lima’s name is now entered behind Peaty as follows, again, at 34 years of age:

University of Michigan dynamo Siobhan Haughey is a formidable force for Hong Kong when competing internationally, as evidenced by her 3 National Record-breaking swims over the weekend.Among her feats at the meet, the 21-year-old became the first-ever woman from her nation to dip under the 25-second barrier in the women’s 50m freestyle, clocking a new national standard of 24.85 when all was said and done in Monaco.

Entering the meet, Haughey held the Hong Kong record with the 25.38 she set way back in 2013. She first chopped that down to 25.21 in heats of the women’s 50m free skins, then dipped under 25 with a 24.87 in the semi-finals to make history. In the final race of the 50m free, Haughey punched the board in 24.85 to give the record a rest, but further cement herself as a pioneer of Hong Kong women’s swimming.

Honorable mention alongside Haughey is her teammate Stephanie Au, who notched a National Record of her own in the women’s 50m back of 27.98, becoming the first woman from her nation to break the 28-second barrier.

Perhaps inspired by fellow Brazilian Felipe LIma, 21-year-old Jhennifer Conceicao busted out a 50m breaststroke Continental Record of her own. She registered a mark of 30.42 for runner-up in Monaco behind Russian Yuliya Efimova’s 30.04, but her time was enough to slice off .05 from her own South American mark of 30.47.

That record was new in itself, with Conceicao having just clocked it last month at the Brazil Trophy. With her outing at this Mare Nostrum meet, the Brazilian checks-in with Italian 14-year-old Benedetta Pilato as the 4th fastest swimmer in the world this season.

Hungary’s Iron Lady solidified herself as the 400m IM queen, at least for the weekend, having secured the Monaco meet win in a monster time of 4:32.87. That beat the next closest competitor in the race, USA’s Madisyn Cox by almost 5 seconds, and also checks-in as Hosszu’s best time of 2019.

She now sits just .87 away from taking over the 400m IM world rankings crown, which is currently held by Japan’s own superstar in this event Yui Ohashi, setting up a potentially scary battle come Gwangju next month. Hosszu’s 4:32.87 time also overtook the Hungarian’s own Mare Nostrum-Monaco meet record of 4:33.80 that’s been on the books since 2014.

Less than a year after shoulder surgery, 29-year-old Bruno Fratus came within .04 of his own lifetime best in the men’s 50m freestyle. Going head-to-head with Greek National Record holder Kristian Gkolomeev, Fratus fired off a winning 50m free mark of 21.31. That crushed his season-best and previous world #1 mark of 21.47 from the Brazil Trophy. He also now enters the all-time top performers list at #14, moving ahead of America’s Nathan Adrian and Anthony Ervin.

For his part, Gkolomeev’s 21.54 runner-up time was just .10 off of his own PB and Greek NR, placing him now 4th in the world this season.

Can’t wait for Canet tomorrow, looks like there is more depth. Very excited to see how the British squad get on.

I think sprinters can be fast well into their 30s