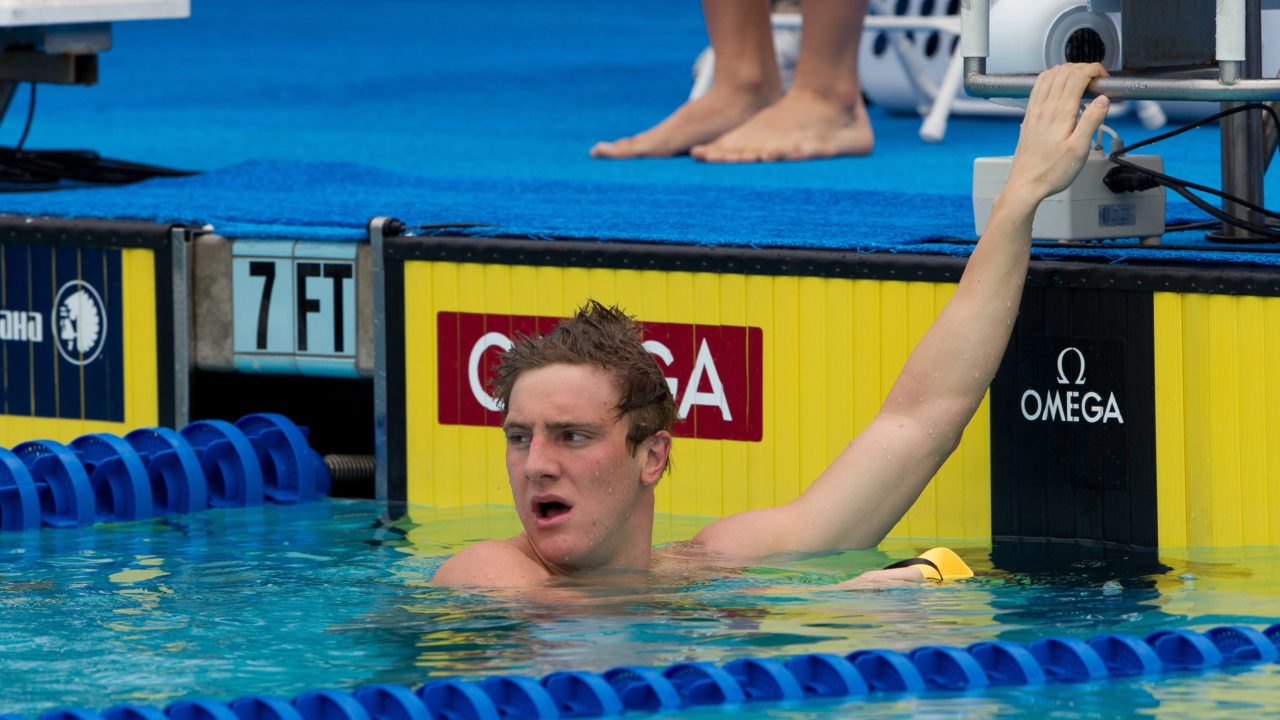 Tommaso D'Orsogna will represent Perth in front of a home crowd at the 2014 BHP Billiton Aquatic Super Series. Archive photo via Tim Binning/TheSwimPictures.com

Western Australian Olympian Tommaso D’Orsogna has been named on the Australian Swim Team to compete at the BHP Billiton Aquatic Super Series starting this Friday, replacing the injured James Roberts.

The London Olympian who was born in Perth and currently trains in Brisbane with Simon Cusack will join the Australian team when they assemble in Perth tomorrow, with Roberts resting a back injury ahead of the Australian Championships and Trials in April.

Swimming Australia National Head Coach Jacco Verhaeren said D’Orsogna is the ideal replacement for Roberts ahead of the meet, which will see Australia take on Brazil, China, Japan and South Africa over two nights of racing in Perth.

“It’s disappointing for James that he will miss competing in Perth and we wish him well for his recovery and the Trials,” said Verhaeren.

“Tommaso is experienced at international level, he has swum relays for Australia before and he’ll be swimming in his home town of Perth. He is a good addition to our team.”

D’Orsogna swam at the WA State Championships at Challenge Stadium last week and said the opportunity to race in front of friends and family in the West is something he’s really looking forward to.

“This will be the first time since 2009 that I’ve been able to represent Australia on home soil, and to be able to do it here in Perth is awesome,” said D’Orsogna.

“Perth has such a great history of international swimming at Challenge Stadium, with the world championships in 1991 and 1998. This event will add to that, and give Western Australians another chance to see some world class swimming.”

D’Orsogna, joins Sally Foster and Katherine Downie as three Perth locals on the swim team for the BHP Billiton Aquatic Super Series, while Rhys Mainstone and Simon Huitenga are expected to lead the way in the men’s open water 10km ‘Swim the Swan’ on Sunday 2 February.

With some members of the Australian Swim Team already in Perth for the meet, the remaining athletes will arrive in WA tomorrow before assembling for the first time this year, and the first time under new Head Coach Verhaeren.

Tickets to the 2014 BHP Billiton Aquatic Super Series on Friday 31 January and Saturday 1 February are available through www.ticketmaster.com.au

The Australian Swim Team for the 2014 BHP Billiton Aquatic Super Series is as follows:

The above is an unedited press release submitted by Swimming Australia.