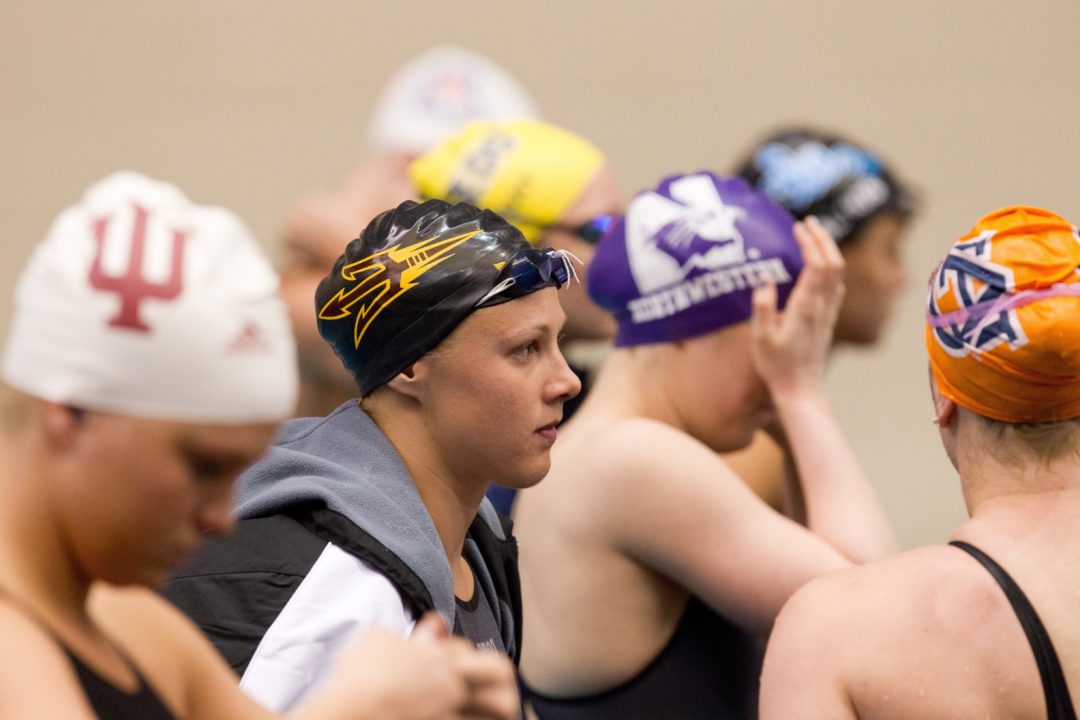 Rebecca Ejdervik is among swimmers taking a last stab at the Olympics this weekend (photo courtesy: ©Tim Binning/TheSwimPictures.com)

This weekend, with the June 18th qualifying deadline coming up on Monday, is the final opportunity for swimmers around the world to hit their Olympic qualifications. Whether that means hitting FINA A times, FINA B times, improving their existing B times, or meeting another arbitrary standard set by their federations, come Monday all times must be submitted, with official invitations being sent out to federations of the B-time invites on Wednesday.

There are a few big (and some less-big) meets where this will be a big focus; and most of these meets will have great competition to spur them on.

Sette Colli Trophy – Rome – aside from the massive field of Olympic contenders that will be present in Rome for the 7 Hills, there will be a large contingent of Europeans trying to seal up their Olympic qualification. Among those will be Arizona State swimmer Rebecca Ejdervik, who will be trying to grab Sweden’s second Olympic breaststroke roster spot behind Jennie Johansson. Publicly, it’s not been made clear what time exactly Ejdervik needs to swim to make the team, but her 1:07.5 from last season (which puts her near the world’s top 16) would seem to give the Swedish Olympic Committee serious consideration.

RBC Bahamas National Championships – Nassau, Bahamas – The star here is Arianna Vanderpool-Wallace, who is the fastest 100 yard freestyler in history, who will likely be racing her last meet pre-Olympics before heading off to camp in Southern England in early July. Her speed eliminates Universality invites for the islanders, but look for Elvis Burrows (50 free) and Anna Dillette (100 back) to shoot for their FINA B-cuts.

Southeast Asian Swimming Championships – Singapore, Singapore – The 1st annual Southeast Asian Swimming Championships kicked off Wednesday in Singapore and will run through Sunday. Through one day of competition, Vietnam 15-year old Thi Anh Nguyen has been the star, nabbing a pair of FINA B-times in the 200 back (2:13.84) and 200 IM (2:17.67). Singapore’s own Chui Bin Ong also hit her B-Time in the women’s 100 free with a 56.02.

Golden Bear 2012 – Zagreb, Croatia – The Golden Bear meet in 2012 has a slightly lighter field than normal, but there are still a few stars. That includes Israel’s Nimrod Shapira Bar-Or and former NCAA Champion Damir Dugonjic.

Psych Sheets.
Results will be available on the Croatian Swimming Federation website.

Budapest Open Cup – Budapest, Hungary – The Budapest Open Cup will have a few big local names, including distance swimmer Gergo Kis and his countrymate Gurgely Gyurta. A large contingent of Czech swimmers will be at this meet as well trying to nail down Olympic qualification. Kis won the 200 free on the first day in 1:51.32; he’ll be shooting for the 1500 in London.

Copa Mexico – Puerto Vallarta, Mexico – The meet in Veracruz will be the final chance for many Mexican swimmers, with their federation having still not officially announced an Olympic roster. Those who we know will be in attendance are former Texas Longhorn Susana Escobar. The meet is off to an auspicious start – the water temperature in the outdoor course is a steamy 88 degrees.

Ejdervik, who followed Demerae Christianson to train at Auburn this summer before going to Europe, was a 1:08.94 in finals at Sette Colli today. With the A cut at 1:08.49and the Swedish federation requiring that swimmers show that they can compete for the top 8 places at the Olympics, it doesn’t look good for her making it, despite her 1:07.58 from 2011.By FINA rules, she could go since she has the A cut and was in the top 2 in her country, but the Swedes are making it tougher than that.

Is Thi Anh Nguyen the same person as 15 year old Vien Nguyen who showed up at a bunch of US Grand Prix meets in 11-12? (Looking at Charlotte results for the name there.)

Almost 40% of all Vietnamese people have the last name Nguyen.

But how many of them arefemale 15 year old elite 200 backstrokers?

FINA Executive Director Cornel Marculescu has been quoted elsewhere with this explanation: “On the June 18 deadline, the US will provide FINA a list of potential swimmers to qualify on the trials, and after this competition is over we will make the necessary adjustments. As you may imagine it is very unlikely that a swimmer qualified at the trials does not have previously established a OQT.”

From this, it looks like, although unlikely, it still remains a possibility that the 2nd place swimmer from the US would not get to go if they did not make the OQT.

The US has 2 or more swimmers in every event who have alrady posted an OQT in the Olympic Qualifying period, so regardless, the USA can have 2 swimmers per event at the Olympics provided the selection process has enoughdouble to permit that. It always has in the past.

When was the last time the USA sent someone who didn’t have a Fina “A” cut?

I’m confused about the June 18 deadline. Does USA Swimming get an exemption for Trials? Or does this deadline only apply to individuals?

I think the presumption is that all American qualifiers will have an automatic cut (though not a certainty with this years cuts) and thus won’t affect the 900 swimmer cap. Aka they can just chalk up the Americans to two per event and not make the rest of the world wait.