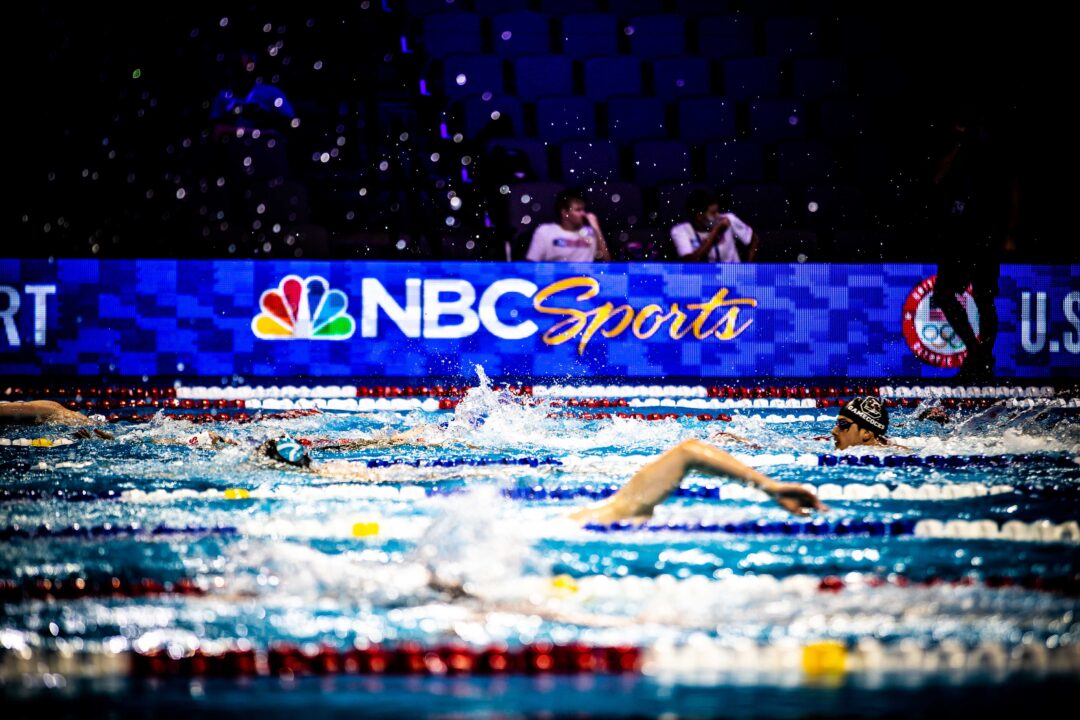 NBC will shut down the Olympic Channel, which aired the most recent FINA World Aquatics Championships in the United States. Stock photo via Jack Spitser/Spitser Photography

NBCUniversal will be shutting down the Olympic Channel on September 30. This is the second leg of NBC’s Olympic sports coverage networks that will be shut down within a year, after NBC Sports closed at the end of 2021.

NBC Sports and the Olympic Channel have been home to most swimming coverage in the United States over the last five years. That includes the most recent World Championships, which drew low ratings last week.

The channel is a franchise of the IOC’s Olympic Channel Network that is operated in the US by a partnership between NBC Sports and the USOPC.

The Olympic Channel launched in more than 35 million homes in 2017, which was just over a quarter of the American market. Current figures for the network’s reach was not available.

“In order to best reach our target audiences, we are reevaluating our programming distribution strategy regarding the content that currently airs on Olympic Channel: Home of Team USA with our partners at the IOC and USOPC,” an NBC spokesperson said in a statement. “We will be announcing our exciting new plans for Olympic content in the fall.”

NBC has re-evaluated its network of sports channels in several ways in the last year. In June 2022, they began a Direct to Consumer service for its regional sports networks.

After the shutdown of the NBC Sports Network, which in addition to Olympic coverage aired English Premier League Soccer matches, some content moved to USA Network, while other content moved to NBC’s streaming service Peacock. Peacock simulcast the recent World Championships, and is a likely destination for future swimming competitions in the US.

I love the swimming coverage on Olympic Channel, but what happens to biathlon and cross-country skiing? I guess that ALL moves over to Peacock. NBC has been RUINING its sports coverage in the past few years and takes away another two options we used to have with NBC Sports (gone) and Olympic Channel (going).

This channel was the primary reason for us keeping cable. I guess now we’ll cut ties.

As much as I love watching swimming, I won’t pay for any other streaming service. I have att u verse, which the Olympic channel is part of. Goodbye swimming. With everything doubling in price where I live, I won’t be spending any more money. With so few viewers for free, I can’t imagine any streaming service able to recoup their costs.

This sucks! I love watching Curling matches while enjoying a cold one or two.

Ratings for the China Olympics were less than half what was expected. Olympics now has pro athletes, trans athletes, druggie athletes and way too much politics. Ain’t what it used to be.

The Olympics have been “political” for nearly as long as the modern Olympics have existed. Name an Olympic games and you can most likely find either an internal or external event surrounding it that was highly political (up to and including terrorism).

Totally sucks for all Olympic sports not just swimming. Only a small portion of what’s on the Olympic channel right now will be moved over to USA and CNBC and NBC on the weekends. In addition to that the Olympic channel offers multiple repeats even months later including return to London, Rio, Tokyo. I probably watched it more than any channel on my cable channel lineup. Time to consider cutting the cord!

Seemed inevitable. This was a terrific channel a few years ago, covering all of the world cup biathlon, speed skating, cross country skiing events along with Diamond League track and field, all the curling world championships, swimming world championships and Pro Series meets, etc. But the pandemic taught NBC it didn’t need to send its announcing crew to the venues. Some sports disappeared from the lineup completely while others were demoted. I mentioned last week that overnight turned into paid programming like Cindy Crawford’s Skin Care Secrets.

This is anything but a positive move. Olympic Channel was set it and forget it. I would look at the 2-week window and tape dozens of events then watch them at my leisure.… Read more »